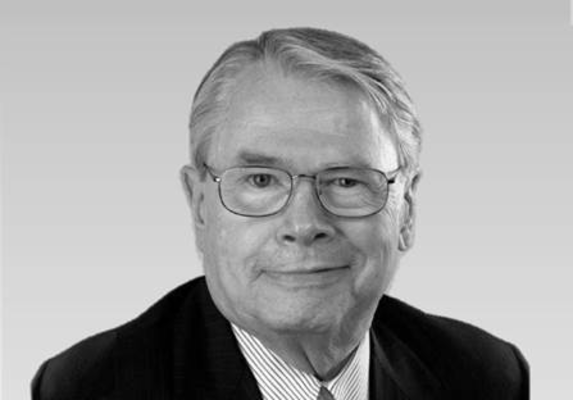 At age 86, Harold Swanson Hook passed away on Sunday, January 14, 2018 in Houston, Texas. A native of Missouri, Harold grew up on a dairy farm in the Kansas City area, and he began his education in a one-room school in Lee’s Summit, Missouri. He went on to the University of Missouri-Columbia where he received a Bachelor of Science degree in Business Administration and a Master of Arts degree in Accounting. While an undergraduate, Harold served as President of the University Student Union. As a graduate student, he also served on the faculty of the University’s School of Business. Harold held a four-year Naval ROTC scholarship, and upon receiving his commission served three years active duty on a minesweeper in the U. S. Atlantic Fleet as an executive officer and navigator.

After completing active military service, Harold joined National Fidelity Life in Kansas City, starting his 40-year career in life insurance and financial services. In 1963, at age 31, he was elected President and CEO of the Company, the youngest life insurance president in the nation.

In 1966, Harold accepted a position with United States Life in New York City and was later named President. In 1970, he was named President and CEO of Cal-Western Life in Sacramento, California, his third presidency before the age of 40.

A constant in his life was the commitment to lifetime learning, particularly in the field of management. Recognized as a management scholar and innovator, Harold was the creator of Model-Netics® – a model-based management language. The Model-Netics program has been adopted by hundreds of companies worldwide.

Harold had a passion for community service. Earning his Eagle Scout rank in his youth marked a lifetime commitment to scouting. He served two years as National President of the Boy Scouts of America. Scouting honored him with its Silver Beaver, Silver Antelope and Silver Buffalo awards. He also served as Chairman of the Life Office Management Association, Chairman of the Houston Chamber of Commerce, and director of the United States Chamber of Commerce. He was a Trustee of Baylor College of Medicine, and Director of the Greater Houston Partnership. In addition, he also served on the boards of a lengthy list of business, community, cultural, and educational organizations, both local and national.

Harold held honorary Doctor of Laws degrees from the University of Missouri-Columbia and Westminster College in Fulton, Missouri. He was inducted into the Texas Business Hall of Fame. Harold was a National Honoree of Beta Gamma Sigma, he was selected as “Man of the Year” by Delta Sigma Pi Professional Business Society, and he was the President of his college chapter of Beta Theta Pi. Texas A&M University College of Business Administration designated him as “Texas Business Executive of the Year.” Stanford Business School Alumni Association honored him as “Houston Business Man of the Year.”

Harold is survived by his college sweetheart and wife of 63 years, Joanne Hunt Hook, by his daughter Karen Hook King and grandsons James and David King, by his son Thomas Hook and his wife Laura and granddaughter Betsy, by his son Randall Hook and his wife Martha and grandsons Townsend and Matthew Hook, and by his brothers Oliver Hook of Menlo Park, CA and James Hook of Amelia Island, FL. He was preceded in death by his parents Ralph and Ruby Hook and brother Ralph Hook, Jr.
Services will be held Saturday, April 14, 2018 at 1:30 p.m. at Langsford Funeral Home, 115 SW 3rd Street, Lee’s Summit, Missouri.

There will be a reception with family immediately after the Service. Interment location: Lee’s Summit Cemetery.

The family requests, in lieu of flowers, gifts may be made in memory of Harold to the University of Missouri College of Education. Gifts can be mailed to Harold Hook Memorial, c/o MU College of Education, 118 Hill Hall, Columbia, MO 65211 or online at http://bit.ly/GivingtoMizzouEd to the Dean’s Fund for Excellence listing Harold in the “My gift is a Tribute” section.