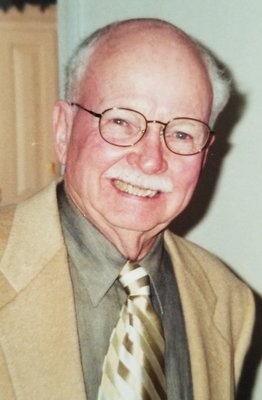 Jerry had the gift of quick feet and hands which served him well on the athletic fields and in the boxing ring. He was captain for the Hogan High School basketball squad his senior year.

Jerry served his country in the United States Navy during WWII. After the war, Jerry learned the skills to becoming a journeyman plumber following in his father’s footsteps. He was a proud member of Plumbers Local Union #8 and served several terms as their Financial Secretary.

In 1951, Jerry married the love of his life, a beautiful girl named Marlene Klinge. They raised their two children in the Hickman Mills area and would be happily married for 66 years.

When Jerry retired in 1992, they moved to Raintree Lake in Lee’s Summit. Retirement allowed for trips to Florida, but spending time with family was his greatest joy. Jerry lived his life with an absolute trust in God’s eternal promise. His family will best describe him as being generous, kind, grateful, moral, funny, and humble. These traits are all a testament to how he lived each day. Jerry loved all things Irish, ND Football, KC Sports teams, God and his family. Sunday Mass was always the highlight of his week.

Visitation will start at 9:30am, Friday, May 4th followed by The Mass of Christian Burial at 11:00am at Holy Spirit, 1800 SW State Rt 150, Lee’s Summit, MO. A luncheon in the church hall immediately afterwards. Burial procession to Mt. Olivet Cemetery will take place following the luncheon.