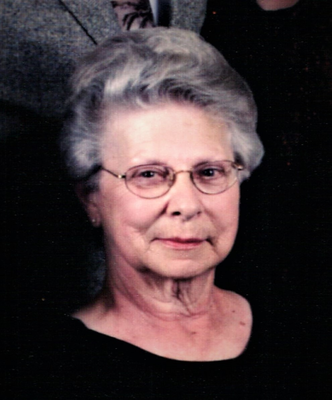 Ruth Jones, 86, passed away Jan. 21, 2018, at her home in Lee’s Summit, MO. She was born to Martha Frances and Walter A Wood on Dec. 12, 1931, in Fort Morgan, CO, and spent some of her earliest years in Nebraska before her family moved to rural Missouri.
Born the fourth of 10 siblings, Ruth is survived by her sister Clarice Burrow of Osceola, MO. They were preceded in death by Howard D. Wood, Deloris L. Bechel, Joyce I. Gow, Avis M. Tincknell, Keith L. Wood, Daryl D. Wood, Roger B. Wood and Sonja Sue Wood. At 16, Ruth graduated from high school on a Thursday and by the following Monday had moved to Kansas City. There, she lived with her father, who commuted to the city during the week for work. He’d arranged for her a job in a restaurant, Del & Jerry’s, waiting tables. Ruth liked to tell the story about the too-fresh customer who got a lap full of hot soup. One customer, however, caught her eye. Homer B. Jones had been married twice, once to a Ruth, then to a Joan. In Ruth Jo Ann Wood he found his wife for the next 42 years. He preceded her in death in 1994.

For a short time, Ruth and Homer owned and ran their own restaurant in Freeman, MO., but for 28 years, they lived in Buckner, Mo.

Her career, however, began as one of the first employees at the Western Electric manufacturing plant in Lee’s Summit. She worked at the plant for 30 years, including time in quality control. She led a self-reliant life. She was independent-minded and a voracious reader. Her tastes ran toward classical music and historical romance novels.

In marriage, Ruth had a loving relationship with Homer’s daughter, Joy, from his first marriage, and opened her home to raise Homer’s son, Robert, from his second marriage. Later, the couple took in Ruth’s niece, J.J. (Wood) Davis, and raised her as their daughter. Ruth is survived by nine grandchildren.

Ruth was athletic in her youth, playing basketball especially, and she and Homer bowled. With age, Ruth battled arthritis, though she refused to surrender to it. The family suggests, in lieu of flowers, donations in Ruth’s name to the Arthritis Foundation, 1900 W. 75th St. Suite 200, Prairie Village, KS 66208.

Ruth chose cremation and her ashes will be buried at 11 a.m., Saturday, Feb. 10, next to her husband at the Freeman Cemetery, in Freeman, Cass County, MO.