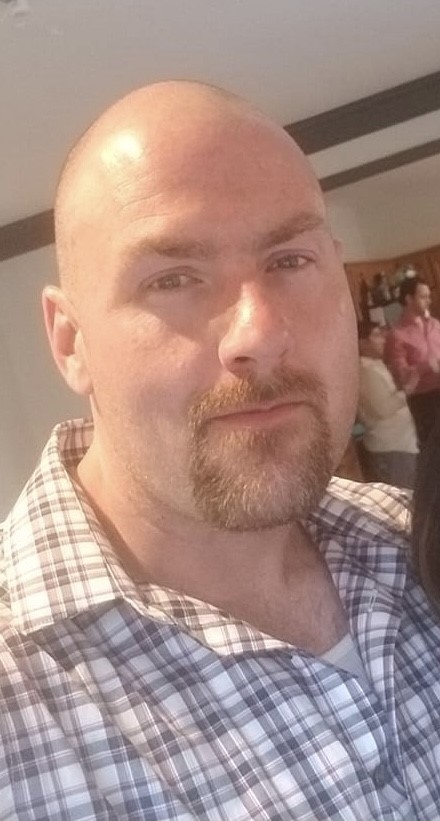 Aaron Lee Hocker passed away on November 27th, 2020 at Saint Luke’s Hospice House surrendered by his family after a courageous 1 ½ year battle with Metastatic Colon Cancer after multiple surgeries, radiation, and chemotherapy. Aaron was strong willed and always has a smile and hello for everyone he met. Aaron was born on September 14th, 1977 in Harrisonville, MO to Terry Hocker and Pamela Hocker, raised in Lee’s Summit, MO with his sister Tammy. He went to school at Pleasant Lea Elementary, Pleasant Lea Junior High, and Lee’s Summit High School where he played one year of football. He had been working at XPO Logistics Trucking Company.

Aaron’s passions were his family, traveling with his beautiful wife Mia, and watching the Chiefs and Falcons football games. He was a competitor like his father, loved being knuckled up on his computer playing games at all hours with this daughter and friends all over the U.S.

Aaron was preceded in death by his father, Terry Hocker. He is survived by his wife Mia Hocker, daughters Paige, Jocelyn, Amelia, and his granddaughter Onna. He is also survived by his mother Pamela Hocker and sister Tammy Dietrich. His Aunts, Uncles, Nieces, Nephew, and extended family all loved him dearly.

A special thank you to all his doctors, nurses, technicians and hospital staff at the Cancer Specialists both at Saint Luke’s East and Plaza locations. Saint Luke’s Hospice House in Kansas City for their compassionate care for Aaron. He is with his Dad once again under God’s watch.

RIP Aaron. He was well loved and will be dearly missed. Condolences to the Hocker and extended families.

I am so sorry for your loss. I really wanted to attend but am unable to but know my prayers and thoughts are you . He was a good man and will be missed by so many.

Wow, RIP. You were such a good, funny, kind hearted, protective human being, and I was one of many who were blessed to have been apart of your life at one point in time. Thank you for all of the laughs, and good times. I will not be able to get off work to attend your service, but my thoughts and prayers will be there. ?

I’m very sorry for Aaron to pass. He was joy to work with at Conway/XPO. He was always laughing and making all of us laugh… I also was gaming with him on Call Of Duty and still enjoyed every single game. He will missed very much. R.I.P. pain free my friend till we meet again… Much love Joe Kleynenberg

I’ve known Aaron nearly my entire life going back to Pleasant Lea. He and I were the young kids in the class with my birthday in August and his in September. He and I have always been friends. We weren’t the type that hung out a lot but I saw him about once every month or so either in a social gathering or just bumping into each other. The past 5 or 10 years we did more things including golf. Aaron could mash the ball. I’ll remember that. He was one of the most genuine and nicest people I’ve known. A few years back he texted me to come hang out and I was busy. He then tried another time and I was busy again. I wish I would’ve taken him up on those. We may have got to share more of his last few years, maybe even got back to the golf course while he was still able. I will regret that we didn’t get out as much once he got sick but we did have a good time out with friends last year while he still could. That was good. Aaron will be missed. Love ya man! Save a tee time for me in heaven when I get there.

I will miss you. I am so glad I was part of your life throughout high school. Thank you for being a father figure for me when I needed it. You will be missed dearly. ?

What I can see right now is your smile that brightened everyone’s day. You where an amazing father, friend and husband. You made sure everyone was happy around you. A memory that I have, that even paige brought up was that every time I would call you dad. You where like a father figure to me when I needed that. You’d order us pizza and rent us movies every weekend. I’ll keep all the memories in my heart. You aren’t in pain anymore, watch over all of us. We love you and miss you.

He was a great dude this is truly sad. Prayers for family and friends

Much respect and appreciation for Mr. Hocker, we will miss him at the gym. Great guy, big heart.

So incredibly shocked and do sorry for your incredible loss. I was thinking about little Jackson and how Jason loved him so. How Jason would co.e home from work and Jackson would run to his open arms. Never n a million years would I expect when I Google Pam Hocker could I prepare myself for what I saw. I am so profoundly sorry for your loss. I feel.it. To know this today…i.am heartbroken. I’m so sorry Pam.