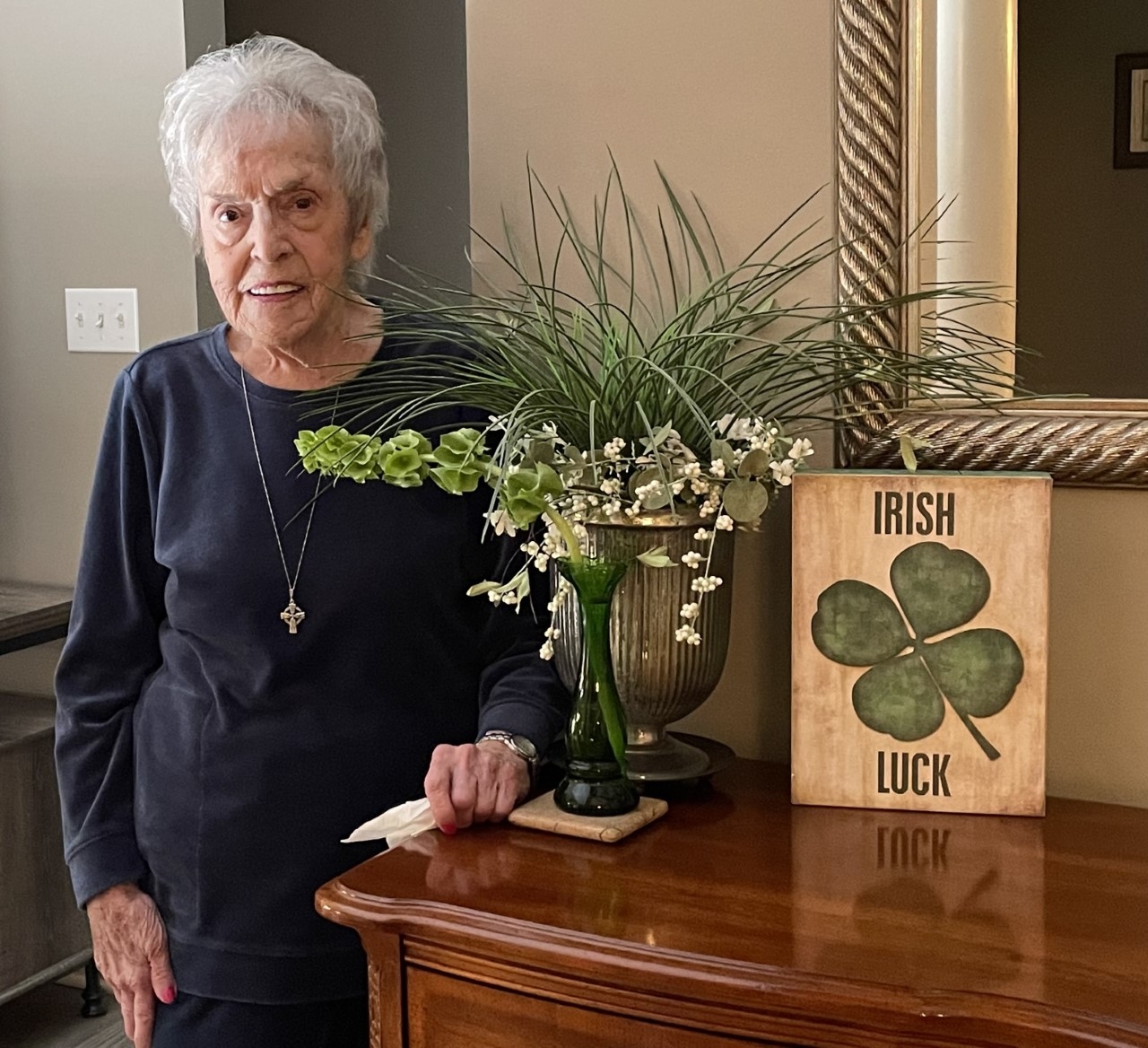 On Tuesday, November 8, 2022, Audrey Ann Ballew Collins Beasley passed away in her slumber. She was ninety-one, just short of her birthday on November 18. Born to Winona and Aubrey Ballew, Audrey graduated in 1948 from Glennon High School in Kansas City, Missouri.

Audrey married John Collins on June 18,1949 and raised 5 children. She was a participating member of the Saint Michael Archangel Church and School PTA and volunteered at the school frequently. She also worked several jobs later in life, eventually retiring to their home on the North Shore Lake of the Ozarks which is her legacy to her surviving children. She loved gardening and took pride in her small gardens at the lake. Audrey married Carl Beasley and moved to his house in Jefferson City in 2005.

Audrey is preceded in death by her two husbands, John and Carl, and two of her children, Michelle (Ronnie) and Tim (Debbie). She is survived by her eldest son, Michael (Annie), 2nd daughter, Peggy (Steve), 2nd son, Patrick (Julie), 15 grandchildren and 35 great-grandchildren. Audrey’s cremation is being handled by Langford Funeral Home in Lees Summit, Missouri and her ashes will be interned at the Lake of the Ozarks. Audrey’s children have enrolled her in the Perpetual Mass Association being offered daily by the Missionaries of the Holy Family. A private celebration of life will be held by the immediate family this month. In lieu of flowers, the family requests donations be made to the Wayside Waifs, 3901 Martha Truman Road, Kansas City, Missouri 64137 or by phone (816) 986-4401 (all donations are tax deductible).

Know our hearts break for the entire Collins family. We love you all and now she is at peace. Sending love and prayers!

Peggy and family… I’m so sorry to learn of Audrey’s passing. She was a “spunky “ lady and so full of life. You and your daughters will carry on her zest for life. I want you to know my heart breaks for you all!!! Love to all, Jane

To all of Audrey’s family and friends. My thoughts and prayers are with you at this time. Audrey and I connected when I was very young from our mutual ownership of poodles and love of animals. I will always remember her for that.

We will hold your family in our prayers and thoughts. Several times I was honored to visit with both Sally and Audrey. It brings back warm memories. I know she will be missed.
Love,
Peggy

Our deepest sympathy to all of the family! May Aunt Audrey Rest In Peace now! We love all of. You! God Bless you all

Jim & I are so sorry for your loss. Audrey lived a long life, and passed peacefully, at least. I believe she’s now with Micki and Tim in the special “pet-friendly” section of Heaven. We’ll send a donation to Wayside Waifs in her memory.

Rest in peace Audrey. I always enjoyed conversations with you. When I was 8 or 9 you taught me how to eat tacos (from the end, not from the top) and later in years we shared a shot of whisky. Prayers lifted for all of your family in knowing you now are at rest. Thank you Audrey.

Our deepest sympathy on the loss of your mother! Our prayers are with all of you at this difficult time! We love and miss all of you! God bless!

I just found out about your mom. I have so many great memories about her and your dad! Can you imagine Timmy and Mickey greeting her! There was no one like your mom, she was one of a kind! Today 1s Nov. 15th

Julie, Pat and the rest of the Collins,
We were sad to hear that Audrey passed. I sometimes enjoyed her oneriness as I’m sure many of you did. We hope you all can be at rest. She will be missed.

Audrey was a wonderful person. I used to take care of her dogs at Lake Pet Hospital, and we had some very good visits in Jefferson City . She had an interesting life, and was always full of spirit and fun to talk to. She had so much compassion for her animals, and those less fortunate. She will be missed.