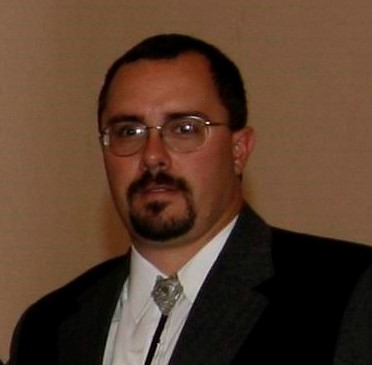 Carlos (Charlie) Esparza III (47 yrs.), of Lee’s Summit, Missouri, passed away from complications of COVID on August 18, 2021, into the loving arms of his Lord and Savior Jesus Christ. Charlie was born on March 27, 1974, to the loving home of Carlos and Dorothy Esparza Jr. in Houston, Texas. While growing up he lived in several states and countries, first was Stafford, Texas, then the family moved to Lewisville, Texas, his father’s job transferred the family to Philippines where they lived for 3 years making some very close family friends. Returning from the Philippines the family moved back to Lewisville, Texas for a short stay; then onto Monument, Colorado; next stop was Albuquerque, New Mexico where he started high school. In 1991 he moved to Lee’s Summit, Missouri, which he made his home. When people would ask Charlie “where are you from” instead for listing all those places he would say he’s a “TEXAN”.

Charlie graduated from Lee’s Summit High School in 1993. After high school he entered the ARMY/USAR, completed basic training at Fort Bragg, NC, primary specialty was power generator repair. His next duty station was Aberdeen Proving Ground in Maryland, which happened to be the same base his father was stationed at when he met Charlie’s mother. Charlie volunteered to serve in “Operation Uphold Democracy” for three months in Haiti. Charlie was awarded the National Defense Service Medal, the Army Service Ribbon, and Sharpshooters Badge. Last duty assignment was 89th Regional Support CMD FC – SPC Carlos Esparza III.

When Charlie returned from Haiti to Lee’s Summit he began working in private security while attending weekend reserve drill, once a month, until 2000. For the past 21 years he worked at Silgan Containers LLC, Grandview, MO as an AGV (Automated Guided Vehicle) operator. Over the years, Charlie has made some very close and dear friends. His hobbies were skeet shooting, target shooting, photography, fishing, and spending time with his friends in the great outdoors.

He was preceded in death by his grandparents, Carlos and Alicia Esparza Sr. and Homer and Gladys King.

He is survived by his parents, Carlos and Dorothy Ann Esparza Jr, his sisters Amy Lou Alexander and Beth Ann Hulette, brothers-in-law Matt Alexander and Patrick Hulette, nephew Dylan Reese Alexander, and his girlfriend for over 10 years, Cynthia (Cindy) Wilson.

John 3:16 For God so loved the world that He gave His only begotten Son, that whoever believes in Him should not perish but have everlasting life.

A Visitation will be at 9:00 AM, Friday, August 27, 2021 at Langsford Funeral Home, followed by a Rosary and  Prayer Service at 10:00 AM. Burial at Floral Hills East Cemetery.

Memorial contributions may be made to Mighty Oaks Foundation. It is a veteran organization that helps veterans afflicted with PTSD, by providing them peer-based discipleship on ranches across the US, at no cost to them. https://www.mightyoaksprograms.org/about

Our prayers and condolences for the family and friends of Charlie. He will be missed by all.

Dorothy, Charlie, Amy, Beth, our most sincere condolences on the the passing of Charlie. We were saddened by the news. Our thoughts and prayers for all of the family. May Charlie rest in our loving Savior’s arms. God bless you and keep every one of you.

I’m so very sorry that you have lost Charlie. My thoughts and prayers are with you always.

Howard and I are profoundly sorry at the loss of Charlie. He was a good soul and was a credit to his wonderful family. May his memory be for a blessing.

I am so sorry. My love and prayers for you. So sad such a great loss. 💘 always

I am so sorry for the loss of Carlos he was a good friend that I worked with for several years and I will miss him very deeply. May God bless all the surviving family of Carlos and gave him peace at the right hand side of God

We are so sorry for your loss. We were so sad to hear about Charlie. Our thoughts and prayers are with all of you.

I worked with “Cowboy” for the past 15 years at Silgan, we all became a family, he will definitely be missed, may your memories bring you comfort during this difficult time

Prayers for you and the family of Charlie.

Cynthia accept my condolences, my prayers are with you. Continue to live on with the good memories you had together.
May his soul rest in peace.

I am so sorry for your loss. It was an honor to have been Charlie’s wife and have him as a part of my family even though it was short. I will never forget all of the good times and always be grateful for him treating my daughters as his own. I am so glad he was blessed with Cindy as his partner in life. You will all be in our prayers.

I am so sorry for your loss. Cowboy was the coworker you could so easily call a friend, I did. He will be so missed but never forgotten. My thoughts are with you all and I pray your family feels peace and comfort in the coming days.

Our deepest condolences for you loss. Prayers and love sent your way. Charlie is an angel for your family and he will help our prayers reach you.

Matt, Amy and Dylan,
We are so very sorry for your loss in Charlie’s passing. You and your whole family are in our prayers during this difficult time. In our short time knowing you, we know Charlie was fortunate to have y’all to share his life with and vice-versa. Our “ordinary” day-to-day moments with our loved ones tend to be the most precious and the result of so much pain with their absence. We hope you are able to find some comfort remembering your moments together, and all of those ordinary moments deservingly become extraordinary.
With love and sorrow,
Tom & Cheryl, Mark & Mary Ann

I was sincerely saddened to hear of “Cowboy’s” passing. We worked together for several years and had some deeply rooted conversations that I will always remember. My thoughts and prayers go out to your family and I hope that you find solace in your many memories of him.

Dear Matt and Amy,
We are so sorry to hear of your brother’s death. It’s so heartbreaking how covid has taken so many of our loved ones.
I pray God gives you strength and support, and you are comforted with loving memories. My prayers are with you.
Maryann & Mark Westhues

My heart breaks for you. I have and will pray for the repose of his soul. May perpetual Light shine upon him and through the mercy of God, may he rest in peace.

Uncle Charlie, Aunt Dorothy, Amy and Beth Ann — we are so sorry for your loss. May Charlie’s memory be a blessing. Love your cousins in Austin, TX.

Just wanted to say sorry for your loss. He will missed very much. Thoughts and prayers to the family. He will always be with us.

My deepest condolences to Mr. & Mrs. Carlos Esparza Jr. & family. May lord Jesus Christ be with you during this time. God be with you

I didn’t find out about this soon enough to attend the services. I am so sorry to hear about Charlie’s passing! You have my deepest sympathies and we will keep you all in prayer! I hadn’t seen him in years, but I am sure he was still the same ol’ Charlie we all knew and loved. He will be sorely missed!

Condolences to the Esparza family