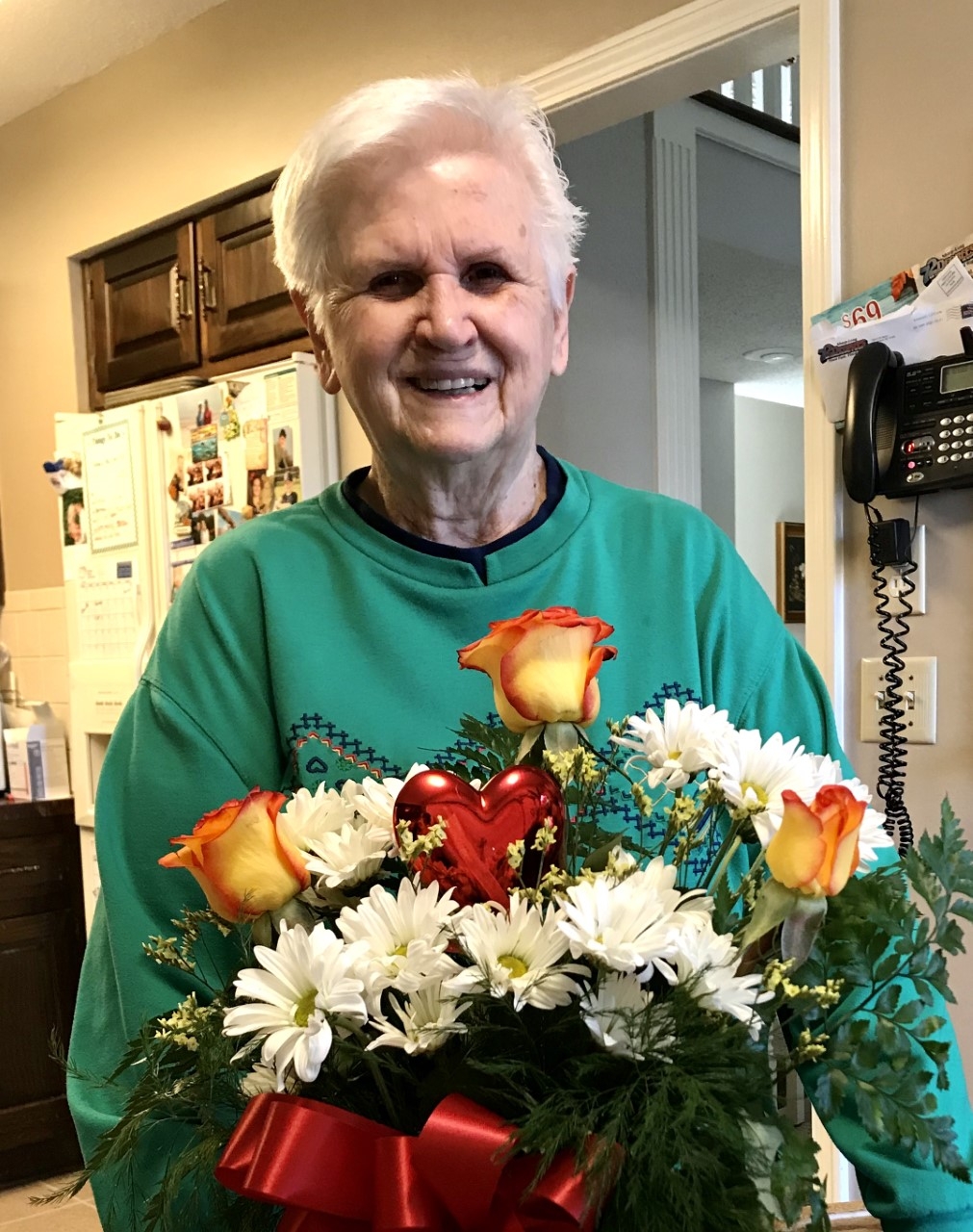 Carol Sue Schaufler passed away peacefully at home on January 26th, 2022, while surrounded by family. She was born in Lanton, MO on January 12th, 1943, to Bert and Gladys Decker and was the fourth of seven children (Betty, Bob, Pat, Frank, Donnie, and Mary Jo).

Carol’s Childhood was spent in the Lanton, MO area. At the age of sixteen, she moved to the Kansas City area following her older sisters Betty and Pat. She worked to support herself while also completing high school at William Chrisman in Independence, MO. Later that year, her High School sweetheart and love of her life, Bob Schaufler moved to Kansas City from Arkansas so they could be together. They were wed on January 30th, 1960 and remained together for 56 years until Bob passed away in 2016Bob and Carol started a family in 1961 with the arrival of the first of their three sons. After several years in Independence and Raytown Bob built their forever home at Raintree Lake in Lee’s Summit in 1975. Carol met the demands of raising three rambunctious boys who dominated her time with countless sporting, school, and church events at High Point Baptist. She also supported Bob as they worked together to launch a successful construction business.

As the kids grew older, Carol opened a new chapter by working at the Internal Revenue Service. She worked at the IRS for over 35 years receiving many achievement awards. During this time Carol enjoyed bowling, traveling, and being active at her local church.

Her retirement years were spent maintaining her many relationships and helping others. She enjoyed outings with her numerous friends, and the precious remaining time she had with her husband Bob. Volunteering to deliver and make food for the One Good Meal program also brought her great joy and satisfaction.

Carol will always be remembered as a loving wife, mother, sister, grandmother, and friend. She leaves behind beautiful memories and will be dearly missed by all.

A short graveside service is planned to be held on Monday, January 31, 2022 at 11:00 AM, at the Lees Summit Historical Cemetery for friends and family.

Mark, Brian, Robert and family, my deepest sympathies, you all are in my thoughts. Aunt Carol was was a lovely person, who will be deeply missed.

Carol was one of my first friends at the IRS. In fact, I received one of my family’s all time favorite recipes from her. I always remember her sense of humor and helpful ways at work. I know she will be missed.

Carol was a very good friend for 69 years. I will miss her. Mark, Brian and Robert my heart so out to you. Pat you also. God bless you in this time of sorrow.

We are so saddened to hear about Mrs. Schauflers’s passing. She was such a sweet soul and an amazing fellow Raintree Lake neighbor. We will treasure all of our visits and will think of her every time we look out at the sunset over the lake. In my opinion, she was the Raintree Lake Historian and will forever hold a place in our hearts. You all have our deepest sympathy, and we are here for you if you need anything at all.

Don’t worry Mrs. Schaufler, we will continue to soak up the sun and always make sure our kiddos have their life jackets on. We will make sure they get outside and fish, swim, and boat as much as they can because it goes by so fast. Your stories of watching your kids and grandkids grow up on Raintree Lake only reaffirmed our decision of raising our family on this lake as well. Thank you for being kind and making a difference in our lives.

Mark,
Sending prayers of the comfort of fond memories to you, your brothers, and all whose lives were blessed by your mother.

Though we didnt have to honor of knowing her, we know she leaves a beautiful legacy behind in you and your family!

Mark,
Sending you and the family my condolences and prayers as you go thru this difficult time. She sounded like a wonderful person.

Such a fine lady..hadn’t seen her in several years but she made a lasting impression on me. Rest in divine peace sweet lady!

Robert and Lesley, thinking of you at this difficult time. I met Carol once at your Christmas party years ago and unfortunatley we didnt have a chance to visit much. Her obituary shows that she had much determination and led a very full and active life. Sadly, the world is never the same without our parents in it.

Mark and Family,
In reading your mom’s obituary one can see that your Mom was a wonderful mother, friend and neighbor, who raised a outstanding family. It made my heart happy that when I ready that your parents built their forever home at Raintree Lake. You have to live there to fully appreciate its beauty.

While I never had the privilege of meeting your Mom, it always made me smile when she would “like” our posts on the City’s Facebook page when the post was about Water Utilities. Always supporting her son! We will miss her “likes.”

So sorry for your loss.

Mark, Brian and Robert and families. You may not remember me, but your Mother was always so precious. I remember you boys growing up, seems like a lifetime ago. Your Mother always had the best stories and she was so very proud of you all. My sincere condolences to you and your families I know you will miss her terribly. Years ago, we were in in Canada fishing, your Dad used to make fun of the way i baited the hook. Uncle Bob and Aunt Carol were quite the pair, may you find peace and comfort knowing they are together again.
Marsha Redman

🙏🏼Prayers for all of the families

Heaven gained a great soul. I grew up with Carol living next door to me at Raintree Lake. Great memories with all her boys and her husband Bob. After going out into the world, I came back to Lee’s Summit and became her next door neighbor again. Best neighbor ever!!! She was always lovely to me and my family. Always a smile and a wave. We will miss her joyous spirit being in this world. God Bless!