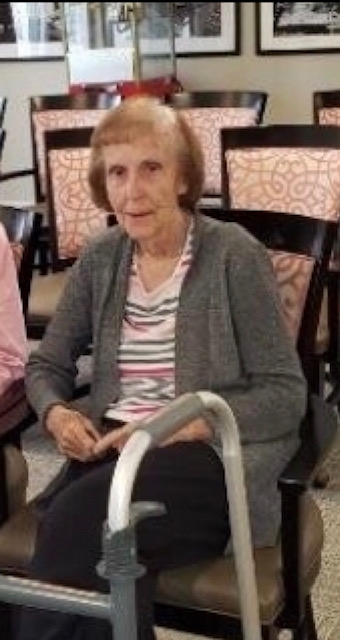 Catherine Patricia (Pat) Smith, Age 85,  passed away on Wednesday April 6th 2022 at Cross Creek Memory Care, Lees Summit, Missouri.    A private funeral service will be held at Langsford Funeral Home followed by burial at Floral Hills East.   A visitation/celebration of life will be held at Harold and Pats home on Tuesday April 12th, 2022  from 4-7  pm for friends and family.

Pat was preceded in death by her parents, her Sisters,  Frances LaBar of Gladstone, and Merta Powers of Gladstone, Missouri  and her brother John Perkins of Flushing Michigan.

Pat was born in Linneus, MO to R.C and Maxine Perkins.  She graduated from Brookfield Highschool,  class of 1955.   Pat was a graduate of Central Missouri State University and earned a Masters of Arts Degree in Education from the University of Missouri Kansas City.   She was a teacher in the Raytown School District and taught third grade at Chapel Elementary School and was a Special Reading Teacher at Raytown Middle School.

Upon her retirement from teaching, her second career was as a real estate agent with Reece and Nichols.

Pat was a member of Woods Chapel United Methodist Church and a long time member of Beta Sigma Phi Sorority.

In leu of flowers, the family suggest donations to the Alzheimer’s Association or to Wayside Waifs of Kansas City.

Harold & Family,
My thoughts and prayers with you! Hope you can put the last few years in back of memories and think of the good good times.
Sharen

She was a gift from God. I loved her❣️

Smith Family
Pat was my kids 2nd “soccer grandmother” and J’s 1st Real estate agent. You could always count on her to have a smile and a kind word.

A mother’s love is alive forever. In the lessons she taught, the patience she gave, and in the hearts of the children she raised. Our prayers go out to you in this time of great sadness

Harold, Steve, Debbie, Jim and all the kids – I was so sad to see that Pat had passed. What a beautiful woman, wife, teacher and mother she was. I have countless memories of having fun with all of you and learning so much from Pat. She was a wonderful mentor to my real estate career and a lovely friend. I hope you all take comfort that we will see all of our loved ones again in heaven someday. Miss ALL of you. My prayers are going up for the whole family in this time of grief. I know you are all carrying on her traditions in loving memory of her. – Margo