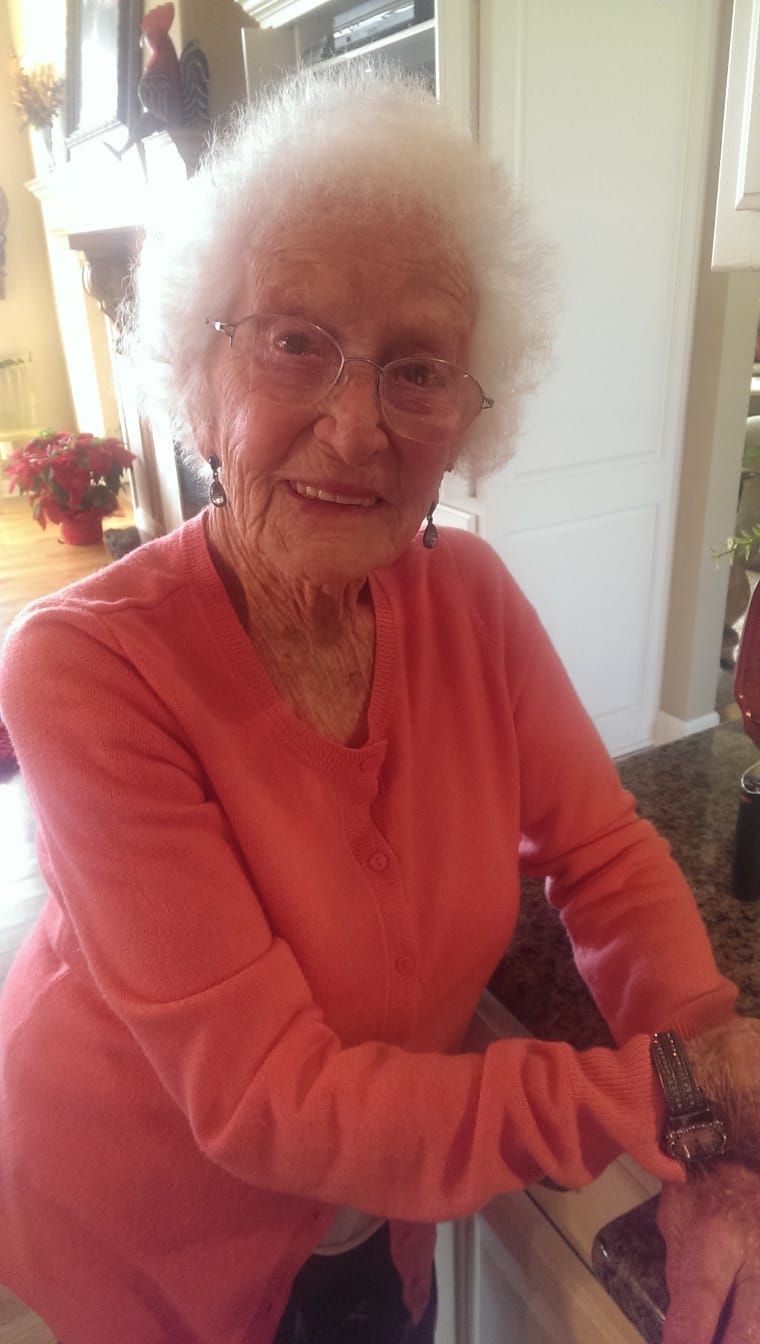 Celeste was born Sept 10, 1919 in Fair Haven, Massachusetts.  She was raised in New Bedford, Massachusetts.  She spent much of her youth as a mermaid.  Her first language was French, she learned English at the age of 16.  She joined the Women’s Army Air Corps and served as a P-38 airplane mechanic during World World II.   After discharge, she worked as a hair stylist and Minnechaug High School librarian.  She moved to Lee’s Summit in 1996.  She was an avid golfer, gardener and bridge player.  She loved jewelry, muffins and a party.

She was preceded in death by her husband, William Sullivan, Jr., identical twin sister Stella Rainville and sister Mabel Sutcliff.

Dear Celeste, I have so many great memories of staying at your house with Colleen. You always treated Charly & I like a part of the family. I know you are in a wonderful place now, but you will be missed greatly.

Colleen, I know it is never easy to lose a parent. My thoughts and prayers are with you my dearest friend. Love you. Jan

Always loved being in the presence of Celeste. She was the “Energizer Bunny” and would point out things in life that you may have missed. Doug and I wish we could be in KC and Wilbraham to celebrate this incredible woman. Love to all the Sullivan-Russo family.

We are so sorry for the loss of Celeste. She will be greatly missed. We remember times with Celeste that included soft serve ice cream- the best ice cream in Lee’s Summit Missouri. We also enjoyed Celeste sharing her past life experiences from when she was a little girl up to the time that she served in the Army and married her wonderful husband.
A very sweet, vivacious lady who will surely be missed.
Love,
George & Clare

I met Grandma Celeste for the first time in 2011. She was the nicest person I have ever met on her 90ties! Always well dressed with bracelets and collars! So happy to have the chance to know her!
Now she has gone but will be forever in my heart and my mind, as a happy person!
I wish her soul all the peace and I know she will be taking care of her beloved family from high above.
Love always
Cris

I was lucky to meet grandma celeste in the year of 2009, during which I lived with the Russos for a semester due to an youth exchange program.
I loved to hear the stories of her childhood and of her time in the army, and she never gave up at trying to teach me how to golf – even though I was terrible at it. When I developed an addiction for nutella, and was prohibitted from eating it, grandma celest would always smuggle me extra jars. Cannot put in words how lucky i fell for having the chance of being with her for 6months. Love you grandma.

I’m so sorry to hear about grandma Celeste’s passing. I was fortunate enough to meet her several times throughout college and she was always kind, funny, and welcoming (if memory serves, she even tried to help me improve my golf swing!). I’m glad I got the chance to know her and I’m sorry she’s gone.

All my love and sympathy,
Jim