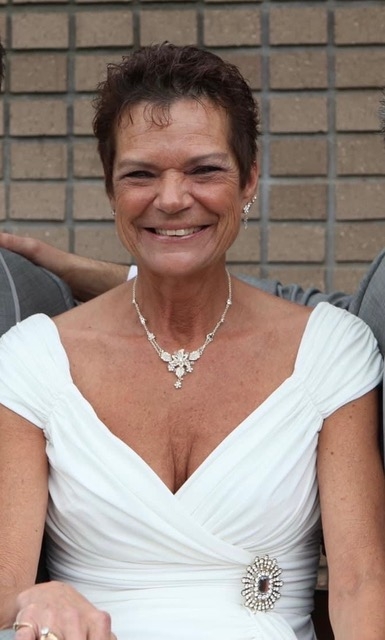 Christine Kay Ferguson, 66 years of age, took the hand of Jesus and walked with Him into Heaven at 6:19am Sunday morning, August 7, at Lees Summit Medical Center after a lengthy and hard-fought battle with bladder cancer.

Chris was born in Fairfax, Missouri, on January 15, 1956, one year after the birth of her husband Richard, who was born in the same hospital, by the same doctor, and in the same month. Chris was the youngest of four children born to Bernie and Avon Coffman.

Chris graduated from South Holt High School, Oregon, Missouri, in 1974 and then graduated in 1978 from William Jewell College, Liberty, Missouri, with a BS in Nursing. After a nursing career spanning 43 years and including hospital nursing, school nursing, the Platte County Health Department and the Johnson County Health Department, Chris retired on January 14, 2021 from the Women’s Clinic Of Johnson County, Kansas. During her career, Chris was the School Nurse at West Platte High School, Weston, Missouri, for seven years and her three children attended the same school during that time and had the comfort of knowing that she was there any time they felt they needed to reach out to her.

Chris absolutely loved being a band wife, sitting in on rehearsals, recording sessions, and traveling to performances with the band.

Chris was preceded in death by her parents Avon and Bernie Coffman, her brother, Mark Coffman, and her in-laws Merrill and Berniece Ferguson, and a niece Angela Coffman.

Chris’s light, her inward and outward beauty, her smile, her spirit and the very essence of her will live on and on deep within the hearts of her husband, her children, her grandchildren and everyone she touched and tried to help during her medical career. She lives on in love.

A second Celebration will be held in Chris’s hometown of Oregon, MO at Noon on Monday, August 22, at First Christian Church, 204 South Washington Street, Oregon, MO, 64473.

Instead of flowers, the family encourages everyone to contribute to their local blood centers and blood banks. It became very clear during Chris’s battle that blood is apparently in dangerously short supply.

It is way past time for there to be a cure for cancer. Speak out! Loudly! Demand a cure now!

My Deepest Heartfelt Stmpathy to Rich, and the entire Ferguson Family at this most Difficult Time! Chris will be missed by you all, but she will live on in your Hearts and Her Memories are Cherished Forever! God Bless You All!

Rich, I am so sorry for your loss!

Many Prayers for the Family. What great neighbors they were when they lived in Weston. The Lott Family

She was such a great coworker and friend ! I will truly miss the last years we were texting 2-3 times a week about all the things in life and of course The Chiefs and The Royals !!! She was a great friend and loved her so ! Always made me laugh ! I will keep Rich and the family in my thoughts and prayers !!! ❤️❤️❤️

Love and peace to your family. Chris was a sweet person, fun, smart, loving-all the good stuff.

Prayers to Rich, and family. Chris was a wonderful lady, strong spirit with a generous and loving heart. Her smile warmed every soul she touch. She is very much missed by everyone. 🙏🙏🙏❤️

Chris was a childhood friend and I have always cherished our times together. I remember visiting her sister in St. Joe with Chris when we were just in elementary school — we traveled in the back seat of her parents’ car with automatic windows when that was first in place. We played in her parents’ basement and pretended lots of stuff. I always admired her and knew that she was living the life that she always dreamed. I just regret that we did not keep in touch as adults. I am so saddened that she is gone but know that she had a wonderful life, especially her years with Richard and raising their family. She will be remembered by all the lives she touched and thank you for giving her the permission to meet Jesus and start her new life in heaven — I am positive that she will be waiting for her family to join her when the time has come. Please know that the Oregon community is not just those who live there presently, but for all of us who grew up there and had the opportunity to know and love the its people. Please accept my condolences and remember that whatever you need, just ask. Wishing you peace and comfort and a great big hug!

So very sorry, my friend. Holding you and your family in prayer.

You and your family are in my Prayers!

There are no words to express how sorry I feel for your loss.
Prayers for comfort.

Our deepest condolences to Rich and family. May God give you peace in this difficult time. You and your family are in our thoughts and prayers.
Bless her soul!!!
Susie & Darrell Robinson

I was so saddened to hear about Chris. I wasn’t aware she was sick. My condolences to all the family. God Bless all of you.

Rich, you won’t remember me, but I’m Harry Williams’ niece. I’ve kept in touch with Judy and Kay. Judy had told me about Chris’s cancer and asked for prayers. Chris has been on my prayer list ever since. I’m so sorry to hear of her death, and prayers continue for you and your family for strength to carry on. It will be difficult, but you have a very strong family support system and a strong faith.

Sending prayers to Chris’s family. I am so sad to hear of her passing, praying for peace and comfort for her family. She had the most beautiful smile! Blessings to all, Ann Kunkel

I have countless memories at the Ferguson household growing up! Mrs. Ferguson was always so kind and fun! She will be truly missed. My thoughts and prayers go out to your family during these difficult days. Sending lots of hugs your way.

We are so saddened to hear of Chris’s passing. We were next door neighbors in Warrensburg, our children were friends and we enjoyed being neighbors. Our love and prayers go out to all of you at this time. God bless you all🌹
Love,
Mary & Sonny Castro
Marco, Becca and Katie

I worked at the health department with Chris and we were all devastated when she left for another job. She was one of the smartest nurses I had ever worked with and by far the most fun! Chris cared for people and she was a great friend! I always knew how much she loved her family and how proud she was of them. I am so sorry for your loss, but heaven has gained a beautiful angel!

my. Condolences to the family, Praying for your Strength and comfort during this difficult time knowing God will give you peace and the great memories of your love one lives on within you.God Bless.

There are no words I can say to help you all in your grief. I think you said it best about her essence living on and touching us all. I can only hope to be half the mother and grandmother that she was. I have always been so impressed by her strong love for her family. She will now be your gradian angel. I’m sure God needed her more than we did. She will be helping him heal those that are not done here in earth. I love you all, God Bless!