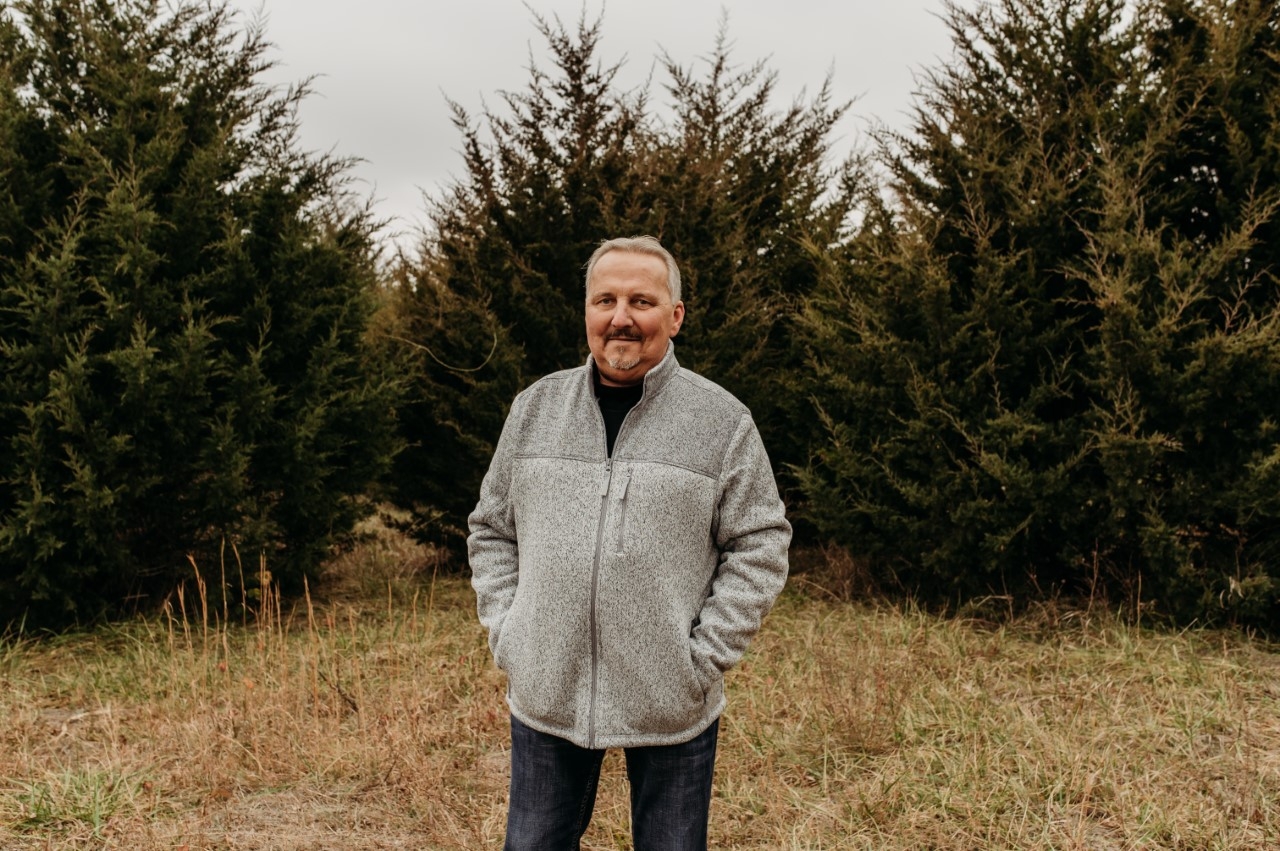 Daniel (Dan) James Swope, the ultimate King of dad jokes, left his earthly body while surrounded by his family on a beautiful sunny Friday, March 25, 2022, from his home in Lakewood to meet his creator in Heaven. His spirit is carried on by his parents Bill and June Swope; children Kyle Swope, Nick Swope, Allix (Ryan) Nachbar and Daniel Swope; grandchildren Cameron, Avery, Dylan, Kinley, Preston, Hudson, Holland and Harrison; siblings Dianne (Dave) Studer, Sue (Mike) McCambridge, Julie (JJ) O’Gara, Steve (Rita) Swope and an extended family of relations and friends from every walk of life. He is preceded in death by his grandparents John and Martha Rupprecht, Dewy and Mary Swope and Irene Case. He was truly a hero and the world was a better place for the last 63 years because he was a part of it.Dan was devoted to his faith, his family and his career. St Margaret of Scotland Catholic Church in Lees Summit was the parish he regularly attended and cantered for. He could always be heard singing at mass even towards the end of his life. He believed in working hard by literally lighting up Kansas City to provide not just for his family but for all people in need. He was patient, humble and kind. He loved and respected a stranger, just as he did a friend and he was a giver. It didn’t take a special occasion or holiday for him to be generous. Dan gave whenever the opportunity was available whether it be a generous tip, a charitable donation or a crisp one-hundred-dollar bill to his grandkids. He easily connected with people and showed up to every event, no matter how big or how small, to show how much he cared. He appreciated people for who they were and where they were in their lives and generally kept his thoughts and opinions private. He had a natural way of making people smile with his charming compliments and dry humor and his laugh was contagious.He genuinely just loved peace and quiet. A lunch at Houlihans with only a few words, a relaxing car ride listening to his smooth jazz music or an early morning cruise on the boat when the lake was like glass were some of his favorite moments. He was a sucker for presents overflowing from under a Christmas tree and felt pure joy watching his grandchildren open the “big gifts” from Papa. He hated to miss a baseball game at Kauffman or a football game at Arrowhead with his family. The look of pure joy on his face when the Chiefs or Royals pulled off a championship win is something that cannot be replicated. The 4th of July tents were a big fan of his as there was no such thing as too many fireworks, and the M80s… you didn’t truly experience life with Dan if you didn’t jump out of your skin to the sound of an M80. He loved to travel, especially to Mexico, and felt like his best self when he was on the beach or soaking up the sun poolside. He loved a perfectly grilled steak, hated mashed potatoes, and a cold glass of Crown Royal was his absolute favorite drink of choice. He was a fan of Pink Floyd and Marilyn Monroe; he could twirl anyone around a dance floor and enjoyed a good concert. He gave the best advice and was all around known as a “great guy”.Most importantly was his love for the Lord. His pain and suffering during his long heroic fight against cancer brought him closer to Jesus. He regularly thanked God for the small things in life (like a green light when he was running a little late to a meeting) and never wavered or questioned God’s plan for him as he navigated through the trials and tribulations life handed him. His Catholic faith was his firm foundation and he proudly passed that down to his children.Services will be held at St Margaret of Scotland Catholic Church, 777 NE Blackwell Rd Lees Summit, MO 64086 on Wednesday April 6, 2022. The visitation will begin at 9 o’clock in the morning and immediately followed by the funeral mass at 11 o’clock.

In lieu of flowers, memorial contributions may be made to the Stephanie Vest Foundation at https://www.stephanievest.com or to St. Jude’s Children’s Research Hospital

Mass won’t be the same without your presence

I spent 10 years competing against Dan in the lighting industry. He was a tough competitor that kept me working hard every day. It wasn’t until I changed jobs and become one of his clients that I got to better know Dan. Expecting not to be given the time of day, Dan welcomed the opportunity not only to do business together but learn from each other experiences and connect on a personal level. I truly regret that I didn’t get to chance to know him earlier, I’d like to think we’d be pretty good friends. Godspeed.

I work for Pro Electric and was introduced to Dan in/around 2004. He always had the kindest words to say and always made a point to stop and say hello when he came to visit the guys in the office. He always attended our Holiday events, as well as any other events we hosted, he treated us like we were his employees, always giving.
He is never going to be forgotten in my heart,
HE IS THE FIGHTER OF THE FIGHT!!!

Words can’t express the sorrow I feel for all of us who loved him. He was a true blessing to me
He was so supportive and helpful and I knew he was always there for me!

I am so sorry for your loss. Dan was a wonderful man and very devoted Catholic. Please know you are all in my thought and prayer.

What a wonderful obituary! My prayers are with Dan’s family and friends as we all mourn his passing…I say with great confidence that we can rest assured knowing that Dan is with our Lord and Savior.

I’ve known Dan since the late 70’s, he a delivery driver for EMCO and me with my fledgling electrical company. Friends to the end, we did a ton of work together, seen a lot of changes together.I will miss my old friend.

While we met through work, I’ve had the pleasure of becoming Dan’s friend over the past 15 years. I feel truly blessed to have known him and have so many fond memories of our times together. Sending prayers on behalf of the entire Barron Lighting Group family. We will miss Dan so, so much, but know that he is finally resting in peace.

Too many good things to say. He was a good boss and friend.

Great memories at the Jason Mraz “Love Tour” last year with you and Kary, fitting. And every time we went to Houlihan’s I would always look for you. But finally, His Love and His Spirit has carried you home.

You will be missed by all who loves you.

Dan was a wonderful friend and generous supporter of our band of baseball players. His patience, insight and love will be dearly missed. His warm smile will always stay in our hearts.

Dan will be missed by all who knew him. He and I worked together for 30 plus years at Westhues Electric. I always looked forward to seeing Dan when he dropped by the office. Dan was upbeat and always had a smile on his face. We would tell each other stories, jokes, laugh and of course a little bit of work! Dan was a wonderful
person and would give you the shirt off his own back. I would like to offer my condolences to all his family and to all that loved Dan.
I am living in Arizona and will not be able to attend his services.
I am praying for Dan and all who loved him.

Going to miss you big time Dan . Rest In Peace and we will meet again !

What an obituary. Really sums up how I remember Dan. I always ran into him at Houlihan’s or Lakewood Local and always had to fight him so he wouldn’t always pay my bill. I only wish I would have known him longer than I had. He truly left a lasting impression on me as a great, caring man. He will be missed!

We, at Citadel Electric, are all saddened to hear of Dan’s passing. We will all miss him greatly. What a wonderful man Dan was! He was always positive and smiling, no matter what life threw at him. What an inspiration he was, with his fight against cancer and health issues, he always came into our office with his head held high and smiling. We send our condolences to your family, and you will be in our thoughts and our prayers through this difficult time.
Citadel has made a donation in Dan’s memory to the Stephanie Vest Foundation.

There is no one quite like Dan. I will always remember him. He created and reinforced the fact that whatever I needed genuinely mattered; no matter the topic or reason for my call. I consider him a great teacher and better listener. I cannot find words to express my gratitude for the time I enjoyed with Dan.

Dan was a pleasure to work with . Great man.

Our Thoughts and prayers are with Dan’s Family, Friends and Business Associates