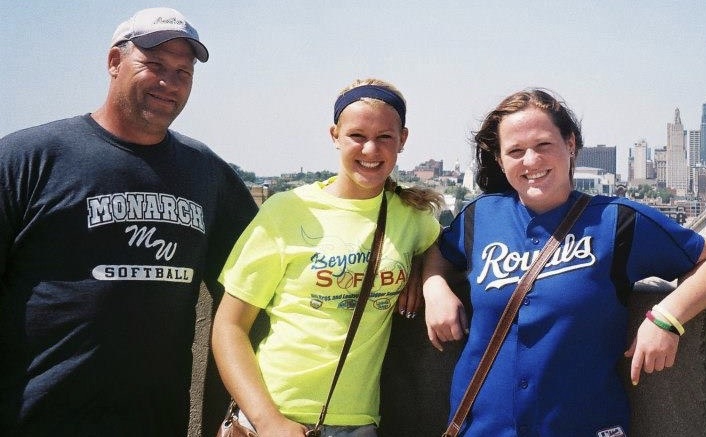 David Patrick Backhus, 52, passed away Sunday, April 21st, 2019 after a brave battle with
cancer. David graduated from Lathrop High School in 1985, where he was a star football and
baseball player. He was also known for “tearing up the town.” David joined the Navy in 1985
and served until 1992. The last fifteen years he was employed by the Lee’s Summit R-7 School
District.
David was an avid hunter, fisherman and outdoorsman. He was passionate about coaching both
of his daughters in softball throughout their school years. David was an honest, loyal, hardworking man who would drop everything to help a friend or neighbor in need. People were
drawn to, and knew him for, his work ethic, sincerity, kindness, helpfulness towards everyone,
zest for life, endearing nature, and great sense of humor. He always had a smile on his face and a
hearty greeting for everyone he came across. David was truly one of a kind and a blessing for
those who knew him.
David was preceded in death by his brother, Danny Backhus, his parents, Alfred and Mary
Backhus, and his first wife, Lucinda Backhus.
He is survived by his loving wife, Viki Backhus, daughters Jessica Backhus and Samantha
Backhus, stepchildren Jeffrey Bredemeier (Ashley), Angela Teghtmeyer (Eric), Aubree Perry
(Nathan), Alyse Talbot (Ian) and grandchildren, Jordan, Jeremiah, Sullivan, Ainsley, Victoria,
Macree and Scarlett. Survivors also include David’s sisters Theresa Wren (Donald) and Rosanna
Ristau (Dave), numerous nieces, nephews, extended family and dear friends.
Visitation services will be held on Saturday, April 27th, 2019 from 3:00pm-5:00pm at Langsford
Funeral Home, 115 SW 3rd Street, Lee’s Summit. A short service will be held immediately
following the visitation. In leu of flowers, the family asks for donations to be made to Wayside
Waifs and/or Kansas City Hospice.

RIP my friend. Your smile and laughter will be truly missed.
Prayers to the family.

You will be missed but not forgotten. We made some good memories and it was my honor to have known you and your family.

Vickie I am so sorry to read this. My prayers and thoughts are with you and your family at thus time.

Dave you were a great friend and father. It was my honor to have known you. Thank you for the memories. I know you will be missed but not forgotten.

A truly great person, always had time to talk a second or lend a hand. Will be dearly missed.

Viki,
So sorry to hear about David’s passing. Our hearts and prayers are with you and your family.
Love,
Susan and Tim Mccracken

I worked with Dave for several years at the school district and all the good words about him are true. You could never meet a nicer guy.
Rest In Peace, Dave.

My condolences go out to all the Backhus family for losing someone close to them. It seems much too soon, but our Lord calls us at the time He believes is right. You are in my prayers.

I am so sorry for your loss. A life gone way too soon. I am grateful Harrison got to meet his Uncle David! My thought and prayers are with this special family during this most difficult time.

Viki so sorry for your loss. My prayers for you and your family. May Jesus loving arms surround you and hold you during this difficult time!

Sammi Backhus: Coach Jeff here from the Originals ‘95 here. Along with Coach Eric and our entire Originals ‘95/j2 Families, we send you our sincere sympathies and pray for God’s comfort to your.family. Your dad was the consummate “Character”…The one that anyone would be drawn to. We will miss him, and be thinking of you. He loved watching/coaching all kids and that makes him very special. I will always remember his bellowing voice during a Lesli Watkins grand-slam at Nationals in 2014…”Get Outta Here!…Get Outta Here!….Yeaaaaa! Yeaaaa!” A “Character” that I will always wish that we’d have had around longer, but sincerely grateful for the time that you all were part of our O’s ‘95 family. Sammi: We Love You. we Loved Your Dad. And, You are in our O’s Family Team Prayers Today.

Coach Dave always brought a smile to my face. He spent so much extra time working with me when I was struggling with my batting stance or my messed up throws. I always appreciated his patience and kindness. Thinking of all of you today. Much love to you, Shorty!

Dear Viki and family, we were so blessed to meet you both at the cancer clinic in Reno Roger and I are very sad for your loss of David who seem to be a truly incredible and loving partner May peace be with you and your family in this most difficult time Viki May you know that you did everything possible to help him in the journey before God called him home Sending you much love from Las Vegas and continued prayers for you and your family