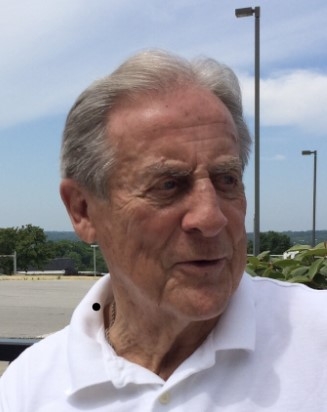 Don was born on September 17, 1929 in Lawton, OK, to Jesse (Smith) and Lon Froneberger. He spent his childhood in Oklahoma City and later served in the US Army in the 101st Airborne during the Korean War. He attended the University of Oklahoma, graduated with a Bachelor of Arts. He married Loa-Le Foster in 1953 and they moved to Kansas City for employment with Hallmark Cards. Don then went on to a successful career with the Roy Printing Co. eventually rising to Vice President.

He and Loa-Le raise their five children in Fairway, KS, until 1989. After retiring, they spent time RV’ing with their children, grandchildren and great grandchildren. They especially enjoyed the Northwest and spent many years on Whidbey Island before coming back to settle in Lee’s Summit, MO, near family.

Don enjoyed being active well into his 80’s, playing racquetball, exercising, and working in his yard. He also liked to “get together” frequently with family or friends for coffee and conversation. He was very much loved and will be dearly missed.

Don was preceded in death by his wife, Loa-Lee, his parents, and his three sisters. He is survived by his five children: Mark, Greta, Lori, Kristl, and Kurt; eight grandchildren; and fifteen great grand-children.

Per Dons wishes, he was Cremated and there is no services scheduled at this time.

To Don’s kids,
Kathy and I wish to celebrate the long life of your Dad. We were your neighbors next door on Mission Road from Oct. 1979 to when you left. We are still living in the same house. We remember the day your Mom and Dad decided to purchase an RV and start a new adventure. Mark, you built the railing around our upstairs deck. tt lasted for sometime but eventually I had to replace it. Your Dad was my little League Baseball coach.
If any of you wish to revisit your childhood feel free to stop over. We know the owner of your old home very well and I am certain she would not mind a visit.
Not surprised your Dad had a very long healthy life as he always kept himself in great shape. Kathy and I offer our sympathies for the loss of both your Mom and Dad.
Kirkland and Kathy Gates

I will always be grateful for the positive influence Don was in my life.