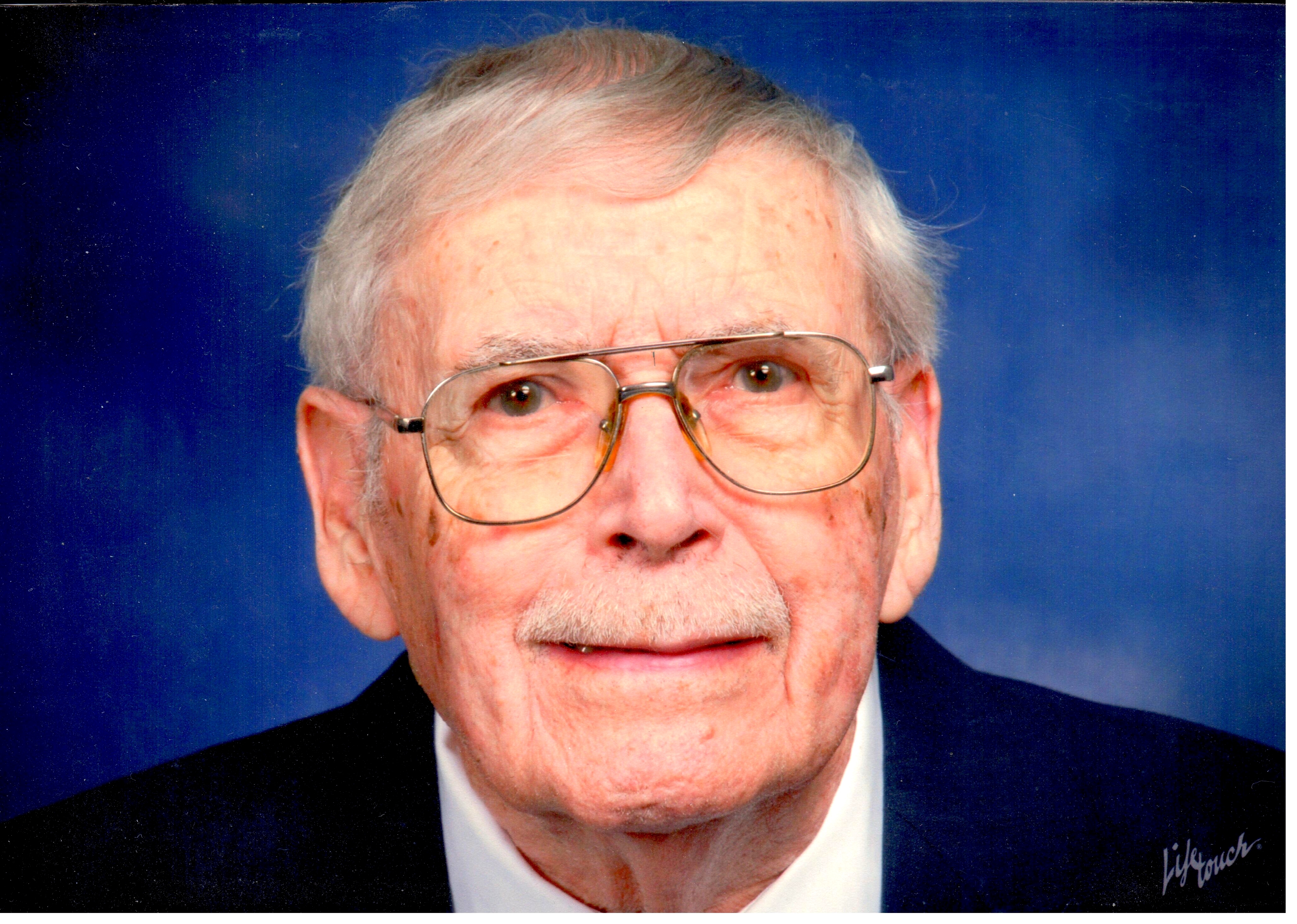 Donald Lewis Raymond, 94, passed away peacefully with family by his side at his home in Lee’s Summit, Missouri on April 10, 2020. The family is having a private burial at the Lee’s Summit Cemetery. There will be a memorial service at a later date.

Don was born in Blue Springs, Missouri on April 13, 1925 to Louis and Lena Lee “Daisy” (Cole) Raymond. Don was raised on a farm just outside Lee’s Summit. He grew up happy as an only child, helping his dad on the farm while learning to trap and hunt at only eight or nine years old. His early years helped solidify his love for nature and science which he would go on to build his life’s career in as a professor of Geology while also creating his own small business, Earth Science Educator’s Supply.

Don is preceded in death by the love of his life, Jacqueline (Buchanan) Raymond. Don and Jackie were married on August 4, 1944 shortly before he shipped out for his service with the United States Army in the Pacific during World War II. Before Don left, Jackie gave him a pure silver dollar that her father had given her with her birth year on it. Don carried that coin in his pocket all through WWII and every day of his life until the very end. The coin was rubbed completely smooth on both sides but remained a true token of their love that would see 70 beautiful years of marriage and five loving children.

Don wore many hats in his lif: son, husband, soldier, student, father, teacher, grandfather, but mostly Christian. As a young boy he had dreams of being a preacher and although life took him in a different direction, he never wavered in his faith. Don was a proud Christian man that truly loved his church, the First Baptist Church of Lee’s Summit. He attended every Sunday until he was unable.

Donald Lewis Raymond was a brilliant man full of love, stories, and some of the most fantastic ideas. He will be deeply missed and always deeply loved.

“And ye now therefore have sorrow: but I will see you again, and your heart shall rejoice, and your joy no man taketh from you.”

So sorry to hear about your dad. May the happy memories give you peace.

Doug and Diana I am so sorry for your loss. My thoughts and prayers are with you and your family.

So sorry to hear of his passing. One of my favorite teachers. I enjoyed visiting with him at our 50th reunion. Prayers for his family

Losing a parent is so tough. Even when losing him seems more of a blessing. Our prayers will be with you & your family during this time of sorrow. Looking forward to seeing you both at his memorial.

I first met Don in our Sunday School class at FBCLS when two of the men’s classes merged a few years ago. I remember one day when we were talking about the needs of the poor and Don shared that he contributed regularly to one of the city missions in KC. MO. I was impressed with his commitment to caring. I also remember when Don shared with the class about his diagnosis and he asked that we pray for him. That, he said, was what he was depending on. Don continued to attend class until his health made it impossible to do so. I think the last time I saw him was at church at a Christmas candlelight service. I called him a couple of times after he was no longer able to attend our class. His voice was always warm and kind. Don blessed my life. I look forward to seeing him again in heaven some day. My prayers go out to you as a family in your loss.

It was my good fortunate to be Don’s Sunday School teacher for the last several years. He showed his love for the Lord in thought and action. His thoughtful questions and contributions to our class added to our understanding of each lesson we considered. He will be missed. Our thoughts and prayers are with you.

I am a member of is Sunday School. Don will be missed.

Jon, im so very sorry for the loss of your Dad,you have my deepest condolences.

Sorry for your families loss. Sounds like he was a great man!

We offer our condolences for your loss. Our prayers are with you during this time of grief.

Gods blessings to your family. May the light that was lit by Donald by the way he loved his Savior Jesus Christ continue to shine in all his family. I pray that each family member will search the scriptures and learn the happiness and salvation that their beloved Dad, and Grandfather would want them to know and so he can see each of you again when you join him in heaven. There is sorrow when our loved one leaves this earth, but joy to know you can see him again. Our love to you.

Don, you will be greatly missed at First Baptist Church, Lee’s Summit, and especially in
the Adult Men’s Bible Class taught by Bob Rethemeyer. Your presence was always a
blessing, and your participation in the class discussions added greatly to the many lessons. Our prayer is that God will richly bless you in your heavenly home and your presence will be a shining light for all eternity.

Our prayers are with your family as they continue life’s journey with their remembrance of your Christian love.

A beautiful tribute to a man who raised a Christian, loving family. My prayers are for all of you at this time and in the weeks and months ahead. I know these last few months have been hard but I’m sure Don appreciated having you there to care for him. I love the story of the silver dollar. He could not have shown his love for Jackie in any better way.

We have so many wonderful memories of Don and you, his family.
Memories from church, memories from working together in the Lee’s Summit School District, memories from commuting to summer graduate classes. I learned more from our conversations driving to and from UMKC than I learned in the classrooms! We are thankful for knowing the Raymond family and thinking of you at this time of loss.
Sincerely,
Roy & Martha Fortner

Mr. Raymond has been very special to me ever since I met him at ESE (Earth Science Educators). He had just come back from a rock collecting expedition, bringing back rocks and minerals to supply students throughout the country. He was sitting out front with a rock hammer in hand, breaking up massive rocks into student-sized samples. He loved to tell stories and was always very kind to my daughters, picking out beautiful samples of pyrite and galena for them. Mr. Raymond will be missed.