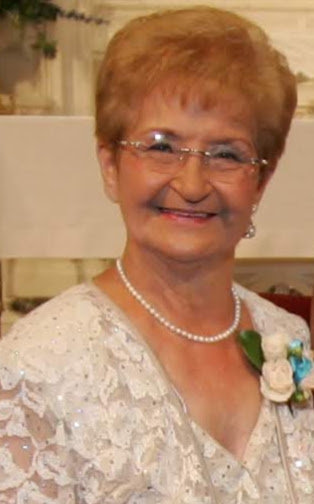 In 1942, her mother Grace passed away when Dorothy was eleven years old. Subsequently, Dorothy, her sister Alice and brother Elmer helped care for their younger brother Roy, from his age of five.

Dorothy had a beautiful soprano voice, singing as a soloist in high school, receiving several #1 ratings at district and state vocal competitions. She served as a member and soloist with the United Methodist Church adult choir, and sang at Christmas time with the Messiah Chorus, established by the Reorganized Church of Jesus Christ of the Latter Day Saints at the RLDS Auditorium in Independence, MO.

Dorothy met Donald Ray Purtle in 1946 when they both attended High School in Lee’s Summit. Don’s family soon moved to Longview Farm, causing Don to transfer to Grandview High School. They persevered, and were married September 3, 1949. This September would have marked their 72nd Wedding Anniversary.

Don joined the Navy in 1951, initiating adventures for them both in the Territory of Hawaii. On April 5, 1954, their first son Jack Thomas was born at Tripler Hospital in Honolulu. After discharge from the Navy in 1955, Don and Dorothy shortly returned to purchase a home in Lee’s Summit, and their second son James (Jim) Scott was born July 1, 1958 at St. Luke’s Hospital in Kansas City. Don and Dorothy have remained as life-long residents of Lee’s Summit.

Since graduation in 1949, Dorothy has been a secretary for several companies. She worked for Grolier, Inc., in Kansas City for 17 years. Grolier’s relocation to New York state motivated Dorothy to join Wilson Travel Agency in Kansas City, during which time she was chosen as “Secretary of the Day” by radio station KUDL. Joining the City of Lee’s Summit in 1977, Dorothy started with the Finance Department, later transferring to the Fire Department, advancing to be Administrative Assistant for five different Fire Chiefs until the time of her retirement in 1996. During her tenure with the City, Dorothy earned several notable awards, including the Chamber of Commerce’s “City Employee of the Year” award in 1991, the Fire Department’s “Meritorious Service Award”, and “Firefighter of the Year” award, both in 1996. At her retirement ceremony, she received an honorary Deputy Fire Chief Badge, leading to her enduring nickname “Deputy Dot.” After her retirement, Dorothy remained active in various volunteer activities, including supporting “Friends of the Lee’s Summit Symphony Orchestra”, the gift shops at the Lee’s Summit Hospital and St. Luke’s East Hospital, and she helped establish the gift shop at the Lee’s Summit Historical Museum, later named in her honor as “Dorothy’s General Store”. She also enjoyed participating in, and supporting, the P.E.O., Red Hat Society, local Bridge clubs, as well as sharing her excellent cooking and recipes with family and friends.

Dot. It is hard to say goodbye. I loved you so much.Oh that smile and the twinkle in your eyes!!!. You are now with so many who loved you. My mom is right there with you waiting for a cookie or piece of chocolate. You left a mark on my soul and in my heart.

Dorothy was a beautiful lady and dear friend and I will miss her. Blessings to her family

I worked e Dorothy at the LSFD back in the 80s and we remained friends ever since. She was a great lady.

Debbi and I extend our deepest condolences and sympathies to Don and family.

Dorothy was a fine Christian lady and a very caring and kind person.

She gave greatly if herself to many organizations including the Lee’s Summit Symphony Orchestra. She was an original member of the Friends of the Symphony and as such volunteered countless hours to the Symphony.

She was an excellent cook and homemaker as well as a dedicated professional.

She will be deeply missed.

Sending prayers to Don and the family.

Jack, Anne & family, I am very sorry for the loss of your mother and grandmother. I never met her, but I truly enjoyed reading about this extraordinary woman in her obituary. My love and blessings to you all.
Jackie Krinke

I clicked with this lady the first time I met her. She was so nice with spice and I loved her! Sleep tight sweet lady.

Condolences to all who loved her.

Dorothy’s bright smile & pleasant attitude will be missed by many. I hope her Family will be comforted by the blanket of love from so many that knew her along with your fond memories. God Bless you all & God Bless her soul.

Jim,
I’m sad to hear about your mom’s passing. Know that our family prays for peace and comfort for you all.
Tony, Amy, and Sam Hindman
Hay Springs, Nebraska

I worked with Dorothy at the Fire Department for a several years. She was a classy lady and always had a smile on her face. I would see her many times through the years following my departure from the LSFD and we would always speak fondly to one another. I’m sorry to hear of her passing. Condolences to her loved ones.

My deepest sympathies for you and your family, Dot will be dearly missed.

Don, Jim, Jack, and Anne,
We were sure sorry to hear of Dorthy’s passing.

Dorthy was the epitome of being gracious, kind, and fun. It didn’t matter what the occasion, she could pull it off and keep others on track.

I will always fondly remember our trip to Vegas and her secret Bloody Mary’s.

God Bless the Purtle family and let them find peace at this difficult time. We know Dorthy is in great hands right now. I also know she is busy helping others like she did here on Earth.

I had the opportunity to meet Dorothy and Don in Bentonville, Arkansas when they were visiting their son, Jim. I was thrilled to have dinner with Don & Dorothy and get to know them. Dorothy was a wonderful sweet lady! My prayers, condolences and deepest sympathies to Don and the family

Although Dorothy was a neighbor, just around the corner, I didn’t see her that often. It seems she was everyone’s neighbor through her dedication, kindness, and enthusiam. I do remember taking my grandson to her door to see her smiling face as he sold Boy Scout greenery. She supported him which meant the world to me. May God comfort and bless the family and give you peace.

My sincere sympathy to Dorothy’s family. She was a special lady
and dear friend as well as a PEO sister. She will be missed.
Most sincerely, Wanda Carson