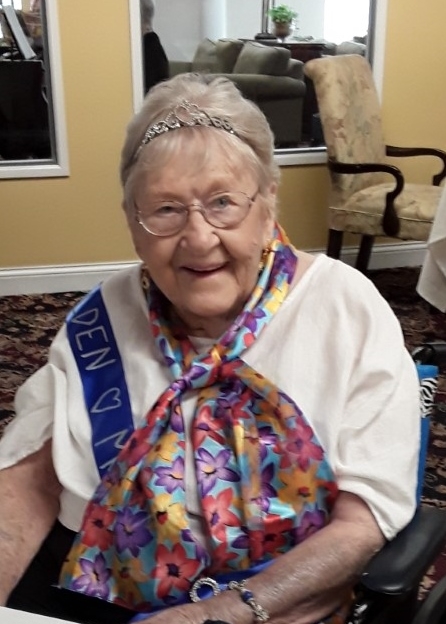 Edna Hulda (Weymuth) Atherton, 96, of Holden, Missouri, passed away on Sunday, October 27, 2019 at Holden Manor Nursing Home in Holden. Funeral services are scheduled for 2:00 PM on Saturday, November 2, 2019 at Langsford Funeral Home in Lee’s Summit, Missouri. A visitation will be one hour prior to the service. Burial will follow the service at Mt. Washington Cemetery in Independence, Missouri. Memorials and contributions are suggested to St. Matthew’s Lutheran Church of Lee’s Summit, Missouri.

Edna was born on September 8, 1923 in Mora, Missouri to George Fredrick and Emma Margaret (Schroeder) Weymuth. She attended and graduated from Stover High School in May of 1941. She was married to Willis Edgar Atherton on February 18, 1942. They moved to Yakima, Washington for a few years and then returned to the Kansas City area where both Emily and Janice were added to their family. When Janice was old enough to travel, they moved back to the state of Washington for several years and returned once again to Kansas City, Missouri. Once the girls were in school, Edna was given the idea of starting a business of transporting children to the private school that they attended. She and Ed invested in a 9 passenger station wagon for her business. She drove for Messiah Lutheran for several years and then began driving for the Independence, Missouri school district for the next 41 years until a mandatory retirement from driving. Then she rode as a rider/helper for handicap children.

Edna had several hobbies: sewing, cooking, crocheting, playing cards, and organ lessons. She loved to cook for others and could always make room for one more at her dinner table.

Dear Janice and Emily,
Crystal and I are so sorry for your loss. Condolences to you, and your family. It looks like she lived a long, and full life!?♥️

Sorry for your loss I loved Edna she was funny easy to talk to and loved that she loved breakfast! I will miss her l