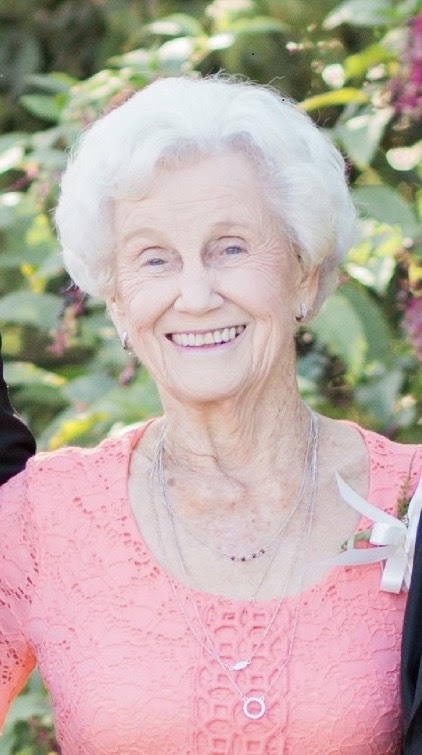 Elaine Marie (Schmid) West, 91, of Lee’s Summit, MO, passed into the arms of her loving Lord and Savior on August 21, 2020, to join family members who preceded her. Elaine was born to parents Gottfried and Sophie (Wachter) Schmid who separately immigrated to the United States from Switzerland and married in Kansas City, MO. At the time of her birth on January 18, 1929, her parents lived in the Martin City area. Farming was her father’s profession and that soon took them to a farm in the Hickman Mills area. Elaine’s sister, Fredrika (Fredi) was born 16 months after her and they were always very close. The farm in Hickman Mills was next to the Truman farm and Elaine spoke about carrying lunch to her father’s farm hands who were putting up hay for Harry Truman. The family moved to Lone Jack, MO, at the end of her grade school days. Elaine’s high school days included playing the bass drum in the marching band – even though she was always very petite. During her time at Lone Jack, she met the love of her life, James D West.

Jim and Elaine were married in May 1948 for 48 years until his unexpected death in 1996. Their union blessed them with five children – Cynthia (1949), Connie (1950), Daniel (1955), Charlene (1958) and Carolyn (1964). When her parents moved from Lone Jack to 80 acres on 291south highway in Lee’s Summit, Jim and Elaine built a home on the corner acre (1953).They lived here until 1976 when they purchased acerage and built a home in Centerview, MO. They moved back to Lee’s Summit in 1987, to be closer to grandchildren and family activities. Elaine was first and foremost a wife and mother, and she focused on caring for her family and keeping her home meticulously clean. She ensured that her family members had clean, starched, ironed and mended clothing, and she had dinner on the table every evening when Jim came home. Elaine was an active PTA mom, 4-H leader, and chauffeur for all five children. She sold real estate briefly to earn money for the home built in Centerview. As her parents aged, she also became the care giver for them. In addition to her family activities, Elaine participated in many social/service groups throughout the years including: the Jaycee Wives, The Kansas City Swiss Society, Ladies Club in Centerview, The Bingo Girls in Lee’s Summit, “Grandma Club,” and the “Golden Girls.” Many of the friendships they formed during high school and their early 20’s lasted a life time. Elaine loved to host gatherings and serve homemade ice cream, German chocolate cake, and many other sweet specialties. Elaine enjoyed camping and canoe trips with the family on Missouri lakes and rivers. She traveled to various destinations in the USA and made two trips oversees to Switzerland to visit relatives and see her parents’ childhood homes. Jim’s profession as an electrician with IBEW Local 124 offered the family a wonderful facility for summer picnics and swimming at the electrician’s pool.

Elaine demonstrated true unconditional love to her husband, five children, 14 grandchildren, and 19 great-grandchildren, and her legacy will continue through them. Through the years she attended countless athletic events, dance recitals, piano recitals, music concerts and graduation ceremonies. Her “love language” was baking for her friends and family. As the family grew, celebrations would be for 50+ family members. For each birthday celebration, she baked the birthday recipient their favorite dessert, with cheesecake, German chocolate cake and Red Velvet cake being the most requested. Using her antique, cylindrical, metal loaf pans, she would make banana bread throughout the year so she would always have one available for the grandchild or great-grandchildren to receive at special events. She baked over 80 loaves of banana bread in one year.  An “Elaine West Cookbook” was printed in 2014 to share her recipes with family members of all ages. Recipes included 40 favorites including banana salad, German potato salad, dinner rolls, and cinnamon rolls.

The West family extends a special thank-you to her faithful friends who visited and supported her until her death; to the IBEW Local 124 and office staff for their assistance and support to Elaine with medical insurance and retirement benefits; and to the staff of John Knox Village Care Center.

A celebration of life service for Elaine will be Sunday evening, August 23, 2020 at 6:30 PM (to be held outside) at Fellowship Church-Greenwood, 1061 West Main Street, Greenwood, MO 64034.  Private burial for family on August 24 at Lone Jack Cemetery.

In lieu of flowers, memorials are recommended to:

West family: Am so sorry for your loss. I know she has been struggling for some time and is now with loved ones in heaven. She was a sweet lady.

Your Mom was so helpful getting our mother through our dad’s death. The Golden Girls were a special group. Our condolences to your family,
Sue

Your sweet mother had many accomplishments in her life and left an amazing legacy with all of her loving children, grandchildren and great grandchildren. We are so sorry that you have lost her here in earth, but you know she is watching each of you from Heaven.

Dear Charlene.
So sorry to hear of your mother’s passing. May she Rest In Peace. Prayers for you and your family!

May your family be comforted by the knowledge that one day you will meet again!
Love and prayers to all.

Longtime family friends all the way back to Switzerland. We share in your sorrow for all of you and wish you God’s comfort and peace. Heaven has gained another angel. Hold Elaine’s memories close in your hearts. Sending love and prayers to all of you.

I send my love and prayers to Elaine’s family. I wish I could be there Sunday evening to see and meet everyone. Maybe another time. My love and thanks to Carrie who has been so good to keep me up to date about Elaine. I hope to see you all soon, Betty K (Schimd) Doyle. pbdoyle@windstream.net

My prayers are very much with you and your family

I wish everyone could have been touched in at least some small way by Elaine West. So many people today (I include myself in this statement) could learn from the loving and giving way she lived her life. Thinking and praying for her family. I am hoping you find peace and comfort in your wonderful memories of this special lady.

praying for your family.
blessings from a friend @ fellowship greenwood

Our thoughts are prayers are with you

My condolences to the family! I am a nephew of Fredi Necessary. Love, Art

Charlene, I was so sorry to hear of your mom’s passing.My thoughts and prayers are with you and your family. She was a special lady and her legacy will live on.She will be greatly missed!

Elaine was such a sweet woman. We are so sorry to hear of her passing. Our condolences to your family.

ELAINE AND I HAD BEEN FRIENDS FOR OVER 50 YEARS AND SHE WAS ALWAYS THE SAME. A TRULY BEAUTIFUL LADY ALWAYS GLAD TO SEE OR TALK TO YOU. WE WEREN’T ABLE TO SEE EACH OTHER WHEN SHE WENT TO JKV. SHE ALWAYS SENT ME CARDS. I MET HER IN REAL ESTATE AND HAD REAL ESTATE TRANSACTIONS WITH ALL HER CHILDREN EXCEPT CINDY. WE BOTH SHARED HAVING LOST OUR DAUGHTERS. HER SERVICE WAS BEAUTIFUL AND SO FITTING THAT IT COULD BE OUTSIDE. I KNOW SHE AND JIM ARE TOGETHER NOW WHICH SEEMS SO FITTING. HER FAMILY IS A BEAUTIFU LEGACY TO LEAVE BEHIND. SHE WILL BE LONG REMEMBERED.

It’s so hard when your momma passes. Especially, if she’s been in pain for too long. Relieved she is no longer suffering but no longer here to hug. My heart aches with you. Praying for peace beyond our understanding.?