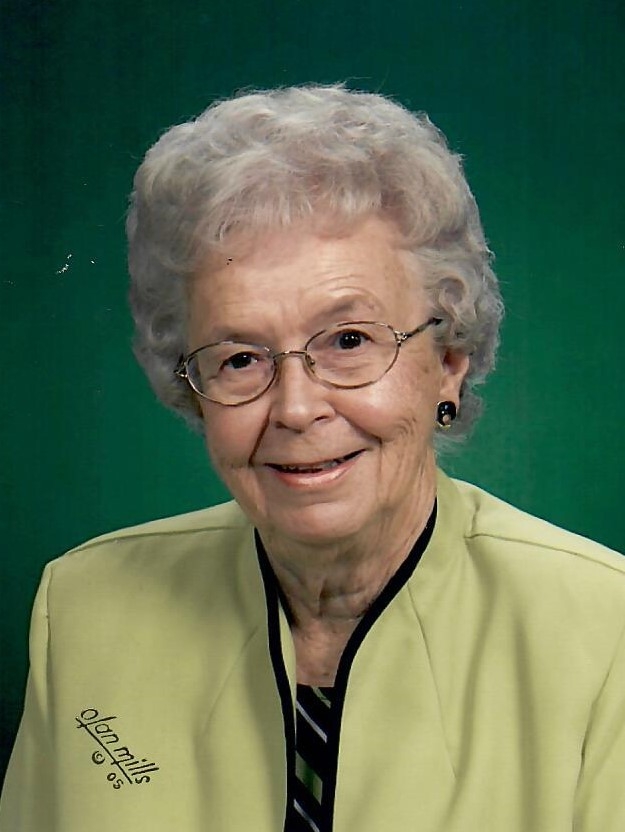 Esther Alley, age 96, of Lee’s Summit, MO, was born Mary Esther Bowin on the family farm in Greenwood, MO. She was the middle of 3 children of David “Earl” Bowin and Mary “Agnes” (Barron) Bowin. Esther attended a one room school for 8 grades and graduated from Pleasant Hill High School in 1943.
After high school graduation and a year working at Pratt and Whitney, she attended college at the University of Missouri, Columbia. Esther returned home to work at Pratt and Whitney during the war effort, and then was employed at the Gas Service Co, Lee’s Summit.
Esther married Kenneth Alley Dec 2, 1950, who passed away in 1980. They had 3 daughters. She remained home until the youngest of their daughters was in 1st grade, then went on to become an administrative secretary for the LS School District. She worked at Westview Elementary for 4 years, and then helped open Pleasant Lea Elementary where she remained the secretary for 22 years. In 1986 she received the “Reaching the Mark” award from the R7 School District. Her retirement was in 1989, but Esther continued to substitute in the district until 2002.
She was a volunteer at LS Christian Church office beginning in 1989 and with the LS St. Luke’s East Hospital beginning in 2006. She held both volunteer positions until she was over 90 years of age.
Esther was a member of LS Christian Church, a lifetime member of MO PTA, and a member of JACOMO, retired school personnel association. Family was the center of her life. In addition to supporting her church and community she enjoyed gardening and reading. She was an absolute die-hard Chiefs and Royals fan.
Esther is survived by her 3 daughters: Susan Alley, Springfield, Nancy (Matt) Buchmann, Leawood, Kathy Gilmore, Brentwood, CA, brothers David E. Bowin, Jr (Ruth) and James R. Bowin of California, granddaughters Jennie (Russell) Clay and Kelsey (Christopher) Able, great grandsons Barrett Clay, Brock Able and Graham Able, and extended bonus family Deana (Kristi) Gilmore, David (Courtney) Buchmann, Helena Buchmann – as well as several cousins, nieces and nephews.
Graveside service and internment to be held 1:00, Tuesday, December 28, 2021 at Floral Hills East Cemetery in Lee’s Summit, MO.
Memorial contributions can be made to the Lee’s Summit Christian Church memorial fund or Lee’s Summit Education Foundation.
Arrangements by Langsford Funeral Home, 115 SW 3rd, Lee’s Summit, MO 64063

I always saw and visited with your mom when we exercised at Gamber Center. Esther was such a pleasure to talk to. I would take communion to her on Sunday (when it was my turn) and enjoyed visiting with her. She always had a smile on her face. I’ve thought about her a lot. She is finally with her loved one in Heaven.

Esther was a very special lady. We became acquainted in a retired secretaries luncheon group. She rarely missed a luncheon and was always so cheerful. Rest in Peace, Esther.

Although Tim and I never had the opportunity to know Esther personally. I feel like we do know her through Nancy: her strength, loving kindness, perseverance and love of family. Indeed, there is never enough time but we are thankful she is in heaven-no more pain or sorrow. Our prayers are with the whole family and all her friends.

Esther, as my sister, played a vital role in my early life. We were exactly one year apart in age, however my folks were able to get us starting to school together. So from 1st grade until we graduated from high school we were thought of by many to be twins. Esther was such an inspiration as she encouraged me in so many different ways during our school years. We also had so many good years on the farm where we were raised. We grew up during the “depression” years, but our folks made it easy for us to not be concerned with hard times as such. It was great to work & play together. It’s a blessing that now Esther
has left her earthly tent, & now is safely on heaven’s shore. I’m thankful for the goodness of the Lord, that I had such a sister.
Bro. David E Bowin, Jr

Esther was always such caring wonderful woman. I knew her when my boys went through PLE.And we continued our friendship when I became a secretary at PLE. She was always so willing to share her wisdom and expertise with me. The time I cherished the most was meeting at the district Retired Secretary Luncheons.

Although I did not know Esther well, I know what a wonderful Mother she was to my special friend, Nancy. She was an inspiration to her children and gave to her community unselfishly. May she rest in love and peace and be blessed in the house of our Lord in heaven.

Esther was warm and friendly to everyone she met. She was an inspiration as she continued to volunteer in our church’s office and at St. Luke’s East Hospital until she moved from her home and could no longer drive.
Our thoughts and prayers are with her family.
May your lifetime of wonderful memories bring you comfort. Rest in Peace, sweet Esther.

Met this lovely lady in 1972, when I landed in LS and PLE. As years went on, we attended concerts, Royals games and drive by picking up or her delivering her famous tomatoes! She was involved with so many lives, may she know how much she will be missed! Rest peacefully, Esther!❤️

Very sorry for your loss. Esther was a lovely lady and will be missed. I hope the memory of Esther will bring joy to your lives. My thoughts and prayers.

I was so privileged to meet Esther when she substituted in the office at Meadow Lane Elementary, where I worked. She was such a sweet person who always had a smile and kind words to say. It was a privilege to know her and a sunny day when I got to see her. She will be missed.