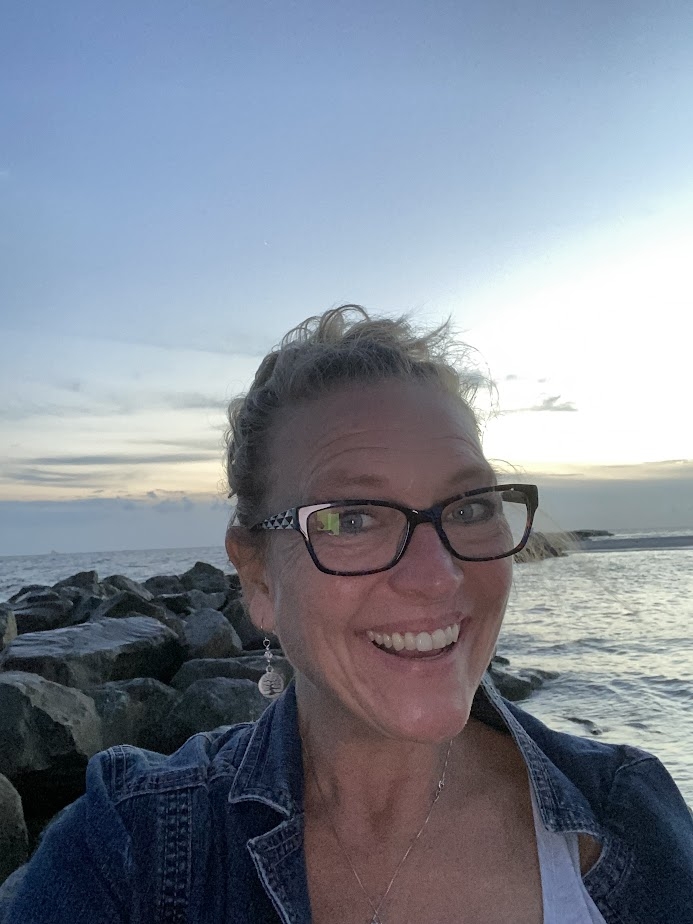 Gena was born Gena Renee Fischer on September 27, 1968, in Kansas City, MO. She spent her early years in St. Louis before her family moved to Blue Springs, MO, where she spent the rest of her childhood before graduating from Blue Springs High School in 1986. Gena attended Southwest Missouri State University (as it was known at the time) before graduating from Avila with a Bachelor of Arts in Theater in 1990. It was through her passion for theater that she met and fell in love with Todd Baxter Robertson, and the two were married on November 19, 1994.

Though her love for the theater never faded, Gena spent her professional career in the IT sector. She worked for companies such as Empower and Sprint before she began at SkillSoft, where she ended up working for more than 20 years. Gena’s job allowed her to work from home, which afforded her the time to be at home for her sons, Keenan and Evan, who she loved with all her heart.

Gena will be remembered for her relentless optimism and her infectious smile. She was vivacious and kind. Bright and cheerful. Gena was a friend to everyone she met and never knew a stranger. She will be dearly missed by all who were lucky enough to know her.

Gena is proceeded in death by her husband, Todd Baxter Robertson; her parents Lillian Claudine Fischer and Kenneth Paul Fischer; her sister Charlene Lakey; and her mother-in-law Doneta Robertson and father-in-law James Robertson. She is survived by her sons, Keenan and Evan; her sisters Laurie Quail and Paula Brant; her granddaughter Presley; many nieces, nephews, cousins, and people who knew her as Aunt GiGi.

Services will be held at the Langsford Funeral Home in Lee’s Summit, MO, on Sunday, January 8, 2023. Visitation from 1PM-3PM with a service following.

In lieu of flowers, memorial contributions can be made to help with funeral costs at the following: https://gofund.me/4fb8a781

Your Mom was my favorite parent at Richardson Elementary. Talking to her always made my day. I’m so very sorry for your loss.

We are saddened to hear of Gina’s passing. Our hearts go out to her sons, sisters and family. We are fortunate to have spent time with Gena this past summer while visiting Paula and Roger in Knob Noster. She was a beautiful woman and are grateful to have known her.

We pray to God for blessings and comfort for her family and friends.

She was one special girl!

Condolences to the family. I grew up with Gena and loved our time together at Blue Springs High School. We were cheerleaders together and spent a lot of time cheering on our dear Wildcats. I have so many fond and special memories of Gena, homecoming courts, prom, hanging out, sleepovers.. She was a bright light in my life and everyone she knew. I’ll miss her. Prayers to the family for strength and guidance.

I had the pleasure of working with Gena at Skillsoft. When I first started working there she was very warm and welcoming. Always had a smile and kind word and always sharp and witty as well. Gena’s smile could certainly light up a room – she will be missed.

I hope she is at peace now and I am sending healing prayers to her sons and family.

My heart goes out to Gena’s family and her friends. Such a beautiful soul gone too soon. May she rest in eternal peace.

My deeply sincere condolences to Gena’s family and friend for her passing. I worked closely with Gena over 10 years ago as the Payless Corporate Headquarter’s Employee Development contact for designing and implementing SkillSoft e-learning. This was a monumental effort which was successful due to Gena’s knowledge and patience with me and others at Payless. She was delightful to work with and I considered her to be not only a colleague, but a friend. May your memories provide you with some comfort during what I know is a challenging time in all your lives. Sheryl Stanley

May God richly bless the family and provide peace and comfort during this difficult time. We send our condolences to the family. In Him Ric and Kathy Rubeo

Gena was a dear friend of our daughter, Jenn Gropel, and Jenn has been devastated by her passing. Butch and I were fortunate to spend time with Gena, Todd and Jenn on a work related event at Punta Mita Resort in Mexico. Gena was a ray of sunshine. We pray for strength for her family at this time.

Gena was one of my most talented and enjoyable students. She was in my eighth grade drama class as well as in eighth and ninth grade forensics. She was a real natural. I am very sorry for your loss. She is one of my favorite middle school memories.

I didnt know Gena well back in high school, as I was a grade younger, but she was someone who everyone wanted to know. I was fortunate enough to have a drama class with Gena and one time, she chose to do a scene with me. I have no idea why she chose me, but it made me feel on top of the world. She was kind, laughed a lot and showed that brilliant smile. She made the world around her a happier one.

I pray that Gena’s kids, family members, and friends can find peace and think fondly on their times with her.

I’m sorry for your families loss. In my prayers. Way to soon. God bless

Gena was my suite mate my freshman year at Southwest Missouri State & quickly became one of my dearest friends. We continued to live together our sophomore year and I even traveled with her to Dallas to visit her sister during spring break! We had so many wonderful memories of our college life. She even caught the bouquet at my wedding! We had lost touch for awhile due to busy lives & raising babies but thankfully facebook reconnected us and it was wonderful to see her full life & beautiful family. I only wish I had known how much she was struggling. Gena will always hold a special place in my heart and will never be forgotten. May she rest in peace & love ❤️ Sending many hugs & prayers for her family & friends.

I have been praying I know Jesus is holding you I remember when Gena gave me a free Sprint phone card during a hospital stay so I could call home. She was so caring and beautiful she will live on in my heart and mind forever

Gena was a delightful young lady who grew up just a few houses from us in Blue Springs. She was a special friend of my son, Tim Wilde, as well as a classmate of his at BSHS.
I shall always remember her smile and friendliness.
My prayers go out to her family and to all the many good friends that she had. She will be missed by many!

Gena was my flower girl August 14,1971. She will be missed and loved by so many. She always had a million dollar smile and I will always love her.

I loved Gena. She was such a bright light. She was part of our Skillsoft Girls Club. Nothing you don’t know, but she loved to show her love to those she wanted in her life. She was never judgemental, she was always a willing ear, but she also had such a vulnerable side. No one loved their husband more than Gena loved Todd and she a devoted mother. I will miss her so so much!
Marci Krasowski

To Gena’s family,
I am shocked to hear of Gena’s passing even knowing how hard she took Todd’s. As I read the obituary, I was taken back to times I spent with her as my Skillsoft partner especially in Las Vegas years ago for its annual conference. The obit is a true description of who she was and our world is sadder without her. However, I know she touched so many lives and brought so much happiness to whomever she knew.
Praying for your strength and comfort and the peace knowing her loveliness impacted many and that her legacy will live through her boys.