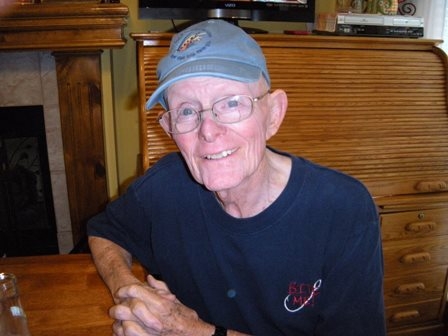 George Bright, 89, returned to the Lord, is dancing with his wife, and got his memory back!

After many years of battling Alzheimer’s Disease, George was made whole again. George was the quintessential “pal,” happy to converse over coffee or a cold beer with just about anyone. He was spunky, ornery, and cherished.

George was a member of the men’s group TGIW where he prided himself on near perfect attendance. He was also a long time member of the Elks Lodge where he served in many roles, most notably as Grand Poobah.

George will be profoundly missed, but we rejoice in knowing George remembers what a wonderful life he led.

Sharon
I wish I had known your Dad,…..and Mom.
I would have enjoyed their company.
Dear Sharon,
You are so lucky to have such a great Dad….
Hang on to all the great memories and smile….he was a great one.
Joe and I are praying that you to feel all the love and affection from your family,
friends, and co-workers…it will help carry you through these sad days.
God bless you now and always,
MKR and JOE

Dear Sharon and Karen, what a long list of grand children and great grand children! I’m sure the love was endless for your Dad! Love and prayers to all of you! Babs

I had met you when I was one years old and the best neighbor (that became like family) anyone could ask for. You are missed.