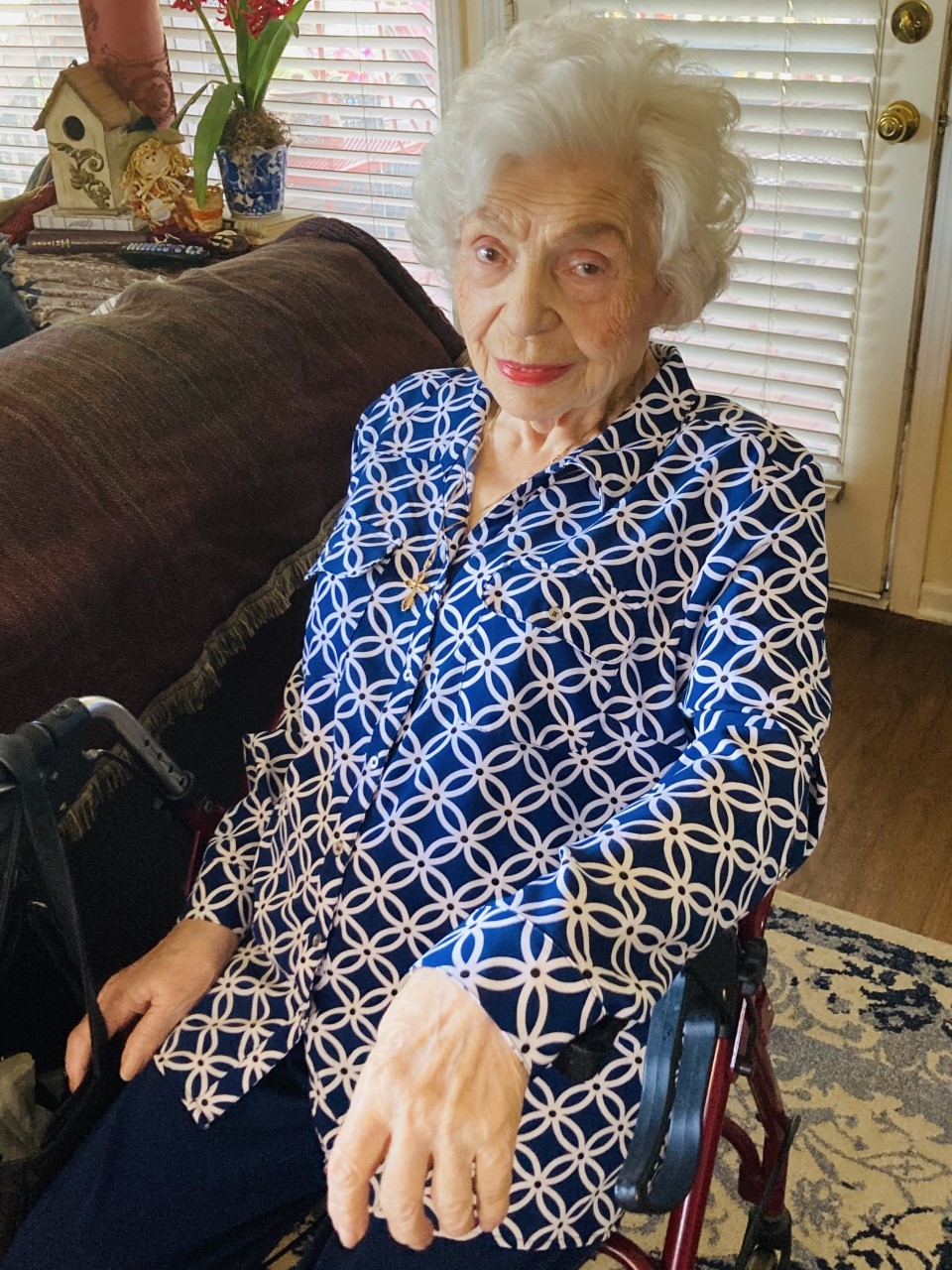 Our precious mama, Gertrude K. Kurtz, got the desire of her heart and went to meet Jesus personally on July 20, 2022!! She was 91 years old and had been wondering for the last few years why God chose to keep her around for so long. She told us many more times than we can even remember that she was ready to go HOME!

A Visitation will be held Wednesday, July 27, 2022 beginning at 10:00 am with a Celebration of Life service following at 11:00 am at Langsford Funeral Home, 115 SW Third St. Lee’s Summit, with burial in Lee’s Summit Historical Cemetery.

Mama was born in Kedainiai, Lithuania the fifth of eight children born to her parents, Richard and Monika Neumann. She was predeceased by her parents and siblings Richard, Henry, Carl, Yenny and Monika, and is survived by two brothers, Eduard Neumann of Independence, MO and Helmut Neumann of Arroyo Grande, CA.

At the age of 10 her family emigrated from Lithuania to Germany under circumstances that were less than desirable due to political tensions beyond their control. They lost their home and all their earthly possessions to arrive in Germany and survive for countless months in cramped refugee camps where they dealt not only with filthy conditions, but also a lack of food, adaquate personal hygiene, lack of educational opportunities, as well as an unknown future.

Despite everything, they were able to rebuild their lives and settle down in Germany eventually. Because our grandmother had three more children after mom was born and suffered major health issues during those years, our mama was counted on to help care for and raise her two youngest siblings. She grew very close to her little sister Monika and was devastated by her early accidental death at the age of 11.

Living under the Nazi regime as a child produced many hardships that served to build a strong and resilient spirit in Mom. We heard many stories of days spent with her cousin walking for miles scouring farmers fields to try and dig up a potato to stave off hunger pains, and of soups made with little more than broth. There apparently were many nights they went to bed hungry.

For all the stories she shared with us, we are pretty certain there were many more memories that were just buried too deep and were too painful to share.

During WWII life grew even harder. Her family became seperated into different zones created by the Americans and the Russians. There were more stories of travels she made alone as a teenage girl through backroads and wooded areas trying to help reunite her family, starting out with a horse drawn wagon but having finally to abandon even that and go on carrying only what they could on their backs or in their arms. Once she said she was caught trying to cross into the Russian zone without the proper paperwork and was thrown in jail for days, not really knowing what would happen to her.

Mama emigrated again from Germany to the US after WWII, on her own at the age of 21, leaving all of her family members and loved ones behind to live in New York City with an aunt she’d never met. She made the long journey by ship and said that pulling into New York harbor and seeing the Statue of Liberty for the first time was a highlight of her young life. She worked hard over the next several years to gain legal citizenship and was always proud to be an American! She never went to college, probably barely completed high school if truth be told, yet she learned five different languages throughout her lifetime to be able to communicate!

She and our dad, Ralph Kurtz, were married in Independence, MO in 1954 and were married until he passed in 2013. She is survived by all four us adult children: Stephenie Bernal (David) of Lee’s Summit, MO; Steven Kurtz (Denise) of Greenwood, MO; Julia Moline (Larry) of Independence, MO; and Victor Kurtz (Christi) of Peculiar, MO, 21 grandchildren and 16 great grandchildren. Her grandchildren Angel Kurtz and Nathaniel Bernal were waiting to welcome her into Heaven when she got there!

One of her greatest joys in life was found in motherhood and family. After everything she endured early in her life, she worked incredibly hard to ensure we all were able to live the American dream! Her work ethic was unparalleled, her love given sacrificially, and her discipline metted out strictly, always with the intent of producing in us a sense of responsibility. She kept an absolutely spotless home, had a passion and a knack for decorating, was extremely well organized, sewed our clothing, always went above and beyond to make Christmastime and other holidays special, and was an absolutely amazing cook! She thrifted before thrifting was even a thing, worked night jobs to help support our family when daddy was laid off, attended more little league games than I’m sure she could ever keep track of, made sure we all four took piano lessons to give us opportunities she never had, and set an expectation in our home that we would be good students and fine people before anything else.

Her love for her children only grew as we all began to leave the nest and the grandchildren began to come along. She was always there to help, guide and suggest as we grew into our own stages of parenthood. She loved all her grandchildren unconditionally and was proud of each and everyone of them. She relished the joy they brought into her life and cherished her great grandchildren and time she was able to spend with them just as much. She faithfully prayed for each one of us through the years, and that was definitely a blessing that always brought a lot of comfort and that we could always count on!

She was a longtime member of Faith Baptist Church in Lee’s Summit, where she came to a saving faith in Jesus as Lord many years ago! She loved the Lord with her whole heart! In her younger years she was always faithful in serving Him through many church ministries whether working in the nursery, helping with VBS or decorating the church for holidays. Her faith in action was something that defined her life, and a true legacy she left us all to live up to. Memorial contributions can be made in mom’s honor to the church, 1460 Langsford Rd, Lee’s Summit.

Mama, you lived an incredible life. You were always a strong willed, very determined person. You had strong opinions and a definite sense of right and wrong, and you lived by your convictions. You taught us how to really care about people and love one another well by the example you set. We love you and we miss you already, but because of Jesus we know we will see you again!! What a day of rejoicing that will be!!

What a beautiful tribute Stephenie. Your mother lived a unique part of history and you told her story beautifully….of course.

Trudy was a very special lady. I enjoyed talking with her almost every week. She always asked how everyone was and full of kind words and compliments. Even to people she did not know.
I had the pleasure to know her for more than 40 years! Yes , she was a good cook , I was fortunate to enjoy a few meals at her home .
I believe in my heart she is with Jesus in Heaven, celebrating!
I started missing you this week and will see you for many weeks in my thoughts.
Blessings to the family

Julia, we will be praying for your family.It sounds like your mother knew her maker and that she is happy to be there.I know it is hard to lose a parent just be happy for her.

Stephenie this tribute provides an amazing glimpse of the tragedies and triumphs your mother experienced. You lovingly cared for her in your home until it was time for her to meet our Lord and Savior Jesus Christ, the Prince Of Peace.

Julia, what a story. What a life! Your mom did an incredible job and her values will live on through your family. I’m so glad she shared the stories with you all. Many times the pain of the past allows history to die with the person, but you all will have stories to past to all generations and help keep history of the past that has been watered down alive. I’m sorry for your earthly lost but as we see the Bible coming to life I know you all will see each other soon as the rapture approaches and we all meet our King Jesus.

What amazing tribute to your mama…What amazing women that I have gotten to know and loved her so deeply…She had my heart from the first day I did her hair…I will truly with all my heart miss this beautiful lady and her wonderful family…Trudy always had such kind words to me and anyone around her..I have cried many tears this week because I’m selfish and wish she was still here on this earth,but I’m also very happy she home where she wanted to be and celebrating her eternal life with family and friends…
So,for now Trudy, I will miss you and I hope to see you again,my friend…
Love you,
Leslie Shockley

Dear Stephanie, Steve, Julia, Victor and family, I’m so very sorry to learn of your mother’s passing. It’s very hard to lose a mother – even if she is ready to go Home. The tribute to her was lovely – what a strong resilient woman!

Our sincere condolences go out to your family. Thank you for giving such a beautiful tribute to your mother. The struggles and hardships she lived through, and then overcoming them through her love for her family, and serving in the home, is all so inspirational to those who read this tribute. What a wonderful example for all of us!
May God bless you with His Comfort and Gratitude for the gift of a loving, godly mother.

Stephenie, Steve, Julie and Victor,
I will always remember how fortunate I was to be a welcomed guest in your home growing up. Yours was the only house my parents let me stay over on a school night, they knew your mother ran a tight ship, right?
The tribute is beautiful. Blessings and love to you during this time of great loss. Heaven has opened and a new believer has arrived. Much love,
Joni

MY CONDOLENCES TO YOU AND YOUR FAMILY. ANYTIME ONE LOSES A MOTHER IT BREAKS ONES HEART YET SHE IS IN A BETTER PLACE. HER LIFE WAS ONE OF RESILIENCY TO THE END. NOW HOME WITH THE LORD AND FAMILY. PEACE BE WITH YOU.
BOB