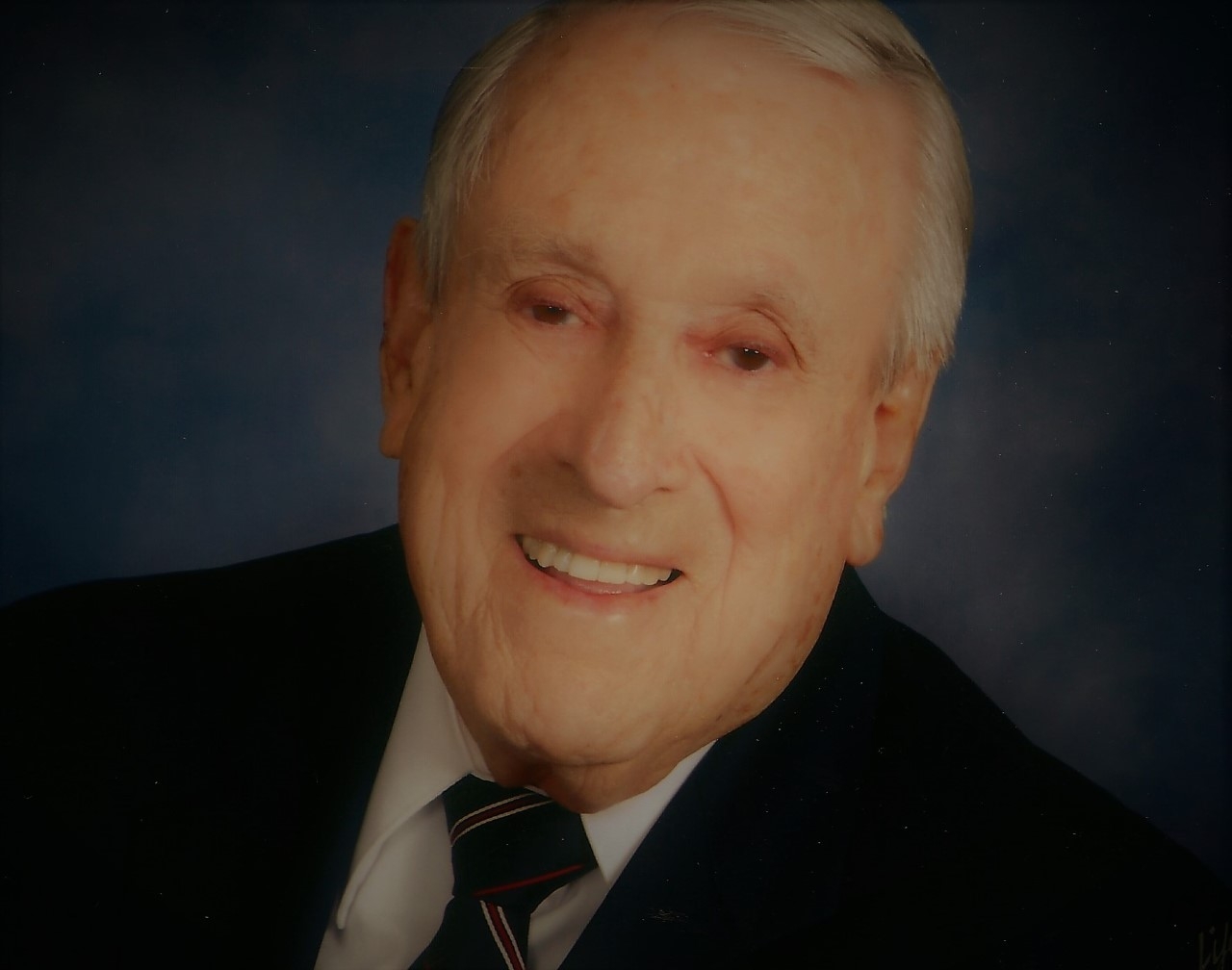 The Lord called Glenwood Lee (Woody) LeGrand home at the age of 97 on February 7, 2019 with family by his side at John Knox Care Center in Lee’s Summit, Missouri.

He joins his wife, Betty (Harris) LeGrand, who preceded him in death on July 18, 2005 after 63 years of marriage where he is surely singing her favorite hymn, Amazing Grace, to her on his beloved guitar.

Woody was born on June 18, 1921 in Herculaneum, Missouri to Ernest and Beulah (Huddleston) LeGrand, who preceded him in death.

He then married Betty on July 25, 1942 where they made their home together for 62 years in Festus, Missouri.

At the beginning of his marriage he joined the U.S. Army Air Corps and served his country proudly in World War II. Following his service, he spent his career as a maintenance supervisor at PPG industries in Crystal City until his retirement. He was an active member of First Baptist Church Festus/Crystal City and served as a Deacon and chair of the property committee. His favorite activity with the church was as a member of the choir where for many years his beautiful tenor voice was featured in solos. When Woody and Betty moved to Lee’s Summit, as Betty’s health was failing, Woody joined the First Baptist Church of Lee’s Summit.

Woody was a lifelong St. Louis Cardinals fan. He began listening to the radio broadcasts faithfully as a young child. He only agreed to move to Lee’s Summit when he was assured he would be able to see or listen to every Cardinals game. He was never without his Cardinals red cap and bragging rights.

Music was his passion. He filled the hallways at John Knox Village with song as he sang on his way to and from meals and activities. He was a member of the Country Time band where he could sometimes be seen sporting his finest Elvis wig. He brought joy to the residents of John Knox with his country, gospel and occasional Hawaiian recorded selections from his favorite artists as they did their laundry or came to get their mail. Known at John Knox as The Music Man, the halls are much quieter and solemn today without his presence. For many of his friends and the staff, when he passed, it was the day the music died.

Last October, Woody was chosen to make the trek to Washington, DC as part of The Honor Flight representing Missouri and Kansas veterans. This not-for-profit organization brings veterans and their guardians to the nation’s capital for a day of remembrance, honor and respect. He spent the day with other veterans, but most importantly, with his daughter Sue, and granddaughter and grandson-in-law Brooke and Derek, a memory they will always cherish.

A Celebration of Life will be held at John Knox Village Courtyards Community Center at 512 NW Murray Rd. in Lee’s Summit on Tuesday, February 12 between 2:00-4:00 p.m. Interment will be held at a later time at Rose Lawn Memorial Gardens in Crystal City, MO.

My deepest sympathy to Woody’s family and friends for his lose.
He was a very interesting person, always attended the men’s group weekly coffees and his smile and music will be missed around John Knox Village’s Assisted Living.
His memory will live on in our hearts.

I am so sorry. Will keep you in my prayers.

I know from the stories Sue Kariker tells that he was a well-loved father and grandfather. I am sorry for his loss to your family. He must have loved his 90th birthday celebration and Honor Flight experience.

Sue, so sorry for the passing of your dad. Sounds like he was a wonderful person and will be missed. The good memories you must have. Take care.

I’m so sorry for your loss…..Thinking of you & your Family… I know he was very special to all of you….Becky

Sue,
I’m so very sorry for your loss. I have so many wonderful memories of your parents. My favorite is of your dad singing at my Mom’s service.
Lifting prayers for your family.
Love in Christ ,
Leila

I’m so sorry for your loss. He sounded like a wonderful man.

So sorry, Prayers for the family.

Sue: So sorry to hear of your dad’s passing. He was such a good friend to both my parents. I’m sure they’ve already organized a “heavenly” game of dominoes or cards, with plenty of desserts for all. I know you will miss him dearly!

Woody. My boxing hero. And Miss Betty. Spent many times walking through their yard, and stopping by for a drink of water . . . and playing with Terry.
George

Sue, so sorry to hear about the passing of your dad, Woody. I am sorry we were not aware he was ill. I am sure you have many happy memories of your dad and your trip to Washington D.C. being among one of your latest. We wish you and your family our deepest sympathies.

I am so sorry to hear about Woody!! I will never forget him and listening to him sing !! Both he and your mother were a blessing to many of us at FBC/FCC!!

I am sure he will be missed by all who knew him!

But know he his rejoicing in heaven with many of our parents and others from FBC/FCC!!

I’m so sorry about your loss. Woody and Betty were two of my favorite people. My Mom and Dad, Jack and Marcella Cunningham, thought so much of them also. My Dad played the fiddle, so he’s probably fuddlin’ up in heaven while Woody is strumming and singing with that beautiful voice. God bless you all during this time of sorrow.

Randy Sue and Terry,We are so sorry about uncle Woody,I am going to get your cell numbers to chat,Linda has them,God bless you all,The family will be in Festus when you are there,again so sorry,love ,the Johnston family

Condolences. My dad was Betty’s cousin. Last time I saw Betty and Woody was a family reunion I had in Arnold. Mo.

Sorry to hear of your fathers passing but it was clearly a great example of “ a life well lived.”
Condolences from both of us.
Bob & Donna Wallis

Our dear Sue. We were sorry to hear
your beloved dad has passed away
I know how much you loved him
You and Dick are such special friends
We want you to know you are in our prayers. We love you.

I am very sorry for your loss. It is so hard when you lose a parent. Prayers for you and your family.

Sue, I am so sorry to see this. Losing your parent leaves a distinct hole in your life. You were so wise to spent the quality time you did with both your Mom and Dad. You will always treasure those memories. Your recent trip with your Dad will be so special to you. How lucky you were to have that trip with him. So many will miss your father, the music man, but he will live on in many hearts and minds. Prayers are with you and your family and hopefully you will find comfort in the support of so many. Treasure your wonderful memories and the knowledge that he is again embracing your mother and heavenly family. My sympathy and prayers.

I always enjoyed family visits with Aunt Betty and Uncle Woody. Every few months I spoke with him while he was at John Knox and they were very humorous and informative conversations where he told me about his wonderful family and his friends at John Knox.

Our deepest sympathy to the LeGrand family.
Mr. LeGrand was an extraordinary man.
Friends from the Festus, Missouri area.
Sonja and Tony Georges

Chris- sending my deepest sympathy to you and your family. Praying for your strength during this time. Your grandfather lived a long and prosperous life. May God continue to bless you. ??

Woody has already organized a jam session inside the gates of heaven. He’s tapping his toe, singing loudly and smiling as he watches all his buddies join the fun. We’ll definitely miss the “funny” man and his stories. You have been an absolute perfect daughter even when you were re-setting that darn remote control one more time. God Bless Woody for the special memories he gave each of us. Prayers and Hugs for all the LeGrand Family. Scotty and Sue Wade

Dearest Sue and your loving family….You have all been in our thoughts and prayers for God’s comfort since we learned of Woody’s passing. Clearly, his lifetime of loving you and guiding by example leaves his legacy on your entire family. Being a child or grandchild of Woody LeGrand is defined by work ethic, caring and sharing and most importantly—living life to its fullest.
The lasting memories of that perfect smile from Woody will be the promise of comfort beyond your time of grief.
Always missed and always remembered for the joy he shared!