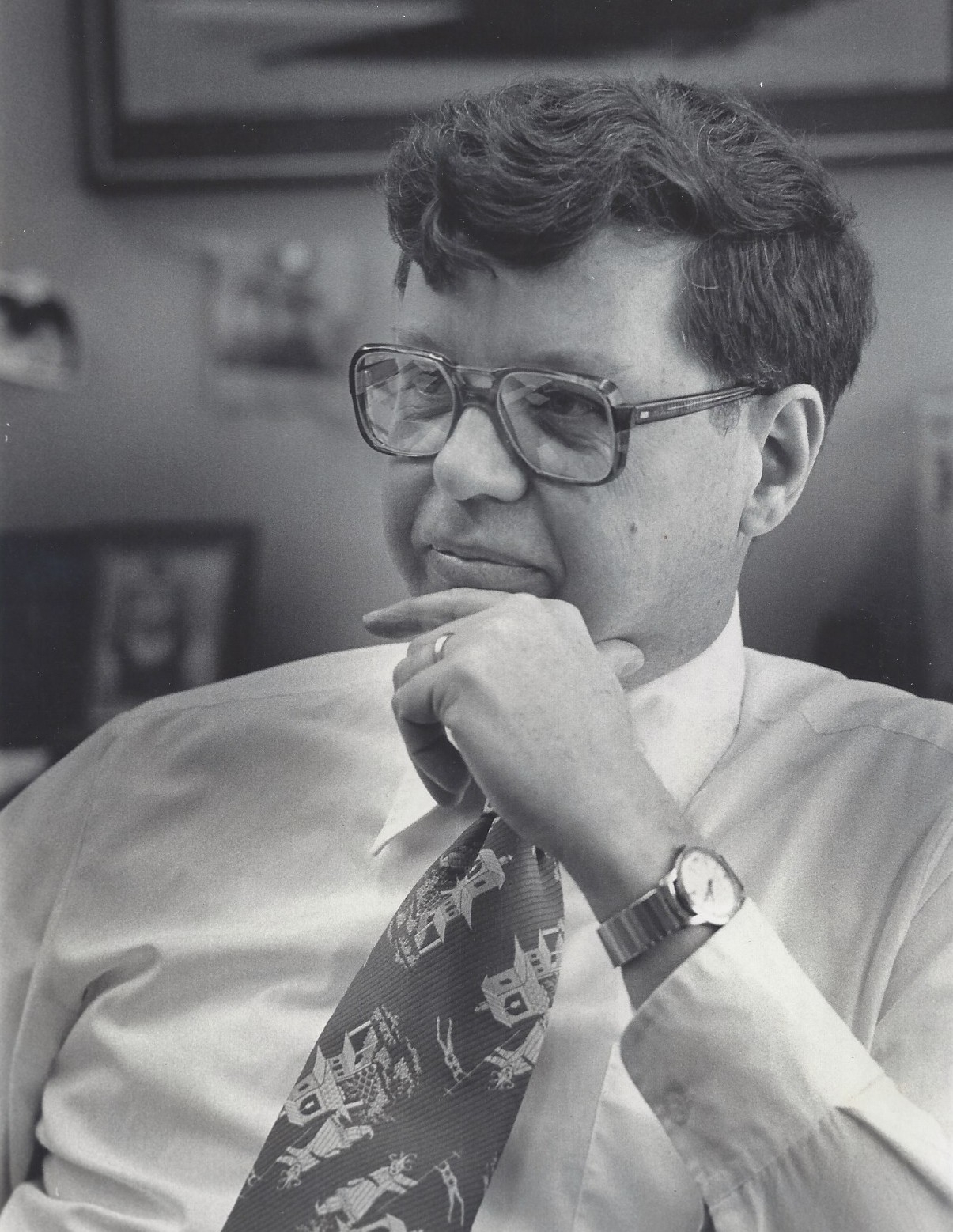 On Saturday, August 10, 2019, Hans Thorvald Rygaard, age 90, peacefully passed away, surrounded by his loving family. Thorvald was born on September 27, 1928 in Atchison, Kansas to Hans and Hester Rygaard. He received his civil engineering degree from Purdue University in 1949, several weeks after eloping and marrying the love of his life, Virginia Edith Brislain. Thorvald and Virginia raised six children.

Thorvald served in the US Army during the Korean War, stationed at Ft Wainwright in Alaska. He was both a licensed civil engineer and a registered architect in Missouri. After 25 years’ service, he left AT&T Southwestern Bell as the head of real estate, going on to practice architecture in the Kansas City and greater Midwest area. He enjoyed mentoring young architects and actively volunteered with the American Institute of Architects.

He loved his family, his church, travel, and photography. Thorvald was proud of his wife and children and their accomplishments. His children remember him for teaching them Christian ethics, self-sufficiency, and service to community. Thorvald was a faithful member of the First Baptist Church of Lee’s Summit for 50 years, serving variously as trustee, deacon, Sunday school teacher, frequent volunteer and mission trip member. With his wife, Virginia, he traveled and avidly photographed the world: from the Great Wall of China, to the islands of New Zealand, the Sea of Galilee, and the canals of Venice. Thorvald always enjoyed new experiences; learning to ski, scuba dive, fly glider planes and bird watching. He earned a pilot’s license and enjoyed flying light airplanes. He was an accomplished water color painter. Thorvald was known for his calm and steady demeanor, analytical problem solving, sly humor, and quiet generosity.

Thorvald was preceded in death by his parents, Hans and Hester Rygaard, his beloved wife of 64 years, Virginia, and his brother and sister-in-law, Leslie and Mary Frances Rygaard. He is survived by his six children, Winifred, Martha, Paul, Lois, Christopher, and Julia, as well as his cousin Carolyn Zarter, two nieces, nine grandchildren, and two great-grandchildren. He was a good man.

Such a loving tribute to what I understand was a wonderful man. Our condolences to the family and please know we share your sorrow in hopes you can soon begin to heal. With Sympathy and Love, David and Normie

A beautiful tribute to the patriarch of a proud and prosperous family. He moves on to join the Lord and his beloved wife, and leaves a wonderful legacy behind for his children and grandchildren to carry on. Our deepest condolences to the entire Rygaard family at this time for your loss. God bless you all.

Beautifully expressed ?
He now is on the greatest of adventures!
Strolling over heaven with his love to experience the warmth of our Savior in the realm of all His glory. He is now experiencing more love, joy and complete peace beyond all he had ever imagined. Mrs Rygaard was not known for her patience and she is probably saying. “Finally!”
Your dad was born one year and nineteen days after my mom in the very same town—Atchison, Kansas—who knew!!
Your dad always held a very special place in my heart, and he always will.?

So sorry to hear of his passing. His legacy lives on in his children-

What a remarkable man. Heartfelt condolences….

Julia. and Bobby. We are so sorry for your loss. God will give you the peace to get thru this.
With deepest sympathy.

Lois and family,
Please accept my condolences on the loss of your Dad. Your tribute to him is so beautifully written. I now know where all of Lois’ incredible talents came from. My thoughts and prayers are with you and family during this difficult time.

Our condolences to the entire Rygaard family and the fellowship of friends who will be missing him. This obituary tribute is a testament to a man who touched many lives and whose spirit will always live on in those who were close to him in life.

Thorvald was indeed a very kind and gentle man with a wonderful outlook on life. He was an engaging Sunday School teacher and without a doubt one of the most intellectual persons I knew growing up. Pretty good father also, just take a look at the Rygaard clan.

Thoughts and prayers for comfort and peace, with many fond memories of your father..

I’m so sorry to hear about Thorvald’s passing. I was lucky enough to be Virginia’s student and then her hairdresser. In the many years of her coming to the shop I got to know Thorvald. He was always kind and thoughtful. My prayers and thoughts are with your family. Debbie

How blessed i’ve been to have had Thorvald in my life, and how much I will miss him. Please know you are in my prayers and wIll remain there in the days ahead. He was so proud of you all!

We were so sorry to hear this. Thorvald was a great friend and mentor for us as well as a pillar of our church. He will be greatly missed. Your family will be in our prayers.

A good man – yes – and a friend to all. The world is a better place because of your parents, and now heaven. My condolences to you and all those whose lives Thorvald touched.

Very sorry for your loss Lois and Chris. Prayering for your family.

We have many fond memories of both the Rygards.. They were faithful Christians and we hope to see them someday in heaven. Our prayers are with the family.

Melba and I were privileged to spend many excellent evenings with Thor and Virginia. No need for games, slides and/or discussions on Scriptures or current events.
This team of fabulous mentors will be missed.

We re so sorry to here about your dad. I m sure he would be missed. We love hearing about all your family vacations and missing kids!!!

So sorry Julia. I know your dad was a big part of who you are and the accomplishments you have made. I know you will honor his legacy with your beautiful family. It’s so hard to let them go for now but you will meet again. Take care my friend.

So sorry to hear of your father’s passing. Sounds like he had a wonderful, full life. What a blessing to your family and to those who had the pleasure of knowing him. God bless you all.

I met Thor soon after I graduated from college and moved to Kansas City to work for an architectural firm.

While I only had contact with Thor for a few years, during that time, usually over lunch with my then boss, I got to know him as a calm, peaceful, and respectful gentleman. The things I learned from him have benefited me in both a professional and personal nature.

My thoughts go out to Martha and the rest of his family.
Ron