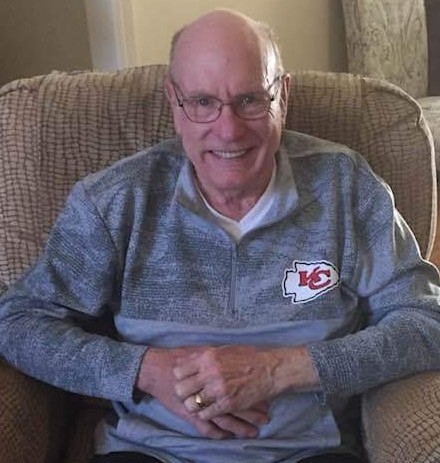 Harold Bruce Pressly, age 86, of Lee’s Summit, MO passed away peacefully on Friday, April 29, 2022 with his caring wife of 66 years, Mary by his side. The family has comfort in knowing he has gone to be with his Lord and Savior after several years of declining health due to dementia.

Bruce was born February 13, 1936 to Frank Harold Pressly and Ruth Lippus Pressly in Independence, MO. He and his family moved to small farm just south of Belton, MO at the age of 5 where he was raised as the youngest of 2 children. At Belton High School, Bruce was a member of the National Honor Society, Senior Class President, played football on Belton’s undefeated football team of 1953 and met his lifelong sweetheart, MaryJo Herndon. They graduated from Belton High School in 1954 and were married on June 12, 1955. He attended the Missouri School of Mines and Metallurgy in Rolla, MO and graduated in 1958 with a B.S. degree in Metallurgical Engineering.

After college, Bruce and Mary returned to the family farm near Belton, MO and started a family of their own. Bruce began what became a 38-year career serving the National Security interests of the United States as a Metallurgical Engineer in the Materials Engineering organization at Bendix / AlliedSignal / Honeywell Federal Manufacturing and Technologies. He was member of the American Society of Metals and highly regarded by his peers as an expert in welding metallurgy of dissimilar stainless steels. He also served his community as an officer in the Jaycees and led an effort to build the main Shelter house at the old Belton City Park. He served his church as a Deacon and as Building Committee Chairman during the construction of the then, new First Baptist Church of Belton.

He was the finest example of a kind person, a friend, a man, an engineer, a son, a brother, a husband, a father, an uncle, a father-in-law, a grandfather and great-grandfather anyone could be blessed with. His hobbies included farming, home improvements, carpentry, woodworking, landscaping, silverware crafting, Sudoku and photo puzzles. Bruce was hard-working and a perfectionist. He was the ultimate do-it-yourselfer and found great enjoyment helping his family and friends on countless projects remodeling, repairing, repurposing, and re-utilizing all things. He was strong, insightful, highly resourceful and wasted nothing.

A visitation will be held for family and friends from 9:30 AM to 11:30 AM, Wednesday, May 4, 2022 at the Langsford Funeral Home in Lee’s Summit, MO. A graveside service will follow at 12:30 PM. at the Belton Cemetery. Memorial donations may be made in his honor to the American Cancer Society, the Lung Cancer Research Foundation, and the Kansas City Hospice Foundation.

It’s difficult to find the right words to describe the importance of Mr. Pressly’s presence in my life during my early teen years after having moved to Belton in late 1972. It was obvious to me that he was the living example of what a caring husband, father, friend, and mentor should look like. Mr. Pressly treated me as if I were an adult from the time of our first meeting, and I will always appreciate him for that. I have too many great memories to describe here, but let it be known that there has never been another man quite like Mr. Harold Bruce Pressly. May you rest in Heavenly peace.

Condolences and prayers to the family. Bruce was an honorable man and a great coworker. He was an example of a Godly man!

My deepest sympathy to the Pressly family for the passing of Bruce. Having been an employee of Bendix/Allied Signal/Honeywell myself, I was familiar with Bruce’s kind nature and brilliant expertise in his field. His son, Bob, is a positive reflection of Bruce’s ability how to raise children. May he rest in peace.

Bruce took me under his wing and mentored me as a young Naive Newbie Bendix Engineer. His guidance and friendship changed my life for the better. Bruce made this world a better place and will be missed. Wishing you peace, comfort, and lots of love at this time of sorrow.

May our Lord comfort you all during this time.

Rest in peace my Belton family

To the entire Pressly family,
The greatest generation. What amazing people who led our baby boom generation. Bruce and Mary such pillars of our community.
Bruce you will be sorely missed. Such an example to everyone. Thinking of you, and lifting you up in prayer, as you manage through this difficult time.
With love and sympathy,
Kathy

I thoroughly enjoyed working with Bruce in Materials Engineering. We had a common love for pumpkin pie in the cafeteria.
He always had a ready smile and was very helpful in sharing his knowledge and advice.
My condolences to the entire family for your loss.

Dear Bob and Family,
May God wrap His loving arms around you all and grant you strength and peace during this sad time and bless you with many happy memories of your precious husband, Dad and Grandpa. You are in our thoughts and prayers.
Love and prayers from Steve and Jackie Hoener

My thoughts are with you. I have so many fond thoughts of Uncle Bruce. As a young child I was always so afraid of him. And I couldn’t believe how much black pepper he would put on his potato soup. But, as I knew him when I became an adult, I realized he was actually an incredibly nice and fun loving person with an incredible laugh. And, I too enjoy a lot of black pepper on potato soup.
Peace be with you. Love, Stan

Sending our condolences and love to the Pressly family. We had never met Bruce, but it sounds like he was a well-loved man, by many people. We send our love and hugs, and hope you find comfort & peace at the time.

Our thoughts are with you during this time. Take care. Marc and Marianne Sportsman