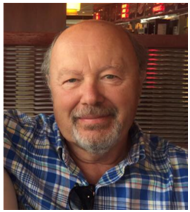 Air Force SMSgt (retired) Harold D. Newton, Sr. (Hal), passed away unexpectedly Sunday, May 19, 2019.  He collapsed while walking his dog, Gus, in the park.  Although the suddenness of his passing is heartbreaking for our family, we know he would have been miserable being a patient had we lost him to a long illness.  We will miss him painfully, but we are comforted knowing he had one heck of a good life.

He loved traveling and has explored the world his entire adult life.  He leaves behind his wife and globe-trotting partner of 49 years, Susan Young Newton and his 3 children, all of whom followed him into the Air Force: SMSgt (retired) Harold Newton, Jr (wife Melanie), Nikki Newton, and Major Stephanie Proellochs (husband MSgt (retired) John).  He is Papa to six grandkids: Alyssa, Matt, Madison, Noah, J.P, and Emma, and three great grandkids: Nissa, Izaiah, and Eva.  He also leaves behind a ton of family who will miss him like crazy and friends who were like family from all over the world.

Hal was born in Kansas City, MO, December 1951, the second of three sons, to Katherine Conn Newton and Kenneth E. Newton, Sr.   All three Newton sons served in the U.S. Armed Forces; Kenneth, Jr. in the Navy, Hal in the Air Force, and Willis in the Marines.  Hal had an exemplary 25 year Air Force career, retiring in February 1996.  He worked in the armaments career field on the A-10, B-52 and for the (now unclassified) Tacit Rainbow project and was stationed in England (three times), California (twice), Korea, and New York.  A huge proponent of education, while on active duty, he earned his Bachelor of Science Degree and Master of Science Degree in Logistics Engineering Management from Southern Illinois University at Carbondale.  After his retirement from the AF, he worked for the Department of Homeland Security from which he retired in 2014.  Hal was an aviation enthusiast, earning his private pilot’s license in 1996 and building his own plane, which has been almost complete for nearly ten years.

Hal’s legacy is his love of country, his curiosity and love of exploring, his kindness and willingness to do anything for anybody, his ability to fix anything, and his legendary detailed…very detailed…way of giving directions.  He is so loved and will be so greatly missed.

A Memorial Service for Hal will be held at Langsford Funeral Home, Lees Summit, MO, at 11:00 on Saturday, 25 May 2019. A visitation will be held the hour prior. Contributions may be made to the Wounded Warrior Project or the Sarcoma Foundation.

Susan and family, I am so sorry for Harold’s passing. But bless his heart, he did it the way he wanted. Like you said he didnt want to be a patient. You will be in my prayers.

My condolences to Susan and family. I’m very grateful to have met Harold. He will be deeply missed.

I remember Mr Newton being an awesome man to be around. Growing up with Duke,Nikki, and Stephanie. I was always at the Newton’s house. Stay safe and strong. Love and prayers.

God’s Grace and comfort to your family and friends. Prayers are happening now.

We were absolutely stunned and saddened to hear this terrible news. It’s surprising and depressing to be reminded that we are all mortal, but it is sadly true. Hal was a bright light in any setting. We remember him as quiet and thoughtful, courteous to a fault, and determined to do the right thing in any situation. We enjoyed the years we spent working (Ron) and raising kids (Nancy) together, and we’ll hold dear the memories of our lives spent in both those endeavors at Edwards. We hope in time that you find the strength to bear the loss and sorrow of Hal’s passing.

Our hearts go out to you. We were so sorry to hear of your loss. Harold was an amazing father, husband, friend. We feel fortunate for the times we spent with him and the family…leaving us with fond memories to cherish forever.
God bless your family in this difficult time. We love you.
Pat and Bev

We have lost a dear friend and send all our love and condolences to you all. Cathy, Dezzy & Mary join us in remembering how fun and unique Harold was and I know Dez would have stories to tell! All our ❤️ love.

Bob and I wish to send our condolences. So sorry for the families loss of someone so very dear. You are all in our thoughts and prayers during your time of sorrow. Bless you all.
Sincerely,
Robert and Estelle Conn

Dear Susan, Duke, Nicole, Stephanie and all family members, We are so very sorry and shocked to hear about Harold. One of God’s blessings is to take someone quickly. Unfortunately it leaves the ones behind sad that they couldn’t say good-bye or one more I Love You. Trust me Harold knew how much you all loved him and enjoyed time spent with him. Just know your whole family is in mine and Jeff’s prayers. God Bless????

Oh darlings, I am so sorry for your loss. I wish I had known him better, but have fond memories of sitting around the kitchen table in Thompson at Verlie’ s memorial gathering. He sounds like a wonderful human, which he would have to be to keep Susan his wife happy for 49 years. Love, peace and blessings to you all at this difficult time. May God hold you tight and send you signs of Harold’s light. When our mom passes and Karen and I went to Ireland, we found white feathers every where and continued for a few years. We still get an occasional feather, just so we know she’s here. And I know Harold is here too. Love you guys.

What a shock and our condolences to you sue and all your kids and family .
Let us know if we can do anything for you

Dear Susan and ALL the Newton family,

We are so sadden at the loss of Harold and our hearts go out to you all. Please know we too speak of your family and what you have meant to us …… and of course the bike will be treasured for life! It is with deep regret we cannot be there to honor Harold but please know we are there in our hearts and will be thinking of you all. Please when the time is right for you all the invite is there to come see us in England and let us remember the times and laughs together ❤️ With our deepest sympathies Mark and Cheryl Brotherton xxoxoxx

We are blessed to know Stephanie and family who are the sweetest and kindest family you will ever know! She always spoke so highly of her Dad & Mom. Therefore we all felt as we knew them too!
Our sincerest condolences are with you and much love!

He was always one of my heroes. A gentle giant. My prayers to his family and friends!

Our deepest condolences go out to all the family.

Our thoughts and prayers are with your family during this difficult time. May you find comfort in remembering the loving memories of your loved one for he will forever remain in your heart and memories. Blessings to you all ❤?

To the NEWTON‘s I have a heartfelt message. From what I remember Mr. Newton was a very nice caring man who loved his family with the deepest of hearts. Watching him be a great dad to his kids… And be gentle honest man with his wife… I pray for the Newton family today…
With my deepest condolences

I’m so sorry to hear about Hal’s passing. My thoughts and prayers are with you and your family.

I see mr. Newton as a role model of a man and the way a man should act he was always very thoughtful and kind to me when I came into his home with always a good story I miss him and love to all his family

Bill and I have fond memories of the few times we spent with Harold and were so sad to hear of his passing. He was such a sweet man. Sending many prayers and a ton of love and light to all of you now and always.

Susan and all,
I am so very sorry to learn of Harolds death. I send you outstretched love and understanding. Too much death has visited us all recently, and it is not easy. But maybe even more stunning when sudden. Heartfelt sympathy.
Lyn

Susan and family I am so sorry about Harold. I am sending prayers for God’s grace and peace for you and the family

Susan and Family
I was saddened to hear of Harold’s passing. Please except my heart felt condolences.
When you and Harold were visiting your Aunt Lee and Uncle Don (some years back) was the first time I had the pleasure of meeting , sitting down, and talking with Harold , and I was left with fond memories. Harold was a man of service to our country for many years,
I as well as many others are grateful for this.
Please know that my heart, thoughts and prayers are with you, family and Harold.
Harold Dean Newton may you forever Rest In Peace.
Cousin Dennis

Our hearts and prayers go out to all of you. We love you and wish we could be there in person. Harold was a wonderful man. His accomplishments are many but I know his greatest pride was his family. You are his true legacy and gift to the world. He lives on in you and I know he is smiling!!! Prayers and love. Shirley

So very sorry to hear about Hal. I just this very day found out about the services for Hal. I regret not being there to salute my friend. Hal and I worked side by side at the cave in Lee’s Summit. I worked as security officer and Hal was logistics officer. Together we fought management on almost a daily basis! Like Hal, I also was in the Air Force and served as a sergeant E-5 in Vietnam. Hal and I shared more laughs together than I can relate. He was my friend and I will think of him often.

Our deepest sympathies to the whol family. You are in our thoughts and ptayers

Hal was my supervisor when he retired, but I first met him at Barleys Bar and Grill in Lee’s Summit. The hangout for watching Chiefs games. My condolences. May his memory be a blessing.

Hal was my supervisor when he retired, but I first met him at Barleys Bar and Grill in Lee’s Summit. The hangout for watching Chiefs games. My condolences. May his memory be a blessing.

Susan, So sad to hear of Harold’s passing. Though our families were close for years, we didn’t spend much time in our “adult” years. The one thing I always remember thinking after each of our short visits is how great a husband he was for you. You and he had the kind of relationship your parents had; incredible.

Susan & family
May the peace of God comfort you. I am Deanna’s older sister.