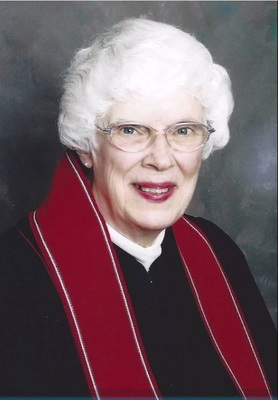 Harriet Anne Buttry was born to Frank and Francena Arnold December 1, 1926 in Downer’s Grove, Illinois. She grew up in a strong Christian family during the Depression. She attended Wheaton College where she met her husband, Lucas Wayne Buttry. They were married on June 24, 1950. They had four children, Dan, Steve, Don and Carol. Luke was led by the Lord to become a Chaplain in the U.S. Air Force and Harriet to become a chaplain’s wife. They lived in many states, England and Japan. When they retired from the Air Force in 1970, the family moved to Shenandoah, Iowa, where they pastored for 5 1/2 years at First Baptist Church and then moved to Kankakee, Illinois. After Luke’s death in 1978, Harriet moved to Clarinda, Iowa for a year and then attended Northern Baptist Theological Seminary in Lombard, Illinois. She pastored First Baptist Church of Sheboygan, Wisconsin and then joined the staff of NBTS from which she retired. In retirement she moved to John Knox Village in Lee’s Summit, Missouri. She served as an interim pastor in churches in Wisconsin, Illinois, Iowa, Missouri and Kansas. Harriet had a love for music and a gift in writing, following in her mother’s footsteps. She enjoyed playing board games and was especially known for her competitive games of Scrabble. Harriet had a passion for traveling and completed her goal of seeing all 50 states. With each addition of her grandchildren and great grandchildren she beamed with pride, sharing about them with all she met. She was preceded in death by her husband, Luke; parents, Frank and Francena Arnold; brother, Frank; sister, Helen; son, Stephen; grandsons, Patrick Devlin and Brandon Buttry; and great grandson, Keaton Poulter. She is survived by her son, Daniel and his wife, Sharon (Crader) Buttry; her late-son Stephen’s wife, Mimi Johnson Buttry; son, Donald and his wife, Pamela (Albright) Buttry; daughter, Carol (Buttry) and her husband, John Devlin; 24 grandchildren; 21 great grand-children; and her sister, Shirley (Arnold) and her husband, Robert Worgul. Funeral services will be on Friday, March 2, 2018 at First Baptist Church of Kansas City at 1pm. Visitation will be one hour prior. Burial will be Saturday, March 3, 2018 at Rose Hill Cemetery in Shenandoah, Iowa at 10am. A memorial service will follow at 11am at the First Baptist Church in Shenandoah, 411, W. Clarinda Ave. In lieu of flowers, memorial donations may be sent to: Northern Seminary, Harriet Buttry Endowed Scholarship Fund, 410 Warrenville Road, Suite 300, Lisle, IL 60532.

Soo sorry for your loss Don and family. 91 years of service to God and country shows how impactful her life on earth was to others. God bless you in your time of loss and Heaven’s gain.

Don, Pam, and Family…..Just now seeing this and my heart goes out to you. Remember the laughter, remember the smiles, and remember all you shared. Your mother certainly was an inspiration and leaving her footprints! May God’s love surround you just as it does the one who has gone home to him. Heaven has welcomed a very special person and may he comfort you in your sorrow. As you have told me, “I’m as close as the phone” and willing to help you any way I can at this time. I will be in touch. Love, Kathy Ketcham, Kristi,Nicki, Dusti, Mandi, and families

My condolences to the Buttry family. While I didn’t have the privilege of knowing Harriet, she sounds like a remarkable person! Her character and faith are surely reflected in the lives of her children. May memories of love, laughter, and a long life lived well bring comfort in this time of mourning.

May God comfort Harriet’s family and friends in this time of remembrance with assurance of his loving care and presence as you mourn her passing and celebrate her life, ministry, and change of address.

Harriet was a such a blessing. My heartfelt prayers for you all in your grief and sacred joy in the celebration of a life well lived. Peace and God Bless You.