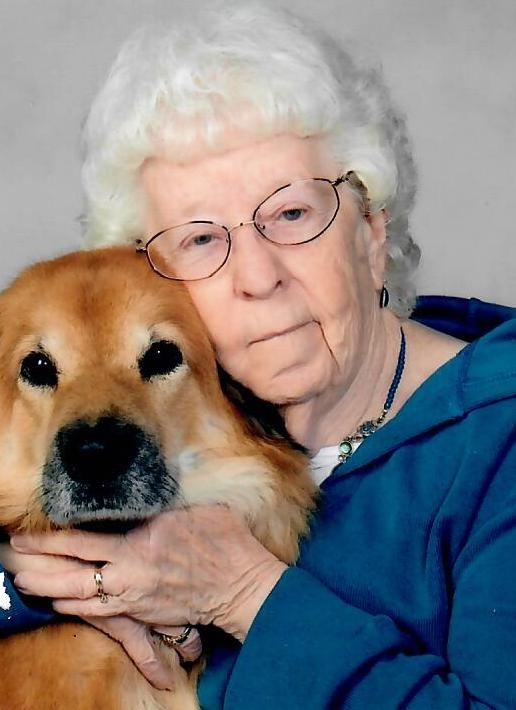 Helen Carlene (Coen) Tate, 97, of Grandview, MO. passed away March 22, 2022 peacefully at her home after a long illness. Funeral services will be 2:00 PM, Monday, April 4, 2022 at Langsford Funeral Home with a visitation starting at 1:00 PM. Burial in Lee’s Summit Historical Cemetery, Lee’s Summit, MO. Memorial Contributions may be made to Wayside Waifs, American Heart Association, Grandview Assistance Program or charity of your choice.

Helen was born May 22, 1924 in Garden City, Kansas. She was the youngest daughter of Peggy E. (Martin) and Carl B. Coen. She lived in Garden City, KS until the family moved to Monet, MO and finally Houston, MO where she met her future husband and high school sweetheart Wesley Ray Tate. They married on March 1, 1943. Helen loved baking, sewing, crocheting and traveling to visit family and friends around the country.

She was a huge Kansas City Royals fan dressing in fan gear almost everyday of baseball season. After her kids where all in school she worked as assistant cafeteria Manger for Consolidated Dist. #4 in Grandview from 1964 – 1986 doing the baking for Conn West then Meadowmere Elementary making hot rolls, cinnamon rolls, cookies and cakes for the students and staff. At home she was always baking for family and friends as well.

Aunt Carlene, (sister to my Mom, Jo Ann Romies) what treasure she has been. She loved company and baking favorite pies, cookies, cakes, etc. She made us always welcome in their home, and later her home. She loved her little doggies. At her brother’s 90th birthday party she was the shortest person in attendance but she was a star of the party as well as her younger brother. Carl Coen. We all loved her.

I worked at Grandview High School in the Cafeteria. I knew Carlene well, and was well aware of her baking abilities. She and Rosie were such a team. She was always friendly, and I really liked her. I’m so sorry to hear of her passing.

We loved Carlene as our friend and relative. It is with so much sadness we lose her but know she is with all her loved ones who went before her. Our thoughts are with all the loved ones she leaves behind.