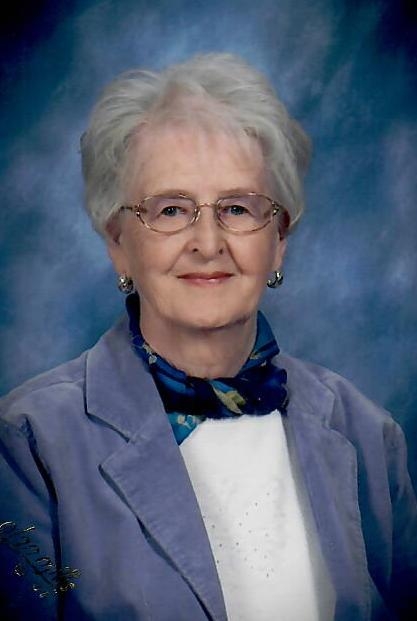 Helen was born in Wenatchee, Washington of February 8, 1928. She was one of six children of Willis and Ethel Stewart and lived her entire childhood in Washington. Over the years, she shared many stories with her children and grandchildren about living during the depression, and working in the apple orchards, picking and packing apples at a young age.

After high school, Helen moved to Kansas City Missouri to attend school at TWA, studying to become an airline stewardess. But as fate would have it, she met the love of her life, Wayne Olson, and they were married on April 2, 1951. Helen and Wayne were a match made in heaven, and they worked side by side throughout life, until Wayne’s passing in 1991.

Helen was a stay-at-home mom until her two children, Phillip and Debi were in 8th and 6th grades in 1966. She then went to work “part time” to earn money to buy material to make new curtains for their living room. She ended up working at Luzier Cosmetics Co., in KCMO until 1984 when she retired after 20 years and began taking care of her granddaughter, Jessica, while her parents were working. She also took care of her youngest grandchild, Melanie, until she started school. Even after the girls were in school, grandma was a close companion. She bought the house right behind Debi and Robert and stepping stones and a gate were put in to allow easy access back and forth.

Helen loved her family so much. She was always there for them as their number 1 cheerleader, coach, spiritual guide, wife, mom, grandma and great grandma (Gigi). Helen was an active member of her church, Lee’s Summit Community of Christ. She was part of the Doughraisers team, making breads and rolls to sell as a fund raiser for the church. She taught Sunday School and was a Vacation Bible School teacher.

Always up for adventure, Helen entertained her grandchildren by taking them on many outdoor activities. They often went to James A. Reed wildlife to hike and look at nature. When she had a Winnebago camper, she took them camping at various places such as Blue Springs Campground and Watkins Mill State Park. Helen and her dear friend, Hazel Davenport, went on many adventures together in their RV’s. She also loved to travel and went on several tour bus trips with her friends to Nova Scotia, New York City, Branson, Prince Edward Island, and others.

Helen had a strong faith in God. She shared that belief with her family and her friends. Even though she had many curves thrown at her, she knew that God was with her and watching over her. She passed this strong faith to her children and on to her grandchildren and greats.

As she now joins God in Heaven, she will reunite with her beloved Wayne, her son, Phillip, and many other family members. She leaves here on Earth to carry on, her daughter Debi Harding and son in law, Robert, her daughter in law, Tillie Steffen and husband, Joe; 5 grandchildren, Heather Olson, TJ Olson, Travis Olson (Kacie); Jessica Stewart (Aaron), and Melanie Harding (Megan); and 5 great grandchildren, Tyler Olson, Kali Olson, Tommy Olson, Jaxon Stewart and Olson Harding.

Rest in peace Mom, Grandma, Gigi. We love you always, and we know we will be with you again!

In lieu of flowers donations may be made to the Alzheimer’s Association, Coldwater of Lee’s Summit, or Lee’s Summit Community of Christ.

Debi and Family, My sincere condolences to you all. Helen was such a sweet lady and I have very fond memories of her.

To Debi and Family,
Sorry to hear about Helens passing. We are thinking of you during this time of sorrow.
Monte, Jody and Emily Stull

We are sorry to hear of aunt Helen’s passing. She was such a sweet & fun person. We will miss her, but she is in a better place & reunited with all her siblings & other loved ones. Our thoughts & prayers are with you & your family.

Dear Debi and Family,
So sorry to hear of our dear Aunt Helen’s passing (but enjoyed reading this wonderful obituary tribute). She was a gem and well loved by our whole family. Please accept our sincere condolences. – Cami