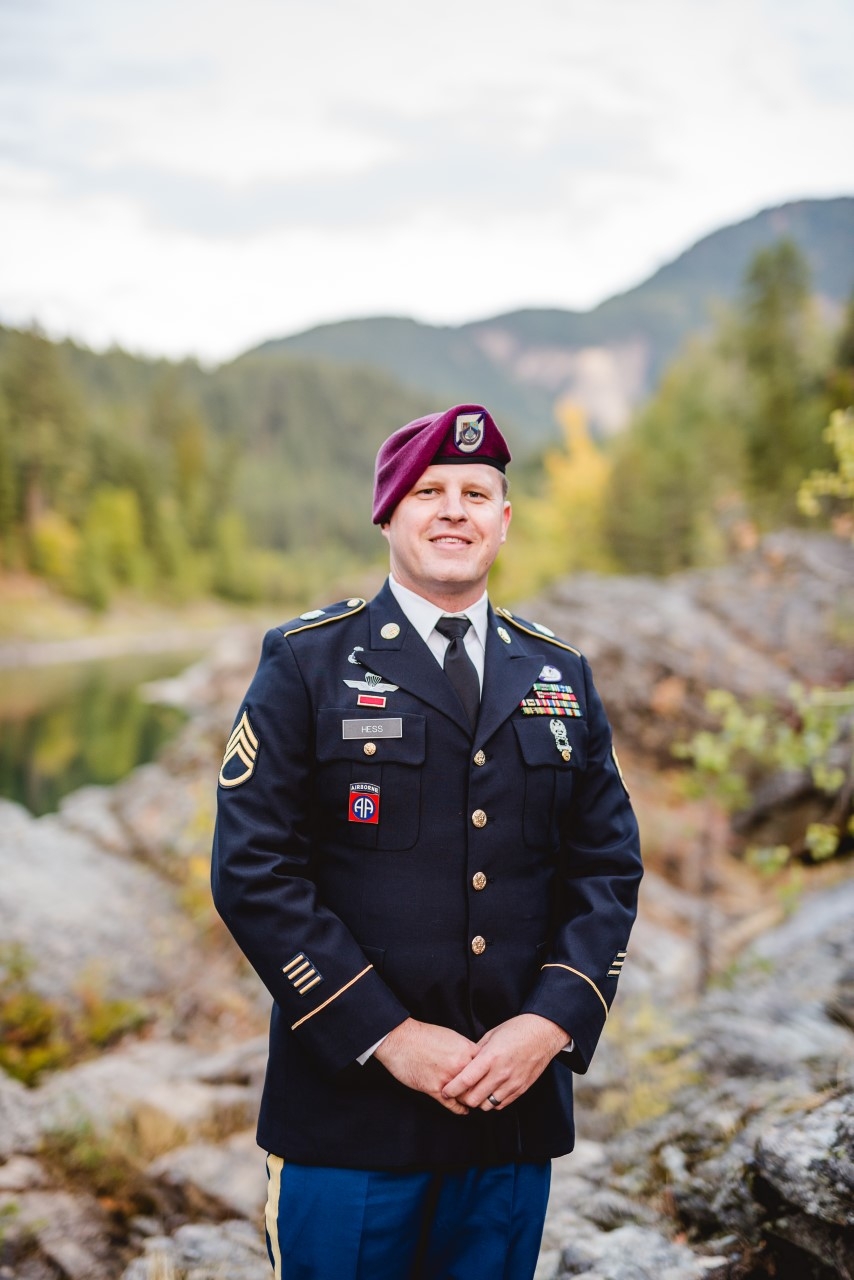 Staff Sergeant Jacob Alan Hess, age 34, died May 15, 2019 at Fort Polk, Louisiana while on active duty during a military training exercise. Jacob was born in Shawnee Mission, Kansas on May 20, 1984 to Ross and Carol Hess. Jacob married his soulmate Jessica on September 21, 2017. Jacob lived life with a deep compassion for others, an unrivaled sense of duty and dedication, and an amazing sense of humor. He saw himself first and foremost as a husband and a father. His wife and his kids cherish all of their special moments and memories, including a few unforgettable April Fools pranks and playing silly songs on the ukulele.

His military family will remember Jacob for his reliability, witty one-liners, and a ‘just get it done’ approach to any task. Jacob certainly ‘got a lot done’ throughout his service, joining the Army in 2004. He completed Airborne School in 2006. He served in the 82nd Airborne Division at Fort Bragg as an engineer and deployed in support of Operation Iraqi Freedom in 2007-2008 and again in 2009-2010. Jacob completed a qualification course and reclassified to Civil Affairs in 2013 and served with the 97th Civil Affairs Battalion, 95th Civil Affairs Brigade, 1st Special Forces Group, United States Army Special Operations Command (USASOC).

Jacob’s professional accomplishments are impressive however, he was always most proud of the way he lived his life out of uniform. Jacob made his wife and daughters the focal point of his life. Jacob also had many hobbies including playing ukulele, working on home improvement projects, making stained glass pieces, scuba diving, and painting. He was also an avid Kansas City Chiefs and Royals fan.

Jacob is survived by the love of his life, his wife Jessica, and five daughters, Crystin, Zoey, Elizabeth, Caroline, and his newborn baby girl, Everest. He is also survived by his parents, Ross and Carol Hess of Grandview, a sister Ashley Hess of Grandview, grandparents Ronald and Peggy Hess of Grandview, Shirley Andersen of Edwardsville, KS, several aunts, uncles, cousins, and countless friends. He was preceded in death by a sister, Crystin.

Visitation will take place at Langsford Funeral Home in Lee’s Summit, MO on Friday, May 24, 2019 from 9-11am. Funeral services will be at 11:00 am at the funeral home. Burial will immediately follow at Crescent Hill Cemetery in Adrian, Missouri with full military honors.

I just want to express how sorry I was to hear the news. While I haven’t met Jake I have heard so much from his grandpa Hess, who was very proud of his grandson. My thoughts and prayers are with the whole family during this time.