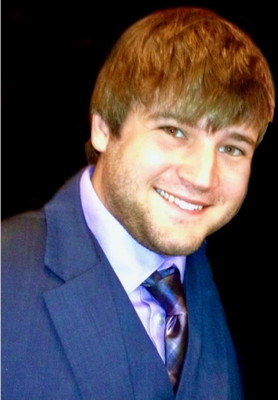 It is with great sadness that the family of Jacob Ryan Skowronski announces his passing after his life was taken from him on Sunday February 4, 2018 at the age of 25. Jacob was born on February 10, 1992 and grew up in Lee’s Summit, Missouri. Jacob was a 2010 graduate of Lee’s Summit West High School with many honors and achievements, and continued his education at the University of Missouri while also working at the MU Research Reactor. He was an avid reader, a lifelong learner, and passionate about math, science, debate, and nature. He enjoyed playing many sports growing up, but his passion was music—playing, writing, and creating music of all genres. Jacob had many interests and special gifts, but above all he appreciated the beauty in everything, and was filled with extraordinary kindness and compassion for his family and friends. He will be forever remembered by his parents John and Michele (LeValley)Skowronski, his sister Heather (Chris) Taylor, grandparents John Skowronski, Diane LeValley, and Richard LeValley. Aunts and Uncles Jacquie (Chris) Clark, Kirk (Angela) LeValley, Sheri (Rick) Nichols, and Kristy (Chad) Surratt. He will also be forever remembered by numerous loving cousins, nieces, and nephew. Leila, Stella, and Harrison Taylor, Josh and Justin Clark, Chris LeValley, Kayla Hamline, Ricky, Maegan, Blake, Ryan, Kingston, and Khloe Nichols, Joey, Alexa, and Jackson Surratt. He is preceded in death by his grandmother Elaine Skowronski. Visitation is scheduled for Tuesday February 13th 11:30am at The Summit Church/Lee’s Summit United Methodist (Downtown Campus) at 114 SE Douglas St. Lee’s Summit, MO 64063, with services to follow at 1:00pm. In lieu of flowers, donations to the National Alliance on Mental Illness (NAMI) at PO Box 62596 Baltimore, MD 21264-2596 or by phone at (888)999-6264 are greatly appreciated.

I am truly sorry for the loss and pain the John and Michele Skowronski family and friends are feeling because of losing Jacob recently in death, way too soon. Most of us have had to endure the sorrow of losing a loved one in death. What helped me the most was prayer and faith in God’s promises like 1 Corinthians 15:26 tells us: “And the last enemy death, is to be brought to nothing.” God’s kingdom that Jesus taught us to pray for at Matt:6:9, 10 will bring about these wonderful promises, including the resurrection. None of us are guaranteed tomorrow, but we are all guaranteed a resurrection.(John 5:28, John 6:40, John 11;23-25). God invites you to throw all your burdens on him and he will sustain you in your time of grief. Again, the family is in my prayers and I offer my heartfelt condolences.

John and Michelle, Words can not express the sadness that we feel about the passing of Jacob. Your are in our hearts and prayers. Mark and Shelly Storey

So sorry to hear this tragic news, John and Michelle. Our thoughts and prayers are with you and your family. Jacob was a very kind young man.

We are so saddened and VERY upset to hear about JACOB, your beloved son. This is such a shock and a devastation to every Mom, Dad and Family Member. We can’t even imagine your pain and when we try, it hurts so much! We will remember JACOB’S wonderful smile and Vibrant personality! JACOB will always LIVE in our Hearts and Memories! Please let us know if there is anything we can do for you guys and we are definitely praying for you and you are not alone we are with you! LOVE from all the Madison Family

So sorry to hear about Jacob. My thoughts and prayers are with you and your family

I am so very saddened to hear of the loss of Jacob. I will always remember his big smile and sweet, sweet spirit. Know that your family will continue to be held close in thought and prayer.

Michele and John, I am so sorry for your loss. I can’t begin to imagine the pain you are feeling right now, but please know that you and your whole family are in my thoughts and prayers.

I am so incredibly sorry for your loss. Losing a child has to be one of worst experiences anyone can go through ever in life, it is most certainly the hardest when they are taken from us so tragically. The thought is unbearable. Although I never had the opportunity to meet Jacob, I can tell from his picture that he was very handsome and looked happy. I have no doubt he was a wonderful person. It is an enormous grief that he has left us at such a youthful age. While I do not think anyone can ever be the same after an event like this, I pray that the outpouring of sympathy, the kind acts of friends and strangers and the comfort in knowing that your loss is felt by so many, will help you through this difficult time.

My prayers are with you and your family during this difficult time. I’m so sorry for your loss.

My heartfelt sympathy to your family. Jacob played with my son on the LS Parks & Rec baseball league for several years when they were teens and graduated in the same class at LSWest. God’s peace and comfort to your family.

I am so sorry for your loss. Words cannot express my deepest sympathies for your family. May justice be done for him.

Diane,John and Michele & Family, There comes comes a time when we must weep, it means that we have loved. Remembering you with special thoughts and prayers during this time. May your precious memories of Jacob comfort and carry you and yours. Compassion is your pain we feel in our hearts. Peace be with you, A.J., Neysa Kurle & Family

Michele and John, I’m at a loss to find the right words to express how sorry I am for the tragic loss of Jacob. This must be so painful. Please know that both of you and your entire family are in my thoughts at this difficult time. I did not know Jacob but from all that I’ve been reading here he sounds like a great son and amazing person. My condolences.

We are so sorry to hear about the tragedy in the Skowronski family.

John, I am so sorry to read this. My heart is heavy for you and the family. I will keep all of you in my prayers. Peace be with you.

jake… I don’t know where to begin man. you were one of the most sincear and kind friends I’ve ever had. you were always so honest and real all the time. I remeber the first time we met we hung out for 2 weeks straight. you were so easy to get along with. I saw you last in January and it was such a warm memory. just hanging out playing video games together eating chips. those simple pleasures, those relaxed moments with you were moments I’ll cherish and never forget. I remeber the day we went to Kansas City together, you wanted to help me make a music video. you walked into an old building and struck up a friendly conversation with the owner and just with your kind and gentle essence he gave us free rein to explore the whole building and film whatever we wanted. I’ve never seen someone so warm and inviting be able to just work that kind of magic. there was just something about you jake that made a person feel safe and happy. I can’t stress enough how different you were. maybe the world just didn’t deserve you man. I don’t know why these things happen but this will never stop hurting. I’ve been trying to get ahold of you for like 2 months now or something, and to find out this happened I can’t even process this. for anyone who wants to see the video me and jake made, it’s here.. https://youtu.be/05GYN2ukTjc love you jake. miss you forever man..

Lovingly thinking of you all. The Oestreich’s

In memory of Jacob Ryan Skowronski

We are so sorry for your loss. Our thoughts are with you and your family during these difficult times.

Dear John, Michelle, Heather, Chris and families, We are so sorry for your loss. There are no words to express our sympathy. We hope you can find peace knowing that you are wrapped in prayer. Our deepest sympathy, The Cantu’s, Stevenson’s , Flanagan’s, Stovalls, Portman’s and Schreibenhoffers.

We love you all, so very sorry for the loss of Jake. I pray for comfort for you and your family in the days,weeks, and even years to come. If you need anything, we are here.

May your precious memories comfort and carry you thru this difficult time. Peace be with you and yours.

This donation is in memorial to Jacob Skowronski.

For Jacob, may your efforts to heal the Earth live on.

I know Jake loved plants, so we wanted to have some planted in his memory.