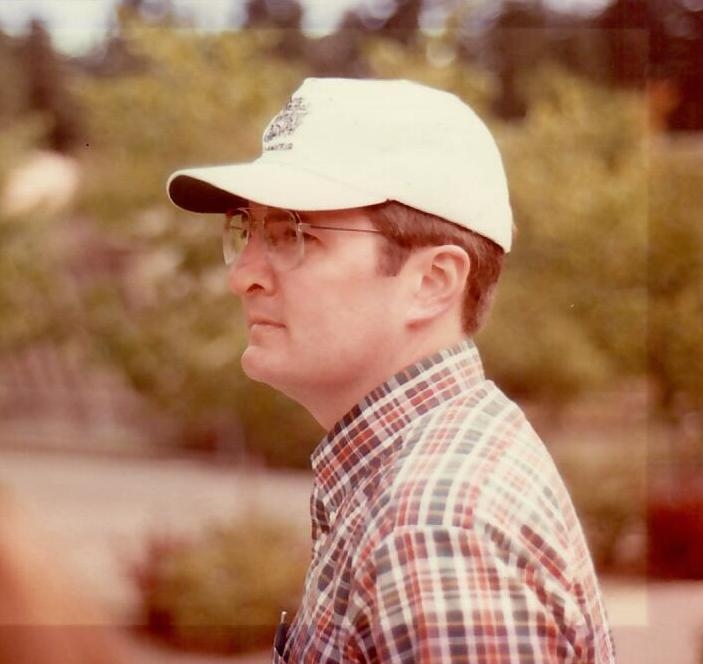 Jim was born March 24, 1949 in Gardner, Kansas. He was married to the girl of his dreams and his best friend, Sharon, for 48 years. Jim grew up in the little town of Gardner, Kansas and spent a lot of time on the farm before moving to Lee’s Summit in 1984. He worked in banking for nearly half a century as a commercial lender and earned an advanced degree from the prestigious Stonier School of Banking from Rutgers University. Banking was his ministry in which he was able to impact many lives and make numerous, life-long friends. Most importantly, he loved the Lord. He was a beloved and faithful husband, father and friend.

He was preceded in death by his father Alva Dean (A.D), his mother Dorothy (Dot), and his brother Steve. Survivors include his wife Sharon, his daughter Kelly, his son Michael and daughter-in-law Valli of Fort Belvoir, VA, and his two grand-daughters Trinity Skye and Zoe Grace.

Jim loved his family with all his heart and he held his friends close to his heart. He wanted us to know and experience the love of our Heavenly FATHER and to know the joy of GOD’S love and be encouraged and strengthened by it. A favorite verse is John 3:16 “For GOD so loved the world that HE gave HIS only begotten SON…” Jim’s love for each of us and the LORD was strong and will not fade. He is seeing THE SAVIOR face to face and seeing again those loved ones who went before.

Thank you all for your love and kindness and prayers.

With love in CHRIST,

Memorial contributions may be made to Hand of Help Orphanage (Romania), Online giving: www.handofhelp.com

My heart aches for your loss. Jim was not only my mentor, but my friend. And he was one of the greatest men I knew. He was always so proud of you and his family, willing to share stories of what was going on in your lives. My thoughts and prayers are with you all. I am comforted in knowing how strong his faith was and that he is home.

Sharon, You are in my prayers as well as your family. We have a Sure Foundation, Jesus Christ, on whom we can stand and One we can lean upon in times like these. I love you and appreciate all you have prayed for me and helped me in difficult times. I love you and am praying with you and your family too. Metta

Sharon and family, I was so sad to hear about Jim’s passing. I was so blessed to have worked for him for several years. I have so many wonderful memories. My thoughts and prayers are with you.

Words cannot express my sadness over the passing of my friend Jim. Jim and I worked together as a team for years at Bannister Bank.
Jim always had a kind and gentle God like spirit. He lived his life to glorify God. My prayers go out to Sharon and family. God Bless

Sharon,
Our hearts go out to you with deepest sympathy.
All our love,
Bob, Beth, Carl and Kipp

My heart just aches at the thought of Jim’s passing. Then, I’m quickly reminded of the reality that for Jim, being absent from the body means that he’s in the presence of his Lord in heaven, who he loved so much! Sharon, Karen and I are covering you, and your family in prayer.

He was a good, good man. He will be missed.

Dear Sharon,
My thoughts and prayers for you and family.
Jim was a wonderful and kind man, and was a true beacon of Jesus Christ. His life example was amazing. I love playing music with him. A very humble yet talented man. Miss him!
Kindest regards,
Terry

Sharon, I worked with Jim at Bannister Bank alongside Sandy, Don, Ann and many others. Jim wasn’t just a co-worker, he was a good friend. Before he retired, we ate lunch together about once a month and that is when he convinced me to buy his dad’s home on Donovan. He was alway in my corner with me and not behind me.

I never thought this day would happen. I know he was one of the “Good Ones” and is in heaven, but we all will miss his voice, his smile and most of all, his friendship. Sharon, I am praying for you, Kelly and Michael in hopes that God will heal the hurt and pain that you are feeling. I will remember Jim for the rest of my life and continue to pray for him as I know he would have for me.

Rest In Peace, old friend! You are already missed!

We are saddened to hear this news. Jim was a FPC and Gardner Elementary through High School friend. He and I went to Tarkio College our freshman year. My boyfriend, Jim Anderson, came for a week-end and he stayed in Jim’s (M.) dorm room. Jim Moore’s dorm roommate… Bill Claassen, came from Newton, KS, where we have now lived 38 years. In the more recent history, I’ve seen Bill a few times and Jim just briefly at his mother’s memorial. His tribute was very nice and a wonderful testament to his faith.
Well done good and faithful servant, Jim Moore.

This was a good man. He was someone who lead by example and loved the Lord. He will truly be missed, but will always have him in my heart and will see him again in heaven.

Sharon and family,
We’re deeply saddened to hear of Jim’s passing. We love you guys and enjoyed our fellowship with you! Jim was one of Billy’s bass guitar heroes! He will be missed here but is playing directly in the presence of his Lord and Savior now! Praying for your peace and comfort! Looking forward to our grand reunion!!
Love you,
Billy and Elaine Mayor

Dear Mrs. Moore,
My name is John M. Stortecky. I graduated from Gardner High School in 1967 with Jim as a classmate. I wanted to share a few stories with you about what Jim meant to me.

I grew up in Brooklyn, New York. My family lived in the military base housing at Naval Air Station Floyd Bennett Field on Flatbush Avenue, right next to the Marine Parkway Bridge. I attended P.S. 207 and Marine Park Junior High School 278 through the 7th grade. When my father was transferred to Olathe Naval Air Station outside Gardner in 1962, my brother Steve, my sister Joan and I thought we were leaving the United States. We didn’t know anything outside of New York City, and all we knew about Kansas is that is where Dorothy is from. To us it was the land of Oz.
I was coming from a Junior High School of about 2,500 students to Gardner Junior High, population 140? I was immediately accepted into the Gardner school community, and I fell in love with the people of Gardner and the state of Kansas. It is where I became a person and got a life. I was somebody. I have been to every five- year reunion of the class of 1967, and I love all my classmates. I’ll be going to my 55th this year, and I’m looking forward to it.
I needed to give you this background to put the following stories in perspective, and to show you how important Jim was to me in my life.
My first memory of Jim is in 1962, he was out front of the school throwing a football. I didn’t know much about football, but I couldn’t believe how he could throw it with a perfect spiral, and accurately! Little did I know at that time what the future held.
When we entered the 9th grade at the Gardner High, we were both on the freshmen football team. We play our 15 minute games at the half-time of the B squad games.
Jim was the quarter-back, I was a half-back. I ran a dive play, Jim faked a hand- off to me, and I kept running straight up the field. When a turned my head to look back, there was that perfect spiral coming right to me! I caught the pass and ran it in for a touchdown. I should mention that a barely made it into the end zone, because I was wearing sneakers, I couldn’t afford football cleats. That event led to the following story.
Mr. Cramer, Julie Cramer’s father, was at that game. He was the owner of the famous Cramer Chemical sports medicines. He saw what had happened, and he got in contact with me, and invited me to his facility. He had a display of football shoes there, and he told me to pick out what I wanted. I chose a pair of size nine low cuts, no charge to me, and I wore them for all 4 years of playing football at Gardner High.
I sat next to Jim in biology class with Coach Dennis Delay as our teacher. Jim and I shared many laughs during class, and that’s when I really got to know and love him.
When Jim got his Chevy SS and had it built into a semi-race car, one day he drove it out to Tower Ridge where I lived, which was next to the Navy base. He told me to get behind the wheel and drive it, and burn some rubber, which I gladly did! I had never felt such power.
When I graduated in 67, I was already in the Navy (Naval Air), I had gone to boot camp between my Junior and Senior year. I was trained to be a meteorologist in Lakehurst, N.J., and stationed at Seattle Naval Air Station in Washington. While I was there, I could fly as flight crew whenever I wanted, and I would always look to catch a flight to and from Olathe Naval Air Station. In 1968, on one of those trips, I ended up in Gardner for the night with only the uniform I was wearing. It was snowing and cold, and I was desperate. I knew where Jim lived, and I walked to his house late in the night and knocked on the door. Jim invited me in and I slept in Steve’s bed. I will never forget that incredible act of kindness. That is who Jim was.
Mrs. Moore, I may have met you at one of the reunions of the past, but I don’t remember. Over the years I have thought of Jim many times, especially when I would hear anything about Lee’s Summit. I have driven to Kansas many times over the years, and I would always think of Jim.
Jim was the person who inspired me in so many ways. I didn’t know him to have any enemies, and anyone who met him felt special. He was the kind of person we should all always strive to be. He was a leader and a friend. So many, many people are lucky to have known him. To me he was the finest example of what makes Kansas and our country as great as it is. God Bless Jim. The true measure of a man’s success is the number of friends he leaves behind. Most of us can only dream of being that successful. I love you Jim. Thank you for everything.

Jim was such a kind, warm-hearted and loving guy. He was a patient of mine and I will never ever forget his kindness. Since the first day I met him, he impacted my life. What a truly great man.

He loved his family, dearly. Praying for you all and my heart is with you during this time.