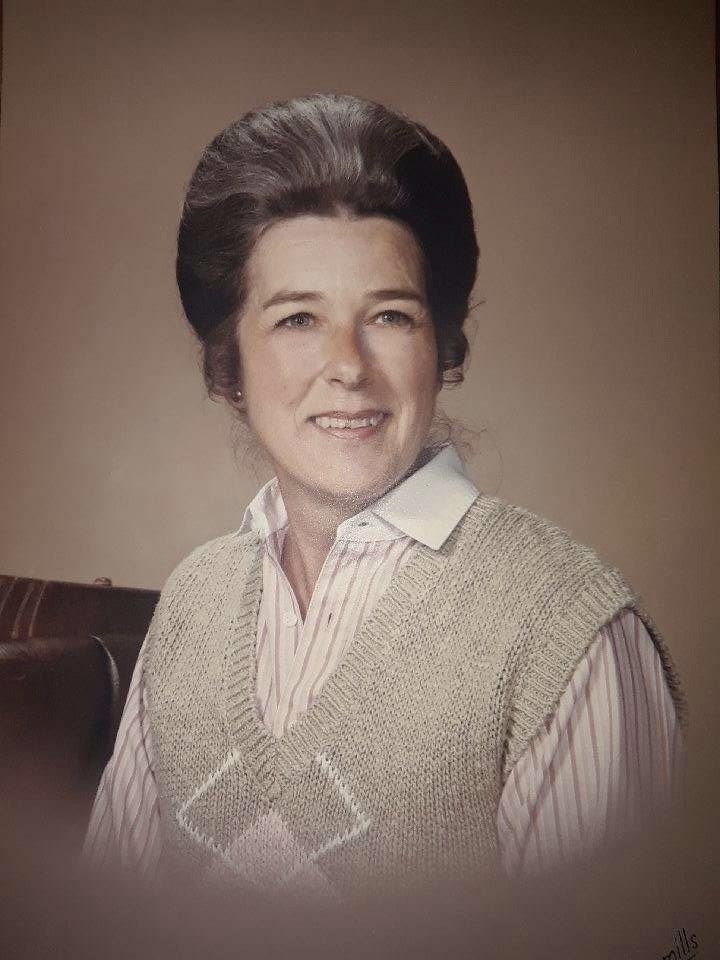 Jane Washburn, 87, relaxed into the arms of Jesus on December 10, 2021 after a long battle with pulmonary fibrosis. She was at home surrounded by her family. Graveside services will be 2:00 PM Wednesday, December 15, 2021 at Walnut Grove Cemetery, 1006 Locust Street, Boonville, Missouri.

Born Emma Jane Warmbrodt, Jane was a farm girl who sometimes wore feed sack dresses to school. She was a high school cheerleader; a successful supervisor for Hallmark Cards; a wife, mother and homemaker; a good neighbor and church volunteer; and finally, a wonderful grandma.

After working on the family farm for most of her early life, Jane married Bob Washburn in 1952 and soon traded her country roots for “life in the big city.” The newlyweds first moved to Parsons Kansas, then to Kansas City, Denver, Chicago, and eventually back to Kansas City for good in 1967. Early in their marriage, Jane made more money than Bob as she proved herself at Hallmark Cards. That changed as Bob’s career took off and kids came along. Jane and Bob recently celebrated their 69th wedding anniversary.

Like many moms, Jane became the primary chauffeur, driving her kids to after-school activities, swim lessons, little league games, summer band, private music lessons, shopping centers, concerts, movies and more. She was involved in PTA and attended all school functions and extracurricular activities. Jane blessed her children by taking them to church weekly from an early age.

Throughout her life, Jane was known to be a great listener to family and friends alike. Keith and Carmen’s friends were always made to feel comfortable and special. Many things she learned on the farm served her well… she was known for her ability to figure things out, including her son’s motorcycles. She bought quality furniture, clothes, etc. but was also thrifty, checking prices carefully and negotiating on large purchases.

Jane was the quintessential domestic queen – organized and immaculate. Love for her children and grandson undoubtedly was the only reason pets were allowed in the Washburn home. Jane helped take care of chameleons and horned toads; a cat named Boots who lived 20 years; and finally, her grandson’s pet iguana, “JB” which she personally raised from a six inch hatchling to a three foot long reptile who loved to perch on her shoulder. The iguana was actually allowed in her spotless bathtub from time to time!

She played the piano beautifully, her most requested piece being Flying Clouds. In the early 70s, she developed and cultivated a love for art, especially Renaissance era art and Thomas Hart Benton. She shared her growing knowledge of art with students in Kansas City schools.

The family wishes to thank the countless neighbors and friends who brought meals, sent cards, and visited during her illness (thank you Kathy!). Donations may be made to the American Lung Association or your local church.

With Jane’s passing, the world lost a woman who was gracious, pleasant, caring, and a wonderful wife and mother. May God sustain Bob and other family members.

I am so sorry to read of Jane’s passing. I knew her from our neighborhood and we
often found each other’s mail in our own boxes.
The embodiment of “Lady”….. she is missed.

Sorry to hear of Jane’s passing. She was such a sweet lady. Take comfort knowing she is now in heaven with no more pain. God Blessings to the family.

So much love to your wonderful family. Jane is a light and will be truly missed.
Many blessings, Tim and Melissa

Saw where Jane passed away. Know she suffered far too long & wanted you to know we are thinking of you in this very sad time.

I’m so sorry to see this news. I have many memories of all the Washburns from many years of friendship. My heart goes out to you and I feel your pain. I will keep you all in my prayers

Sending Much Love to the Washburn family. My prayers are with you.

Very sorry for your loss.

Loved this obituary — really gave us a sense of who Jane was. So sorry for your loss, Bob!