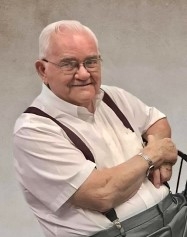 John Dale Wilkerson, 87, passed away peacefully in his sleep at home in the early morning hours of May 24th, 2021. John Dale was born in Rockville, MO on August 19, 1933. He was the third of nine children of John Wilkerson and Ruby Hubbard Wilkerson. He graduated high school from Rich Hill, Missouri in 1951 and then moved to the big city. He was baptized on August 19, 2001 and much appreciated his Christian life and church fellowship. He was a truck driver for several years for Kent Products and then became owner operator of Dale’s Phillips 66 in Independence, Missouri. He was an excellent mechanic and always guaranteed his work. He always said he might not be cheap but he was the best. He loved hunting and fishing and looked forward to deer hunting for many years. He fished right up to the time of his death. He loved playing cards and was always the life of the party. He never knew a stranger and he never got tired of talking to anyone that would listen. He would talk even if they weren’t listening! He married Ruth Balding on June 24, 1976 and they would have celebrated their 45th anniversary in June. Ruth always said he was the love of her life. Dale and Ruthie worked side by side at their Phillip’s 66 station until their retirement.

He was deeply blessed and loved by his 5 sisters and 3 brothers.

Dear Cindy and all,
My deepest condolences on the passing of your dad. My heart reaches out to each and every one of you.
Rest eternal grant to him oh Lord, and let light perpetual shine upon him,
May his soul through the mercy of God rest in peace.

Kindest regards and sympathy to the entire Wilkerson family.

Kevin and Family,
So sorry for your loss…In Friendship and Sympathy