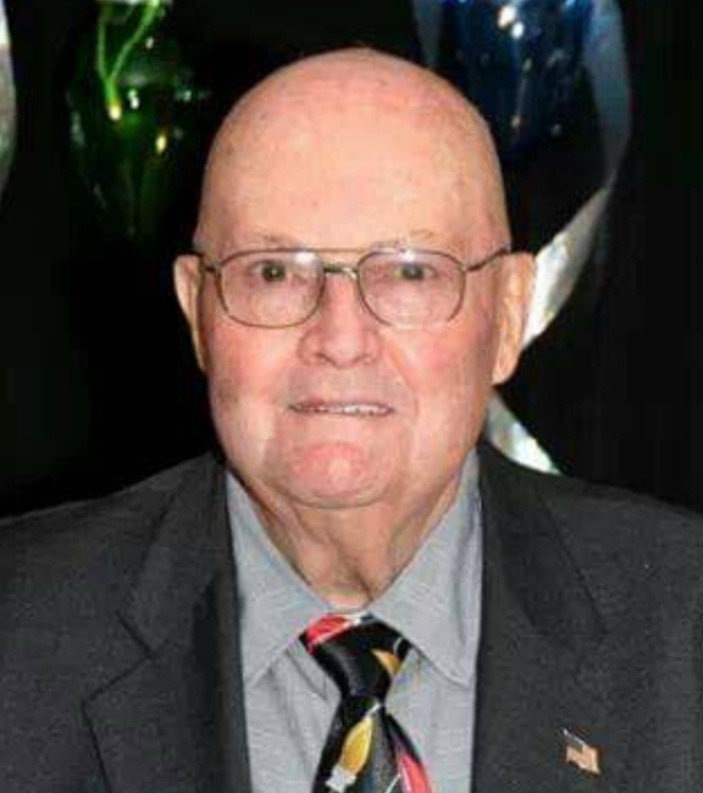 John E. Johnson was born in Joplin, MO, on May 5, 1936, to Alvey Wilson Johnson and Anna Myrle (Page) Johnson. John was a graduate of Joplin High School, class of 1954.  He was very active with his school alumni and enjoyed going to his high school reunions and reconnecting with old friends. He played offensive lineman in high school football that led to a football scholarship at Joplin Jr. College. He worked as a tool and die maker machinist his entire adult career. He was a hard-worker with impeccable work ethic and took pride in all of the things he worked on throughout the years that contributed to his society and community.

John loved camping with his family, and could snuggly pack a trailer for the trip to the brim. If mom needed it to go, he found a spot for it. He loved fishing and swimming with his children and family. He would often vacation at Big Sugar in Southern Missouri, often extending the vacation for the family, but would go back to his work duties and return to camp each day after he got off work.

John was a handy man and could fix anything that needed fixing. If there was a way to repurpose something, even after the point of no return, his frugality would find a way to make it work. Caring for his family of six during the 70’s lent him a ton of creativity in saving money down to the last dime.

John loved singing, and had a beautiful tenor/baritone voice, often singing in church and weddings. Standing next to him during church and hearing his booming voice is a cherished memory for his daughters.

John married the love of his life, Glenda Nell (Gillion) on June 20, 1958, and remained faithfully and lovingly married until her death in March 2013. Their marriage led to four children, and the fostering of three more. If you needed parents or a family to love you, you would find a place in their home. Their love for each other and their family is a true example of what a Christian marriage looks like. Raising their children to love God and love each other was their primary goal, and they achieved it with distinction.

John took pride in service to his church family, and served as a deacon. His Abundant Life family and weekly bible studies became a staple and his greatest joy during the week. For a while, he proudly remained Wii bowling champion or high scorer at his weekly “old men’s” bible studies. His love for others carried through not only to his family, but his friends and neighbors. If he saw a need, he would take care of it. He loved serving others and showing them they were worthy and that they mattered. He was a master of conversation and could engage in any topic with ease. This led to endearing friendships throughout his life and people just generally liked him for the all-around great guy he was.

While John never served in the military, it was his greatest regret that he couldn’t do so. His signature outfit on the daily was jeans, a flag t-shirt, red white and blue suspenders, and a USA or eagle ball cap adorned with numerous patriotic pins. Growing up in the 30’s and 40’s, you can bet he was a true patriot and proud American.

He is survived by daughters Julie Diane Gregg (Dean) of Lee’s Summit, MO and Mary Patricia (Trisha) Moore (Pat) of Belton, MO, and daughter-in-laws Susan Pagel and Cindy Johnson. He also developed a love and kinship for his daughter in Christ, Lisa Hinkle.

Funeral services will be at Langsford Funeral Home, Lee’s Summit, MO, on Wednesday, August 26, at 11am. Friends may call prior with a visitation at 10am.

Memorial contributions may be made in John’s memory to the Abundant Life Church food pantry in Lee’s Summit.

We will miss dad so much. So sorry love you guys.

Condolences to the family. Mr. Johnson was in my Sunday School class. Always a joy to be with …
June Jacobs

I’m so sorry to hear about John’s passing. I first met John a few years ago through my sister, Lisa. John would sit with my uncle Billy before church and have coffee. My uncle really liked John. Occasionally John would come to my sisters for a family dinner or holidays. I enjoyed talking with him. He will be missed. I am praying for the entire family. May God give you comfort and peace.

I’m very sorry for your loss. I know he loved you girls and his grandkids. You are in my prayers. My love to all.

It was my pleasure to have met your Daddy.

We were in Sunday School with John at Abundant life. We were so grateful when he was willing to lead the singing . John came to all our socials and everyone enjoyed being with him and he always made something good to eat. John loved his family and loved sharing about them. He announced the birth of every great grand baby. He will be missed. Iris Standridge

My heart is aching for you and your family. Your Dad was truly a treasure and he always had a smile on his face every time I saw him. I hope and pray you will find comfort in the many memories hold close to your heart. ❤

To know Mr. Johnson was to know everything about the Lord, hard work and love of family. Looking back to all the many times I was blessed to receive one of those big bear hugs makes me smile! The uncertainty if I was going to survive the gentle giants grasp found me laughing with Trish afterwards. The entire Johnson family is love…Mr. Johnson I know you are rejoicing in heaven with the love of your life, sons, and family members that have waited patiently for the reunion. I will always have fond memories of your dad Trish and Julie! I love you both, I pray for peace and strength in the transition into life without your daddy!❤?❤

Deepest sympathy of the loss of your father! He was a gentle giant, with a huge smile and encouraging words! Your parents love for each other was story book and they are united together in eternal life!

Our hearts and prayers go to your family. Your father and grandfather was a wonderful Christian gentleman and faithful to the Lord. John was a gentle soul and a blessing to all who knew him. ?