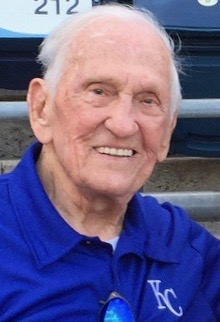 John J Sakmar of Lee’s Summit, MO, passed away October 3, 2018. A John Knox Village resident for 14 years, John was recently feted on his 100th birthday by family, friends, church family, JKV family and NBC’s TODAY Show. He also celebrated the milestone by renewing his driver’s license for 3 years. A hot air balloon ride was canceled due to weather, but he did skydive indoors at iFLY. Born in Detroit on June 18, 1918, John was active in his church, as Usher, Greeter and Eucharistic Minister. A decorated WWII Army hero, Staff Sergeant Sakmar served for 5 ½ years, spending 26 months in the Aleutians and the balance in the European conflict with the 2nd Armored Division, 41st Infantry, in the Battle of the Bulge. A series of miracles brought him safely home. He went to Washington, D.C., in 2014 with the Honor Flight. With a warm smile, quick wit, compassionate heart and generous spirit, John flourished as a career hospitality industry leader, managing hotels in Michigan, Ohio, Texas and New York as well as St. Louis and Kansas City. An avid golfer, he played Pebble Beach on his 70th birthday, St. Andrews Old Course on his 80th, and shot a hole in one at 90. John loved music, playing the trombone, singing with Gospel legend Andraé Crouch and writing an original song just a week before his passing. Devoted husband to Joan for 58 years until she passed in 2010, he is reunited with her in Glory. John is survived by daughter, Leslie (Gary) George; son, John Jr.; and grandchildren, Alexander and Gabrielle.

Leslie so sorry to read of the passing of your father .. lost mine a year ago and Mom 4 years before that., prayers for you John and family .. Sheila and Bob

John always shook my hand walking up for communion. He was so gentle and warm to my family and my newborn son. He was a patient of mine a few times as well. I will miss hearing his cane walking up behind me during communion; alerting me to his presence and the shoulder pat he would give me to signal the hand-shake we always did at church. We will miss him greatly. The Taylor’s.