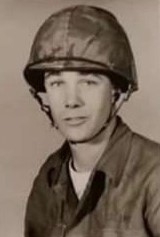 John Leslie Owens, 77, of Spring Hill, KS passed away peacefully at home at sunrise on Wednesday August 11th, 2021. Retired 1st Lt USMC 20-year veteran of the Vietnam War, as so often John did in the service of his country, he embarked on his final mission to be with the Lord at the roll muster call of dawn.  A true American patriot, his love of country, cats, were paramount, with a calm insightful ability to tell stories about his life and travels and experiences that were traits defining the man that he was.

Born in Springfield, MO during wartime in Oct, of 1943, John joined the United States Marine Corps on his 17th birthday, starting a 20-year career served honorably with decorations and achievements, recognition and two college degrees that propelled him into a successful business career after service including climbing to CEO president of the company after exiting the service. Also notable was the educator that he was, in various government agencies.

His love of cats was a huge aspect of his life, his ability to communicate and befriend them and find homes for them was well known thru the community. Other hobbies were country music and nightlife related to it later in his life, and his love of gardening and green space of his residences were things he talked about and reflected on often.

John is preceded in death by his parents James Arley and Elizabeth Adelaide Owens; Son, John Owens Jr., Siblings preceding him in order of age were Arlene, Gladys, Jim, Charles, Jerry, and Donald.

Services will be held August 19th, 2021 at Langsford Funeral Home, in downtown Lee’s Summit MO. Visitation will be from 10-11am followed by a service at 11pm. Travel afterward to Leavenworth National Cemetery for a military honors burial will follow at 130pm in Kansas.

I’m so sorry to hear of John’s passing. This has been a sad year for so many of us and I’m so upset by his departure. He was responsible for my adoption of my cat Teddy. Sadly Teddy was only with me three years but during that time we visited and John kept up with the joy he brought me. John was with me when Teddy crossed the bridge. I’d like to think that the good John did for all his feline friends lives on in happier lives for years to come. I’m also from a Marine family and that bond was important to us also. It was a delight to know John and I hope this note will help you understand how his legacy continues.
Mandy
Semper Fi