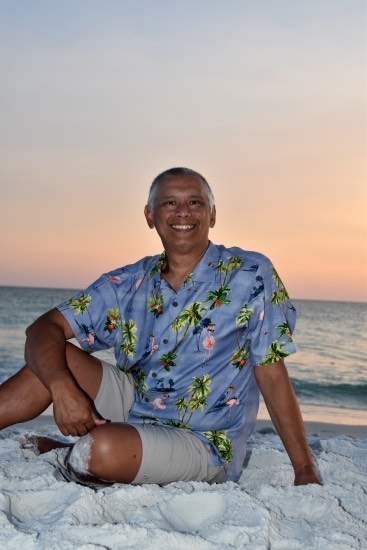 Joe Perkins, age 49, passed away on July 10, 2021 at his home in Lee’s Summit, MO with his loved ones at his side. He had a courageous 17 month battle with pancreatic cancer.

Joe was born October 1, 1971 in Saigon, Vietnam to John Perkins and Tuyet Chau. He moved to the United States in 1973 and grew up sharing time in Iowa with his dad John Perkins and stepmom Pat Perkins and in Oklahoma with his mom, Tuyet, and stepfather, Tony Chau. He graduated high school from Hinton High School class of 1989 in Hinton, IA and graduated college with a marketing and business degree from Wayne State College in Wayne, NE.

Besides spending time with his family, Joe loved playing cards with his friends, enjoying Cardinals Baseball, Iowa Hawkeyes, golfing, and going on beach vacations. Joe dedicated the majority of his career to Lockton Affinity. He served proudly for 18 years up to June 2021 with his latest role being an Assistant Vice President of Client Solutions. He worked on various programs over the years ensuring his client’s needs were covered.

We will be celebrating Joe with a Casual Beach Attire Celebration of Life with a Visitation on Thursday, July 15 from 6-8pm and Memorial Service Friday, July 16 from 10-11am at Langsford Funeral Home. Rosary to be said at 9:45am on Friday. Lunch location to be announced at service.

So very sorry for your loss.
Wishing you peace and comfort during this time.

My deepest condolences to the entire family! You will all be in my prayers through this difficult time. I’m so glad Joe is no longer in pain and you took time to make his last moments count! Rest In Peace Joe! Hugs to you all!!!

So sorry for your loss. Need anything just call me.

I am so sorry Julie. Sending hugs and prayers

May memories of the love you shared with Joe comfort you. He will always be by your side.

Sophie, my little honorary “granddaughter “, my heart aches for you sweetie! I never remember you once saying ‘stepdad’, it was always just ‘Dad’. That is an honor to him! He would be proud!

Julie, you were so good for each other! You gave him your children to love! And he gave you love and support for your children and career. You both were blessed in your marriage. In time, I know you will find joy in your memories. I am praying for comfort and peace for you and your children.

Sending wishes of peace and comfort during this difficult time and always as you mourn such a great loss to your family.

My heartfelt condolences on your loss. My thoughts and prayers are with you and your family.

So sorry for your loss, my thoughts are with you.

Keeping you and your family in my prayers.

My thoughts and prayers are with you and your family at this difficult time! May you have comfort and peace and remember only the good times!

Words fail to express my deep sorrow for your loss. Sending healing prayers and comforting hugs.

Sorry for your loss Julie. Sending hugs your way. Rest in peace Joe.

Oh, Julie – I am so very sorry for your loss. You and your family will be in my prayers for comfort and peace.

Julie
My heartfelt condolences to you and your family during this time of sorrow. My thoughts and prayers are with you.

Our deepest condolences to Julie and family. Living with such a loss is extremely difficult. But, living without ever having experienced the love that was shared would be tragic. The experience and memory of that love will give you strength through this difficult time. Embrace the warmth of that love, and live.

Joe was a great co-worker and a true gentleman. He made customer service look easy as he was always out to take care of both sides of the situation. You were very fortunate to have him as your family member.

So sorry for you loss. My thoughts of comfort & condolences to you & your family.

So sorry for your loss. Thoughts and prayers to you and your family.

My heart goes out to you. Losing the one you love is so hard. I know the days and months ahead will be a big adjustment, so please give yourself a lot of grace. I’m praying for peace and comfort for you.

My deepest sympathies go out to you and your family. May God give you the piece that you seek.

Julie,
I’m so sorry for your loss. Please know that you are in my thoughts and prayers.

Joe was the first corporate boss I had. While he managed a team throughout the years, he was a friend and beloved to everyone in the growing office. Joe dedicated so much to his clients and his coworkers, and we’re all better for it. We already miss you tremendously, you’ll always be in our hearts.

Julie, I am so saddened to hear of your loss. My condolences and prayers to you and your family. May sweet memories comfort you in the days ahead.

I am sorry for your loss. I remember when I found out that you and Joe were a couple and I could not have been happier for both of you.

Joe will be missed so very much.
Karen Axford

I’m so sorry for you guys. I will never forget how much of a loving, caring and giving man joe was. I am sorry I cannot make it to the funeral, please reach out at anytime if you guys need anything.

Joe was a great man in every way. Heaven is rejoicing now that Joe is home. Our sincere sympathy to his entire family. God bless you all.🙏🙏🙏🙏

Julie, so sorry for your loss, I hope you and your family can focus on the good times and find peace in all of those memories.

I’m so sorry for your loss. Please know that you are in my thoughts and prayers

So very sorry for your loss. Thoughts and prayers of comfort for the family during this difficult time.

I am very sorry for your loss. Joe was an ideal coworker and friend. He welcomed me into the Lockton Affinity family and was a mentor along the way. He will truly be missed.

Very sorry for your loss, my thoughts and prays are with you.

Our hears ache at the loss of one of ours. Joe will be missed but live on in our hearts forever. Keeping Joe’s family in our thoughts and prayers.

Julie, so very sorry for your loss.
My deepest sympathies to you and your family.

Julie and Family,
I am so inspired by Joe’s ability to stay positive and how he kept helping us at Lockton Affinity during his battle with cancer. Joe hired me, trained me and managed me for most of my 6 years at Lockton. During that time, I had some physical struggles and he used his best judgement in every case to see I could have time for the care I needed. He was this way with everyone and showed us his compassion as well as his expertise in insurance.

We grieve his passing and for those of us who worked on his team, he will forever be remembered for who he was as a person and the example het set for all of us.
Sincerely,
Pam Castrey

Julie, we are so sorry for your family’s loss. May you all find peace during this time. Praying for you all.

My heartfelt condolences to you and your family on the loss of your husband. Will keep you in my prayers and may his soul rest in peace. May God give you the courage and strength during this hard phase.

Julie – you and your family have my deepest condolences. I am praying for your peace and comfort during this incredibly difficult time.

So sorry for your family’s loss.

What a beautiful man inside and out. Loving life to its fullest. Cancer is so unfair and has taken this beautiful man from all he loved and those who loved him. Julie I know your loss is tremendous and so unfair. Our hearts ache for you and for all of us who knew such a great man. God bless to all as it is so raw at the moment. We remember Joe with his great smile and he leaves us smiling knowing him and being a part of his life no matter how short.God speed and God bless
Marc and Nancy

I never had a huge opportunity to get to know you well when we worked together Joe, but from what I did see of you near my desk you were a very kind, compassionate, and loyal man. I’ve admired your relationship with Julie and the family you have built together. Many prayers for your loved ones during this time.

Julie,
So sorry for your loss. I know words can’t begin to express the depth of your grief right now.
Thinking about you as you walk through this new season of balancing grief and growth.
Feel free to feel all of your feelings and grieve with patience. This is such a significant loss and you deserve to grieve that.
All of my compassion to you during this time.
–
Lauren Hiskey

Joe’s family is in our hearts losing one of our own is breaking. Prayers and thoughts for the family.

Julie & family~
I am so very sorry for the loss of Joe. He truly was a gentle, thoughtful, caring, loving man. I can’t imagine your loss but I know that Joe is with you every step. How lucky he & your children were to have the connection and love they shared. My hope is that with the passing of time you are able to reflect back on all the memories and be grateful for every single one, taking comfort that for a short time the two of you were one. Joe will be missed by all those who had the pleasure of knowing him. I am sorry to have missed the service. I am family with Nancy & Marc Hansen & they have kept me in the loop. Much love to you Julie.
Emily Harris Marasco

Our thoughts and prayers are with you and your family during this time.

You are in our hearts, thoughts and prayers at this time. We are so very sorry for your loss of this wonderful person!

I am so sorry for the loss of Joe. He was a sweet guy and my thoughts and prayers are with the entire family. May he rest in peace.

I am so sorry for your loss. My thoughts are with you and your family.