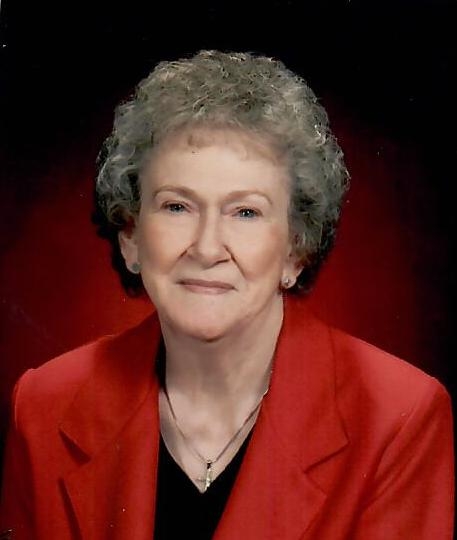 KATHLEEN BELLE (KATHY) HERITAGEKathy, 94, of Lee’s Summit, MO, went to be with the Lord on February 20, 2022. Kathy was born February 19, 1928, in Wheaton, MO, to Ray and Lulu (Cartwright) Hurlbut. She attended grade school and high school in Wheaton and Kansas City, MO, graduating in 1945. She met Charlie, her husband, in the summer of 1945 while he was home on leave from the Navy. They became engaged while he was home on leave. He returned home from overseas in April 1946, and they were married May 1, 1946. They made their home in Kansas City, MO, where Kathy settled down to being a homemaker and Charlie started driving busses and streetcars for the Public Service Company in Kansas City. He later went to work for the Ford Motor Company in Claycomo, MO, where he worked for 33 years as a Fire and Building Inspector. To this union was born three children, Charles Michael in 1948, Gary Lee in 1950, and Vicki Lynne in 1952.

Kathy went to work for the Western Electric Plant in Lee’s Summit, MO, in 1960, and retired from there in 1983. They enjoyed many activities over the years. They both belonged to the American Legion Post, Rogerson-Harvey Post 76, with Kathy serving as President and Secretary of the Women’s Auxiliary, and Charlie serving as the Commander. They belonged to several different bowling leagues. But car racing held their interest the longest. They attended the Indianapolis 500 for 38 years straight. They belonged to the Central Auto Racing Boosters since 1964 and were made Lifetime Members in 1974. They were active in C.A.R.B. for 24 years, holding offices each year. They both worked at I-70 Speedway in Odessa, MO. From 1969 through 1976. Kathy kept records on the drivers and made pay off. Charlie was a Pit Steward. Soon after, they turned their attention to live country music. They travelled to Branson, MO, at least once every month to see the Pressley’s perform. They had season tickets every year up until 2004 when Charlie was unable to attend due to health problems. They also enjoyed attending the Big Creek Country Show in Pleasant Hill. MO, becoming close friends with everyone in the show.

Church and family were always important in their lives. They belonged to Trinity Baptist Church in Kansas City, MO, for 10 years, and High Point Baptist Church in Raytown, MO, for 38 years. They then move their letters to Oakwood Baptist Church in Kansas City, MO in 1999. Charlie and Kathy both loved Christmas Eve, when they would feed and gift 32 or more family members every year and count their many blessings.Kathy was preceded in death, by her parents, her brother Cliff, her sister Margarite and her husband Charlie of 59 years. She is survived by two sons, Mike (Janice) of Warsaw, MO, and Gary L. (Glenda) of Lee’s Summit, MO, and one daughter, Vicki of Blue Springs, MO. She is also survived by 7 grandchildren, Lezlie (Ken), Shelly (Larry), Carey, Gary Jr., Aaron (Heather), Suzie (Vick) and Michelle. Also, great grandchildren Jayla, Erik, Drew, Justin, Layla, Charlie, Kinzlee, Amelia Erin, Stephanie, Colin, Amanda, Amelia (Mia), Adam, Derek, Lucy, Magnolia (Maggie) and many nieces and nephews.

In lieu of flowers, donations may be made to the Oakwood Baptist Church Benevolent Fund.

Dear Heritage Family, So very sorry about your Mom. Kathy was a lovely, sweet, kind & caring Lady. She was loved & will always be remembered. I’m so Thankful for her love & friendship. You All are in my thoughts and prayers. Sincerely, Millie Tyler

I’m so sorry for your loss Vicki. I know that there are no words that suffice. Your Mother sounds like she was a wonderful and interesting woman. She I’m sure is in the hands of Jesus. Prayers for you and your family during this time of grief.

To the Heritage family,
We send our sincerest love and comfort during your time of bereavement. I’m sure your grandma had an influence on the incredible family we are so lucky to have as neighbors. Rest well Mrs. Kathleen.
Sincerely,
The Hill-Harris Family

So sorry for your loss. My payers are with you and your family. May God give you comfort.
God bless you,
Beverly Copes