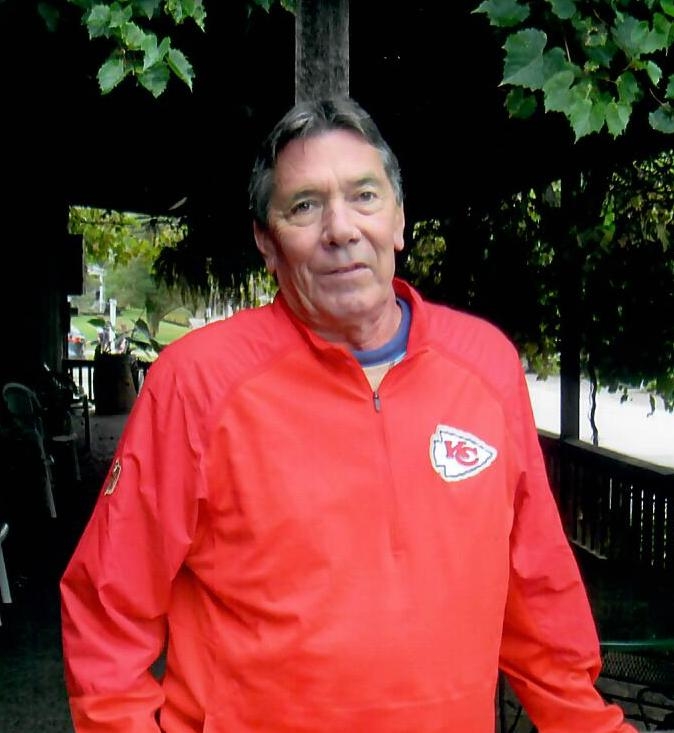 Kent was born on August 25, 1955 in Jackson County, Mo. to Warren and Betty Edmonds. As a boy Kent was in Boy Scout troop 370 in Platte Woods, Mo., he transferred to Tribune, KS where he obtained his Eagle Scout rank and later served as a Scout Master. After graduating from Park Hill High in 1973, Kent attended Missouri Western State University in St. Joseph, Mo., Western Wyoming Community College in Rock Springs, WY., and finally University of Colorado. In 2005 he met the love of his life, Tracey Pfister, and they married in July of 2006. In 2017 Kent retired from the City of Independence as a Journeyman Power Plant Mechanic.

In leu of flowers, memorial contributions may be made to the Melanoma Research Foundation or donors favorite local animal shelter.

We are honored and blessed to call Kent our close friend. He made life fun and was always ready to do anything for you.
He loved Tracey so much.
We will so miss him.
He has a special place in our hearts!
We love you Kent and Tracey.

When I think of kind, caring, loving, and laughing, I think of Kent. The past couple of years, he showed me what strength truly is. He was a gift. He was a blessing. He always had a way of making people feel at ease, and oh, how his wit made me laugh. His love for Tracey showed me what unconditional love truly means. I pray for comfort and peace for Tracey and family through this difficult time. His many friends, too. Rest In Peace, my friend. Gary and I miss you, but will carry you in our hearts forever.

Dear Tracy,
My heart goes out to you in the loss of your precious Kent.
You and your family are in my thoughts and prayers. I am sending tons of love and hugs and praying for comfort and strength in the days ahead.
Blessings, Wanda Neves, ( Gary’s sister)

Oh my Kent my pop pie!! I miss you! I was truly blessed to have you in our lives .. So many fun, loving great times we shared with you and mom! Going to miss your jokes and your smile! You brought so much Love to all of us!! I love you ❤️ Love the Murkin’s always and forever !

I worked along side Kent for 4 years at the Greeley County School. He was such a great guy and I enjoyed our conversations and work environment. He will be greatly missed here in Tribune. To the Edmonds siblings. Your dad was the best boss and friend to me and my family. I was so happy that he and Tracey found each other. They completed each other. Your Dad spoke of all of you often. You are all in our thoughts and prayers. We are honored to have been a part of all of your lives. May God keep his hand on your shoulders and comfort you through this difficult time.

Kent was a kind and wonderful man! He loved his wife, Tracey, with all his heart. All you had to do was spent a short amount of time with the two of them and you knew Tracey was truly the love of his life and he was hers! Kent was a great friend to my husband Greg and me. He was like a brother to Greg! As Greg’s neurological disease slowly progressed over the years, it was very important to Kent to treat and talk to Greg like he always had. He wanted Greg to keep his dignity. Kent was a kind and gentle soul! We will miss him dearly, but have so many fun and wonderful memories we will cherish of the good times we spent with him and Tracey. Tracey, of course, you have been in our thoughts and prayers during this hard time and will continue to be………

We love you both!

Oh, where to start….We are very fortunate to have gotten to know and spend time with both Kent and Tracey. Kent is one of the kindest, gentlest people we have ever known – never getting angry or raising his voice at anyone. He seemed quiet to those that didn’t know him well but he always had a funny zinger for those who knew him well. We already miss him dearly.
Pies & Bucks forever!
Love you Big Pie and Little Pie!

Earth has no sorrow that heaven can not heal. It is our faith and trust that gets us through this life and through death.
Tracey, you have been my friend for over 50 years. (How that is possible is a miracle in itself because we aren’t that old!) I was so happy for you that you found Kent. He was your soul mate and your breath. Few people have gotten to experience what you two had with each other. It wasn’t the length of years, but the life and depth within those years that matter. You two brought out the best of everyone with your laughter and love. He will always be with you, in your heart and your memories as he will be in his family and friends.
Rest in Peace my friend. God hug your family and friends with comfort and may someday their tears turn into smiles knowing they were blessed to have known you.

We were so sorry to hear of Kent’s passing. We enjoyed knowing him in Tribune. He was always helpful and always had a quiet sense of humor we loved. We pray that God will give Tracey and children His Comfort and Strength.

I met Kent through Mandy , it was her moms ( Tracey’s ) husband , always smiling , kind and always so fun to be with , my heart hurts for Mandy and Tracey and their family ! But will always remember him as a fun , caring loving man ❤️

There was no one more fun than Kent. He worked so hard and could fix anything. Worked with him in Tribune at Greeley County Schools. Rest in pease Kent. You will be truly missed. My heart is heavy at this sad news.

We didn’t realize we were making memories we just knew we were having fun…thanks for your friendship and the memories.

In Loving Memory…
Those we love don’t go away,
they walk beside us every day.
unseen, unheard, but always near,
still loved, still missed, still very dear.

Tracy, I am so sorry to hear about Kent. I know that he was a kind and wonderful man. I want to send love and prayers to your family. Your cousin Paula Madden

I was a teacher at Greeley County schools while Kent was there. He was always ready to help. He made sure that my son completed his Eagle Scout project-the airport sign. It still is there.I will always be grateful for his help with that project. Prayers for his kids and Tracey.

Tracey and family,
I am so sorry for your loss. I was blessed to know Kent and have him as part of our family in Tribune, as I am the great aunt of his kids. They rented my duplex apt for several years. Kent is the only renter I had who raised his own rent rent. We had kept the rent low for him and his kids on purpose, but he said he didn’t feel right about not paying more.
One other time he had me pull Laurie’s loose tooth because he just couldn’t bear to do it.
That’s how I will remember him- kind and gentle.
May you know God’s comfort and my prayers are with you and all the family.

Words simply can not express my true sorrow for the loss of a best friend of a lifetime. The emptiness I feel is quickly overwhelmed by the memories of laughter and joy we had together. I’ll see you on the other side my friend.