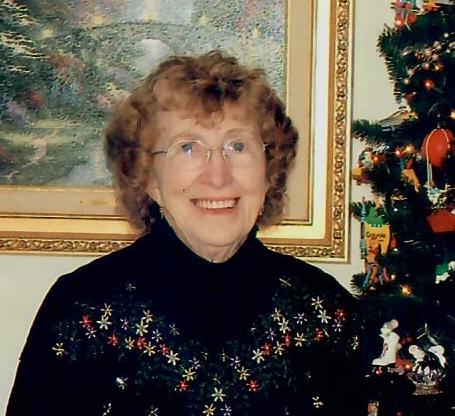 On October 1, 1931 Loretta June Gudde was born outside of Holden, Missouri. She and her older brother Ernie were raised on a farm north of Holden to parents that believed they could do anything. During WWII she was standing outside with her father (Henry) when a P-38 flew low overhead. She looked at her dad and said “Someday I’m going to fly something like that”. He told her to go for it, and years later she did.

Loretta’s first marriage to Larry Wright gave her both a son and in 1959, her first private pilot’s license (the first of many). They loved to fly their old 65 hp Champ (The Bluebird) any time they could. They were later divorced.

In 1964 she married Garnett Gene “Jonesy” Jones. Jonesy had run the FBO’s at Max Swisher Airport in Warrensburg and at the old Heart of America airport in Kansas City.  When they married, Jonesy was a pilot for Braniff Airlines and, as she describes him, an airplane addict. Jonesy would get off work and head to East Kansas City Airport in Grain Valley to give flying lessons. She decided if he was going to the airport, she was going to tag along. She convinced him to further her flying education and he did. In that first year she got her MEL, Instrument, and CFII.

Her first flying job was for John Hamilton giving passenger rides out of East Kansas City Airport. She flew people over Kansas City downtown, family farms, or whatever the occasion called for. One of the most fun jobs she had was flying the Chiefs to charity functions in the 60’s. The players called her Ma and were very protective of her. Loretta and Bobby Bell developed a deep friendship and respect for each other that continues to this day. One time when they were out of town for a function a gentleman tried to pick her up in a bar. He asked her where she was sleeping – when she told him between Buck Buchanan and Bobby Bell his eyes got big and he left. What she omitted to tell him was that they were in three separate room. She still laughs to day about the expression on his face.

Her next move was to Executive Beechcraft at the Kansas City Downtown Airport, where she was Chief Pilot and Director of Flight Operations. Mr. Meisinger (owner of Executive Beech) found out about Loretta and asked Dick Browne, Head of Operations “Why did you hire a woman?” When Executive Beech expanded their operations a few years later in St. Louis, they hired a man as the director of Flight Operations. This time Mr. Meisinger asked “Why? Couldn’t you find a woman?” While at Executive she got her FAA Check Airman Designee and was able to give check rides from Private to ATP and Tyoe Ratings in just about everything Beech made.

Throughout all of this, she was also doing wing-walking, flying air races and giving flight instruction. She started wing walking in the mid-60’s for Harold Krier (World Champion Aerobatic Pilot). Harold had taught Jonesy to fly aerobatics, which is how she met Harold. She told Harold to “Go as low as you want, just don’t get grass stains on my cap!” In 1974, Jonesy passed away in an accident while working on his seaplane rating. While she taught numerous people to fly and gave that many check rides to, perhaps her most famous student was Kansas City native and pro-golfer, Tom Watson.

In 1994, Loretta’s achievements were recognized when she won the “Pioneer Women of Aviation” award. In 1998, she was inducted into the Women in Aviation Pioneers Hall of Fame and was further recognized that year by the Missouri House of Representatives. In 2017, she was awarded the Wright Brothers “Master Pilot “Award for her contributions to aviation.

Services will be on Saturday, July 10 at Langsford Funeral Home, Lee’s Summit, MO. Visitation starts at 10 am, service at 11:30 am.

She will be missed. A true professional and mentor to countless pilots. It was an honor to know her and work for.

Loretta – you have always been an inspiration, a role model, and one of the most fascinating people I have ever known. I love you and will miss you always.

Loretta was one of a kind, she was a great mentor and wonderful friend/boss. We had some great/fun times back in the late 70’s, it was a privilege to have known her. Her spirit will continue to “fly high” for years to come, she was the best!!!

It truly saddens me to hear of Loretta’s passing. She was an inspiration to an untold number of pilots and everything general aviation in the Kansas City area. It was an honor and privilege to work for her at Executive Beechcraft. Fair skies and tailwinds Loretta.

Loretta was one of the best bosses I ever worked for. Jack I’m very sorry to hear of Lorettas passing.

So sorry to hear this. Indeed, I was not only one of the students she trained, but also a successful ATP candidate on one of her many checkrides given. She was so much fun to fly with and/or just hang out in any other capacity as well. She will be deeply missed not only by me, but all who knew her.

She sounds like such an amazing woman. I would love to have met her and to hear her stories. What a wonderful role model. So sorry for your loss.

It isn’t easy to find a pilot in the Kansas City area whose life and career hasn’t been touched by Loretta. When she made you her friend, you became family. Many great stories begin with “I was flying with Loretta and….” She will always be legendary.

I definitely need to piggyback on Vern Gerber’s remarks above with one minor variation: Loretta Jones is not only one of the best bosses I ever had, but probably THE best boss I ever had. Her flight department is the only place I ever worked where I actually never felt like an employee, if that makes sense. I mean, I was there for nearly 5 years, received a regular paycheck, and so I presume I was an employee, but it was hard to tell if Loretta was your boss. She was really good with her employees. I’ve been gone from Executive Beechcraft for nearly 31 years now, and have likely forgotten a co-worker or two during that time. But I have never and will never forget Loretta Jones. My sincere condolences, Jack, to you, and the family.

Loretta was a giant in the aviation world she could do it all. She will be missed

Loretta gave me my first aviation job after college. On my interview, we hopped into an airplane type that I have never flown. Flying east from KC, she pointed at a small airport and said “Land there”. That runway was the smallest I had ever seen, even to this day. So, with an airplane I had no experience in, I landed on a very skinny runway. Then she pointed me to the airport in Grain Valley where there are tricky winds at the touchdown point, and I landed. On the way back she said “I think you will do” with a grin on her face. The entire time she carried on a wonderfully entertaining conversation with me as if I did this all the time.

She proved to be a wonderful lady to work for and she gave me memories I will never forget. Loretta started my 43 year career in aviation. I could not have had a better start, a better friend or a better second MOM.

I will always miss her, she has always been there, a friend, a role model, a mentor and a hero. Besides the gazillion check rides, she never turned down a request for a guest lecture or a special appearance at an aviation event.. She is the matriarch of KC Aviation!
Thanks Loretta

I was honored to have her in my cockpit on a few occasions. BLUE SKYS LORETTA

I always was in ahhhh of her my dad (Frank) and mom(Pauline-Markley-Coogan) took me to see her at an air show where she was wing walking. It was so amazing. She came to our house several times. What a great strong woman. Love to her family. You have great memories.

Loretta-I was only at Executive Beechcraft for a short time, but my memories are full of my first flight instructor job. You were an amazing person to work for. So knowledgeable and so kind. I am so grateful for all the opportunities, and all of the stories! You made a difference in my life, and even though it’s been many years, I’ve never forgotten you. God bless you on your final flight.

Loretta, I wanted to see you one more time, but covid wouldn’t allow it. You did so much for John in getting our airport business going at Grain Valley. You did even more for me (along with Jonesy) in teaching me to fly and inviting me to fly in 3 different Powder Puff Derbies with you. How exciting to finish the race at No. 8 out of about 104 ladies who started. This was all because of you and your outstanding flying. I’ll always love you and your memory, and Your son, Jack, will always seem like one of my kids. May the Lord keep you in his arms. Helen

Thank you dear Loretta for believing in me & giving me the opportunity to work for you at Executive Beechcraft! Thank you for teaching me to stand strong & stand up for what is right. Thank you for helping me grow into the pilot I’ve become…without you I’m not sure how my career would have been…thank you so much for your support! More than flying, I’m so thankful you are in the presence of Jesus & that one day I will see you again. God bless Jack & David & the rest of your family as they continue the journey without you. You will always be a part of me! Much love, Shannon