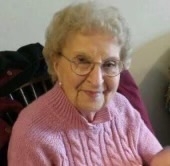 Born September 23, 1925, in Larned, KS, Margaret was the 7th of 9 children born to Verdie Young and Callie Alma Creekmur Young. The Young’s lived in Rozel, KS until they moved to Archie, MO when Margaret was 16 years old. Margaret graduated High School in 1943 and, due to the need for teachers as a result of the war, took summer college hours at Warrensburg to pass the teaching exam. Margaret went on to teach in a country grade school in Rozel, KS (1943-44) and Lone Tree school outside Harrisonville, MO (1944-45). In 1944, Margaret met Robert Foster who provided maintenance at the school. They were married on December 23, 1944. That following October their daughter Judy Marie was born, followed by Gerald Lee in 1948 and James Robert in 1954. Margaret worked in the telephone office for extra money until moving to Urich, MO in 1958. In 1961, Margaret took a “temporary” job with Western Electric (now AT&T) in Lee’s Summit. She planned to work for 6 months but ended up retiring 26 years later! For the first 11 years, she rose at 4:30am to carpool to work and then carpooled home at 4:30pm before finally moving to Lee’s Summit in May of 1972. Unfortunately, her husband, Robert, passed away the following year due to a prolonged illness.

Margaret loved God and her family ferociously. She was also a lifelong learner who loved to read and travel! Due in part to her daughter, Judy, being a flight attendant with Braniff Airlines, Margaret was able to travel to: Nova Scotia, Prince Edward Island, Jerusalem, South America, Canada, Taiwan, Ireland and most of Europe, as well as every state in the Union.

Margaret is survived by her two sons and daughters-in-law: Gerald and Agnes Foster of Lee’s Summit and Jim and Kathy Foster of Jefferson City; Brother Leroy Young of Carthage, MO; 6 grandchildren: Melissa, Jon, Becky, Matt, Abby and Jordan; 6 great-grandchildren: Anna, Sara, Sydnie, Vivian, Cohen and Piper; and many, many nieces, nephews and cousins.

We are so sorry to hear this news. Margaret was a wonderful person to know, and a good friend. We will miss her.

So sorry for the loss of an apparently well traveled well loved and well read beautiful soul.

Thinking of you all as you celebrate Margaret’s remarkable life. Your memories shared with her will always be with you. Hugs🙏

Being 80, Aunt Margaret was my my role model. She was a beautiful example of a life well lived. I know all of her family has a hurting heart, but how blessed we all are having her, as Derryl would say, “IN OUR COURT,” Condolences and peace to all that loved her.