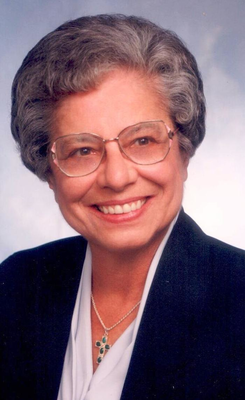 Twenty days before Christmas 1932, Mary Ann was born the fourth child to George and Edna Nicholas in Wheeling, West Virginia. As the baby sister to two brothers and a sister, Mary Ann proved time and again she could carve out her unique place in an immigrant family whose members each had strong and unique attributes.

From an early age, Mary Ann exhibited confidence, determination and moxie, the type of which was generally unfamiliar to young girls along Warwood Avenue. She was very much her own woman growing up, avoiding stereotypical roles. She frequently challenged neighbors to all-or-nothing games of marbles in the alley behind her house. Much to the chagrin of her mother, she also played football with the neighborhood boys and pursued new frontiers on her bicycle in Wheeling.

Favorite family lore tells of the time Mary Ann defied her mother’s rules by riding her bike down Riley Hill Road, a famously sharp and curvy descent. Midway down, the brakes failed, sending her careening toward a busy intersection at the bottom of the hill. She somehow managed to navigate to a stop by rolling into a trash heap in the city dump. What she was not able to do was avoid her mother’s wrath when she found out.

Edna’s mantra of “There is no such word as can’t” fostered a family of consummate achievers. This became the fabric of Mary Ann’s very being, and as the youngest child, she raised her own bar. Mary Ann never shied away from challenges. Rather than quit when faced with the most daunting, she would simply noodle on a different approach, relying on her faith in God and her solemn belief in the power of prayer.

Mary Ann graduated with honors from St. Joseph’s Academy in Wheeling and Duquesne University in Pittsburgh, PA, with a double major in math and chemistry. At the time of her graduation, most of her female peers were pursuing teaching or home economics degrees.

Upon graduation from Duquesne, she married Ronald Lee Wickham, second son of the Wickham’s grocery store chain. Because the marriage between a Catholic and non-Catholic was frowned upon by the Catholic Church and forbidden by her religious family, Mary Ann and Ronnie eloped and moved to Kansas City, MO. There they settled down and raised five daughters.

Ronnie died unexpectedly just 16 years later, forcing Mary Ann into the role of single parent and breadwinner for five young children. While still mourning the loss of the love of her life, she recalculated her future.

She dusted off her double major and charted her own career path. At a time when medical technology was a just emerging field, Mary Ann worked her way up in the lab of Daniel Azarnoff at the KU Medical Center. Dr. Azarnoff’s laboratory was conducting then-cutting-edge research into cholesterol levels and their impact on the human body. This remained one of her proudest career contributions in the field of chemistry. After her time at KUMC, she also worked for the USDA and Dickey Little John in Auburn, IL.

Mary Ann was a modern woman operating in a pre-feminist era where women took notes rather than made notable career accomplishments. Mary Ann encouraged her daughters to become independent, strong women. She insisted that her girls pursue careers that they were passionate about and then work to be their best. Around many family dinnertime conversations, she said, “Be anything you want, even the garbage collector, but be the best garbage collector you can be.” Most importantly, she wanted her daughters to know in their hearts they could stand on their own two feet in life.

Mary Ann was a poet and writer. Although she never published, she exercised her craft by corresponding with two of her forward-thinking mentors－Sister Mary Grace and Sister Immaculate. She has left a treasure trove of wisdom in the form of saved letters from those decades.

Later in life with daughters raised, Mary Ann returned to being an avid reader, particularly of mysteries. On a daily basis, she completed the KC Star’s crossword puzzles and cryptograms, and she would never turn down a Scrabble challenger.

No matter what life threw her way, she never lost her sense of humor. Mary Ann gravitated to humorists such as Erma Bombeck and felt a kinship with Hallmark’s Maxine for their wry, tell-it-like-it-is humor, earning her own moniker of “Grouch.”

In lieu of flowers, the family requests that you donate to the National Stroke Association at www.stroke.org in Mary Ann’s name.

Mary Grace you and your family are in our prayers. Sincerely Mary and your colleagues at IBM

After Uncle Ronnie passed Aunt Mary Ann raised five lovely ladies: Margie, Rhonda, Grace, Ruth, and Monica. My deepest condolences are extended to her daughters who continue to share with us Aunt Mary Ann’s spirit. Some people are luckier than others. I must be the luckiest man in the world because Aunt Mary Ann was my Godmother. She taught me that sarcasm is a lost art of humor and not politically correct. Her ability to “shock” people with a quip and relay their anxiety instantly with her smile was an art form that no one can equal. Even during her last days, I still experienced her warmth and humor. I felt like she was comforting me with the warm look in her eyes and soft clasp of my hand. Obviously, she also let me know that she did not want to be coddled. Aunt Mary Ann was a rock of strength for us even as she was becoming weaker. Now we cannot share her touch but can share our memories of this fantastic lady who graced us with her contributions to our lives.

I was lucky enough to work with Mary Ann at FGIS. She came up to me one and said … Goodson, would that be Katherine and Howard and I said they are my in-laws, Mary Ann said, so which one did you marry. I said Earl, she then proceeded to tell how when she lived in Raytown my husband as a child use to take his pants off and climb her fence … Oh she had more stories to tell about those Goodson boys … everyone of them were true too. Mary Ann was a mentor to me, a friendship I truly valued. We had long talks about her girls and how proud she was of each and everyone of them and how she prayed they knew how much she loved them. I would always tell her they knew. I would love to watch her talk about Ronnie, oh her eyes would sparkle. Oh the love she had for Ronnie it showed every time she spoke his name. You all are in my thoughts and prayers, may God wrap his loving arms tightly around you so you feel his love/comfort and strength. God Bless and much love to you all. HUGS. Janine and Audie Goodson.

I have had the privilege of being a long time friend of Mary Ann’s daughter Rhonda. The many traits of Mary Ann (confidence, independence, intelligence, and a great sense of humor) were definitely passed along. My cherished memory of Mary Ann and the Wickham family occurred at a college graduation dinner for Rhonda. Something humorous was said and all the Wickham women were laughing – but no sound was heard. I guess it is another family trait. Mary Ann allowed me to stay at her home when I was a new graduate looking for a job. Her humor and sarcasm were always evident and appreciated. My condolences to the entire family.

My deepest condolences on the passing of Mrs. Mary Ann Wickham. I am privileged to know her daughter, Rhonda, from college where Rhonda and friends graciously adopted me into their group. I only met Rhonda’s mother one time and miraculously passed the test for myself and another friend of Rhonda’s to camp in the Wickham basement for a night. Mrs. Wickham’s humor was enjoyed. Despite my very limited interaction, as I read the attributes ascribed to Mrs. Wickham, it fit perfectly as these were clearly evident to me through her daughter, Rhonda. Mary Ann will be missed dearly by her daughters, family and friends but we’ll celebrate her life and find comfort, strength and peace knowing that she is in heaven keeping everyone on their toes. May God bless all of you abundantly with those gifts that you need.

You will forever hold a place in my heart. From the memories we created and the wisdom you shared, you are missed and loved completely.