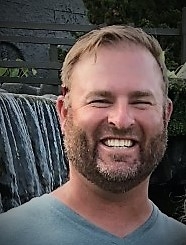 Michael “Brett” Harrel, aged 49, of Blue Springs, Missouri peacefully passed away on September 16th, 2022, at home with his family by his side.

Brett was born on July 30th, 1973, in Duncan, Oklahoma. He entered the United States Navy in 1993. He was stationed on the USS Abraham Lincoln. He traveled, went to war, and made some lifelong friends. He was honorably discharged in 1999. Brett was awarded Navy Good Conduct, National Defense Service medal, Armed Forces Expeditionary medal, Sea Service Deployment Ribbon, Southwest Asia Service with Bronze Star, Humanitarian Service medal and the Kuwait Liberation medal.

He moved to Blue Springs and transitioned to civilian life. Brett obtained his B.S. in Business Administration in 2004. He worked for various companies throughout the years, Kansas City Southern Railroad for 13 years, and was currently working for Louis Dreyfus Company.

Brett had multiple passions in life. Coaching wrestling and baseball were highlights of his activity career. He was a perfectionist but loved to have fun. He never coached soccer but enjoyed the game, watching and playing. A close second to coaching is OU football. Of course, with any game comes grilling, hosting parties, and socializing. As time went on, he had more time to do water sports, fish, and boat.

Brett was predeceased by his father, Merle Harrel, in 2015. Brett learned his love of fishing and boating from his dad, and of course his “secret” fish fry methods.

Memorials can be made to the Harrel family, for them to donate to the charities of their choosing.

What a tremendous loss for everyone who knew Brett and the strangers along the way who briefly saw his smile. I worked along side Brett at LDC, for 3 years and he was more than my boss, but my friend, who I will miss dearly.
I am so honored to have met and known Brett. May the memories comfort all of us and his dear loving wife Shea, Brett’s family and Maverick who will miss his buddy.

Sending our love and prayers to everyone that loved this special man that we were lucky to share a niece and two nephews with. I was blessed to have met he, Shea, and the boys last year and to experience first-hand his vivaciousness, generosity, orneriness, hospitality, and magnetic personality. What a smile! And a story-teller extraordinaire…truly a tragedy to lose so soon the light he brought to this world. Prayers for comfort and peace to all trying to come to terms with this unexpected goodbye. You will be remembered always, Brett!

I shared a cubicle with Brett for 6 years during my time at KCS. Brett was a great guy with lots of fun stories to share. I know he loved his family and baseball (I got to work with him during the Royals World Series win and he really enjoyed it). I am sorry for the loss of Brett he really was a special person who I know will be missed dearly.

Brett was very special to me from getting to meet him at 6 weeks-Through his life adventures, spending some holidays with him and his dad- Which was my husband & my best friend. Brett was fun to watch in his sports and keeping up with him throughout his life. I will miss our calls and exchanging pictures – You will be missed Brett – praying for Shea and kids and Chris & his family. Love Always Phyllis

Our family knew Brett’s dad, brother and Brett himself for his entire life. Great family and they were very proud of Brett. Was a joy to watch Brett grow up in Duncan and then lost touch with him for many years but was able to become reunited again at KCS. A pleasure to know and you could tell by how much enthusiasm he had when talking about his family that he was genuinely happy with his life. Great person and will be missed.

We were lucky enough to to have Brett share his knowledge and passion of the sport of wrestling with us for several years. Having he, Shay, Remy, and Brogan be part of our extended wrestling family was a blessing. So sorry for your loss, thank you for sharing you husband, and father with us, we are all better for it.

The Chief Red Mat Raider will be sorely missed.

Saddened and shocked to know of the untimely demise. I had a very brief chance to work with Brett over the past couple of years, and he was always very helpful, supportive, and a great professional.

May God give the family, all the strength to bear this huge loss.