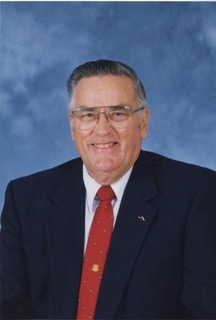 Richard Allen Joos was born in St. Louis, MO on June 2, 1934. He was the middle son to his parents Albert and Virginia, who also had an older son Bob and younger son Ron. After he graduated from Owensville High School in 1952, he immediately joined the Navy at age 17. He was stationed in California and did various jobs for the Navy but ironically never boarded a ship. On one of his leaves from the Navy, he met the love of his life, Mary Lee Troesser, on
a blind date in Union, MO. After receiving a few dozen homemade cookies in the mail, that must have sealed the deal. On March 17, 1956, they were united in marriage. He was discharged in 1955 and then came back to Missouri and worked for a body shop. His uncle told him the Missouri State Highway Patrol was looking for new recruits. He took the exam never thinking he would pass it. He did pass that exam and after training, became the 337th State Trooper at age 21, which made him the youngest Trooper in the state. Also, 337 was his badge number. They were stationed in Sedalia and that is where their daughter Alison Jane was born in 1959 and son Mark Alan was born in 1963. In 1970 he was promoted to Corporal and they moved to Lexington. Then in 1973, he was transferred to Troop A Headquarters in Lee’s Summit. He was later promoted to the rank of Seargent in 1975. While in Lee’s Summit, he became heavily involved in the Boy Scouts Troop 220 with his son, Mark. They attended the H. Roe Bartle Scout Reservation and became tribesman in Mic-O-Say. His tribal name was Two Bears and Mark’s name was Little
Two Bears. These names were given to them by Chiefton, Merle McConnell (Twin Silver Moccasins), which was an honor. The family has many life long friends because of their involvement with Scouting. He joined the National Guard in 1983 and enjoyed the limited time he served until he left in 1989. In that same year, he retired from the Missouri State Highway Patrol after 34 years of service. He was retired over 32 years.
After his retirement at the age of 55, he and Mary enjoyed traveling by taking 2 trips to Europe, one with his daughter and her family, a ski trip to Colorado with the whole family, and many trips to Truman Lake to enjoy their 2nd home. They were excited to become grandparents when their daughter, Alison, welcomed 2 sons, Cody, in April 1994 and Matthew, in March 2000. He enjoyed riding 4 wheelers and swimming with the grandkids. His time with his family was very important and he was so proud of them.
Richard and Mary were married for 44 years until her unexpected passing in September of 2000. He moved to John Knox Village in 2010 and enjoyed his time traveling with his son and daughter-n-law and also spending time and attending Church and other functions with his friend of 18 years, Lena Estes, until her passing in 2019. He kept busy with various activities in John Knox Village, and one of the things he enjoyed for many years was his Monday afternoon poker games with his buddies, which he never missed, and this often took precedence over anything else. He was a long time member of the Lutheran Church and his faith was very important to him. In his later years, he rarely missed a Sunday service.
He was preceded in death by his wife Mary, and his brothers Bob and Ron. Survivors include his daughter Alison Ralston of Greenwood, son Mark (Julie) of Greenwood, grandsons Cody Ralston of Osawatomie, KS and Matthew Ralston of Blue Rapids, KS.

The family wants to thank Phyllis Hale, his neighbor and good friend, for becoming a very important part of our lives in the last few years. In his last few weeks, she was still able to make his face light up when she walked in the room. We also want to thank all of the wonderful doctors and nurses who took such good care of him at St. Lukes East Hospital.

We are saddened to hear about Dick’s passing. Your family is in our thoughts and prayers during this most difficult time. Our hearts are heavy that we are so far away at the time you need the support of friends. We’re sure Mom, Dad, Dick and Mary are catching up in Heaven now. Please let us know if there is anything we can do.

May God be with you and keep you in His care.
Gil & Melody Houchen

Worked with Dick for many years on the Patrol. Was very dedicated and exemplified the high standards required to represent the Dept. A personal friend also. One of the good ones. Will be missed by family, friends, & co-workers.

Dick was a great guy, I just now learned of his passing. I worked with Dick for several years at Troop A. Always a gentleman, and a great representative of the Highway Patrol. God Bless him and your family at this sorrowful time.

My Condolences to all,

Dick was a great guy. I just learned of his passing. I worked with him during my career with MoDot. He also served on the Board of Directors with me at our credit union and enjoyed our once a month breakfast get together along with other Patrol and MoDot retirees. He’ll be deeply missed.

I’m sorry, but I just found out about Dick’s passing. I live at John Knox, work part time at the Highway Patrol as a 1,000 hour employee. One of my co-workers, Beth Manley, told me about this. Her dad & Dick were best friends. My deepest sympathy to you all in
this great loss.