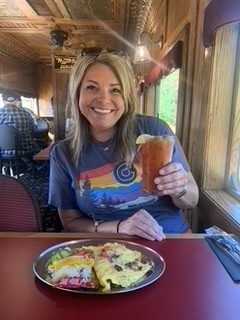 Richele Brooke (Slaughter) Ross made her way to her heavenly home with the Lord Saturday, May 21, 2022 at St. Lukes East Hospital with her family by her side. She was the daughter of Richard and Anita Conner Slaughter born November 11, 1970 in Kirksville, Missouri. Richele graduated from Kirksville high school in 1989. After high school she went to college and graduated from Southwest Missouri State University, now known as Missouri State University with a degree in business finance. She was employed at American Century Investment before her employment with Waddell and Reed at the time of her illness. On September 19, 1998, Richele married Travis Ross, and from this union two children were born. Richele never failed to provide above and beyond for both her children. She was heavily involved in all her kids’ activities. She was Lee’s Summit North High School’s booster rep for wrestling, track and field, and softball. Her hobbies included traveling, puzzles, singing in Woods Chapel church choir, board games, and planning and attending events for her family and friends.

Richele was preceded in death by her father Richard Slaughter.

Her survivors include her children Sydney Ross and Hunter Ross, her mother Anita Slaughter, her sister Kristina Slaughter, her brother Scott Slaughter and his wife Brandi, her nephews Jackson, Colton, and Lane, her niece Addison, and her several uncles, aunts and cousins.

Public visitation will be held from 9-10:45am on Wednesday May 25th with service following at 11:00 at Woods Chapel Church in Lee’s Summit, Missouri.

A graveside service will be held in Kirksville, Missouri at a later date.

In lieu of flowers, the family is asking for donations to American Cancer Society and/or support with the current gofundme, “Richele’s Fight is Our

So very sorry for your loss. Richele was an amazing and kind lady who loved her children beyond measure. Sydney and Hunter our prayers are with you. Richele will be greatly missed by all who knew her.

We are so sorry for your loss. Please know you are all in our thoughts and prayers.

Devastated to hear of Richele’s fight and passing. My thoughts are with you. I played softball with Richelieu for many years. Wonderful girl. KHS ‘88

I was Richele’s track coach in high school. She was an awesome runner and a great girl! My condolences to the family.

So many wonderful memories of my sweet Richele. As a toddler, her “thank you” was the cutest “tee-too” I ever heard and will never forget. Her love of sports began at an early age. There was nothing she wouldn’t try and, usually, she excelled humbly. I love you, ‘Chele. Eternity began too soon for my liking, but God said “come on in” and so– you went! Hug your Dad, Grandmas & Grandpas for me, but especially Jesus! ❤️ Aunt Debby

Anita & family –
We are so sorry for your loss. Cherish the moments & memories of her always! Our love & prayers 🙏🙏❤️Carolyn & Ron

My deepest sympathies to Richele’s family-her children, her siblings and her mom. Although we had not been in touch after we left high school, she holds a dear place in my heart. I’m sorry for your family’s loss.

So sorry to hear of this huge loss for all of you. I know too well how painful it is to have a child cross over before you. My thoughts and prayers are with you.

I am sorry for your loss. My thoughts and prayer to Sydney, Hunter and the family.

My heart goes out to Hunter and Sydney. I knew your mom through kids club and high school wrestling. She was your kids biggest fan and I don’t think ever missed a meet or game Remember to hold tight to your memories of her and know she is always with you. Hugs to you both

I am just heartbroken but I know God has a plan of why she was taken so young! She was an amazing lady, full of life and loved her children! I know her legacy will live on her her daughter Sydney and her son Hunter! They learned from the best! Sending thoughts and prayers and lots of love to you all to get through the days ahead! Here for you all always! Love you, Dana & Darren

Sydney & Hunter, I am so sorry to hear of your mother’s passing and was so sad to hear this news. I knew your mom from when you both were at Child’s World with my son’s Quinn and Owen. I would see you mother every morning as she dropped you both off and spent time at various birthday parties and pre-school activities with your mom. She was a great lady and great mom to you both. We are thinking of you during this difficult time and hope the wonderful memories of your mother help you. We are sending hugs to you both and wish you comfort. Love, Suzanne, Quinn and Owen Phillips

Anita,
I’m so sorry for your sorrow. My God comfort you and your family.

Dear Anita & family, Our very deepest condolences to all of you. May The Lord bless you and guide you through these dark days. Sincerely, Gyla & Randy

This family has been through so much. My heart goes out to my cousins and Aunt Anita. I am so sorry for all you have endured. I wish I could be there for the funeral. I will be thinking of you all and watching and am with you all in spirit. I love all of you so much. My heart aches and is broken by this. Till we can see each other again. I love each and every one of you so much. Emily

Deepest condolences to anita and families, may God wrap his arms around you! Linda rogers and freddie!♥️🙏

Anita- my heartfelt sympathy to you in the loss of your daughter. I can’t imagine your pain but pray that she is at peace and your memories will forever give you comfort. My prayers are with you and all of your family at this time of loss and in the days and months ahead as you remember her life and what she meant to you and all those who knew her.

Richele was always smiling, and full of positive energy.
She was my favorite softball and basketball mom when our kids played at North.
Very saddened to hear such a bright light has gone out.
Rest In Peace, sweet and beautiful girl.

We are deeply saddened to hear this. We did not know her but she had to be a very special person being the sister of Kristina Prayers for her wonderful kids and the whole family. Heaven gained another Angel

Hunter…my heart is hurting for you and your family. So sorry for the loss of your Mom. My prayers are with you.
Coach Pendleton

The last time I saw Richele was at our HS reunion in 2009 but her smile and her kind spirit have left memories for a lifetime. It’s impossible to think of her without thinking of her smile and her laugh. My deepest condolences.

Anita and family we are so sorry for the loss of your sweet daughter. Prayers and hugs from us.

Anita and Family…..
Words don’t seem enough to let you know how saddened we are to hear about Richele. Please know you are all in our thoughts and prayers. Sending prayers for comfort and peace. 💔❤️‍🩹

Sydney and Hunter,
I am so very sorry about the loss of your mother. I remember how involved she was when you were in elementary school, and it was obvious that she was a wonderful mother and loved you very much. My thoughts and prayers are with you both, as well as with your entire family.
Sincerely,
Mrs. Merrigan

Anita,
I am so sorry to hear of your loss. Know that my thoughts and prayers are with you and your daughter’s family.
Carolyn

Anita, I am so saddened to hear you lost your child. I cannot imagine how you have endured so many losses. You and your family are in my thoughts and prayers.

Anita, so sorry for your loss. Prayers for the whole family.

Anita, we were so sorry to hear about Richele. We cannot imagine the pain you must be feeling now. Our deepest sympathy to you and your family. “Another beautiful soul has found its way to Heaven” ~ Chris & Marilyn Bohon