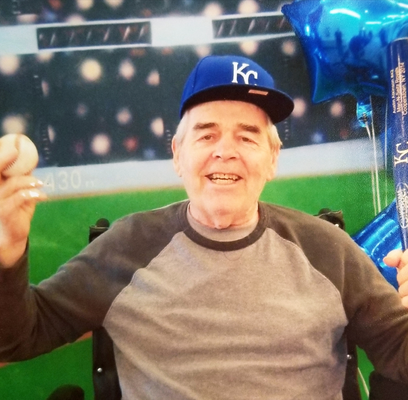 Robert Eugene Ebert, 80, of Lee’s Summit, MO shed his earthly bonds at 0530, February 3rd, 2018 while being lovingly cared for at KC Hospice House. He transcended his battle with Lewy’s Body Dementia. His services will be held Saturday, February 10th, 2018, presided over by Father Ernie Davis, at Langsford Funeral Home in downtown Lee’s Summit, with visitation from 10-11am and a memorial service from 11-11:30.

Bob was born in Kansas City, MO on October 1, 1937. He graduated from East High School in 1955. He entered military duty in the United States Army in 1956 and remained on active duty in South Korea until 1958. He was honorably discharged with medals for sharpshooting and good conduct. One year after returning to the States, he married Donna Caroline Jones on July 27th, 1959. He retired in 1987 from Western Electric (now AT&T). Now free, he pursued his passions of fishing, traveling, and playing cards with frequent forays to Canada, Truman Lake, Las Vegas, and Branson with his wife, Donna.

He is survived by his children, Christopher (Melinda), Stephen (Phyllis), and “Daddy’s Little Girl”, Diane (Alan) Scharrer; 10 grandchildren; 5 great-grandchildren; and 2 step-grandchildren. He is also survived by his brothers, Raymond Ebert, Jerry (Jean) Ebert; and sister, Shirley (Bill) Mandina, as well as many adoring nieces and nephews, cousins, and many friends.

Memorials may be made to Kansas City Hospice House, Lewy’s Body Dementia Foundation (lbda.org/donate), or to the Alzheimer’s Organization (alz.org) in honor of his sister, Shirley.

I am very sorry for your loss.

I am so sorry to hear of Bob’s passing. He was a great man and a great Grandfather to my kids. I will always remember his smile. May the family find comfort in the days ahead of his wonderful memories. May he rest in peace.

My condolences to the Ebert family from a neighbor in the old neighborhood. Prayers

In loving memory of Robert Ebert