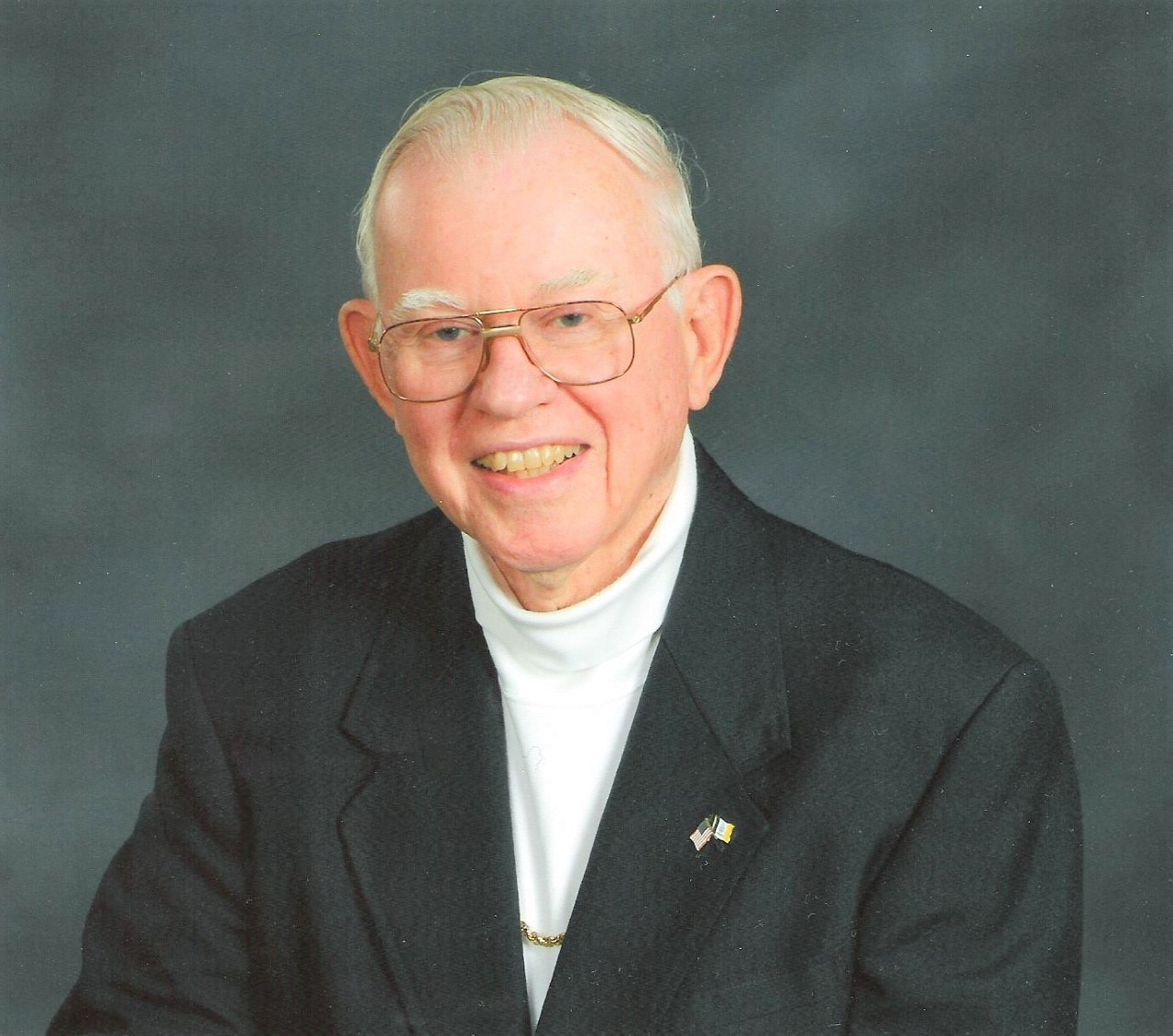 Robert (Bob) Edward Kennedy transitioned to the next level of his spiritual journey on August 23, 2020. Bob was born the only child of William Scott Kennedy and Helen Merle (Lyngar) Kennedy on July 16, 1928, in the front bedroom of his childhood home in Pittsburg, KS. He was a graduate of Pittsburg State University with a degree in Mechanical Arts. Bob married Lois Rae Taylor, also of Pittsburg, on August 13, 1950, and the couple spent most of their 55-year marriage living in the Kansas City metro area. Lois passed away in 2006.

Bob was known by many in Pittsburg as that “red-headed boy who delivers the paper”. He kept his route from 1942 through 1950 and it paid for much of his college education. During this same period he learned to play the clarinet and discovered a love of music that lasted his entire life. He played in marching band and concert band in high school and college and he amassed a large collection of vinyl records, cassette tapes, and CDs over the years. Wherever he was, music was there, too.

After college he worked for the Kansas Highway Department in Topeka and the Kansas Ordinance Plant in Parsons before joining Hallmark Cards in Kansas City as an Industrial Engineer. His career with Hallmark began in 1954 ended with his retirement in 1991. His initial responsibilities were to identify inefficiencies in production lines and operations. His talents were utilized regionally in the Kansas City, Lawrence, Leavenworth, and Topeka Hallmark plants culminating in his design of the production line and conveyor system for the Liberty distribution facility which opened in 1971. While working for Hallmark’s International Division he traveled abroad setting up operations in plants and facilities for the company all over the world. Bob’s love of travel and photography resulted in amazing stories and pictures of the many places he visited. Several of his wildlife photos were selected for use on Hallmark greeting cards. During these travels Bob acquired a large network of friends around the world. He would say he rarely passed through any airport in the world without seeing someone he knew.

Bob was involved in Boy Scouts and led a troop in the Brookside area for many years. When he and Lois moved to Lee’s Summit he started a troop in Lakewood for the boys out there. Going to camp at Osceola was part of the summer ritual. His troops benefitted from the knowledge of wildlife and nature he learned from his father during their many hunting and fishing trips. Through his leadership Bob guided his share of young men to the ranks of Eagle Scout.

After his retirement in 1991, Bob and Lois traveled frequently both nationally and internationally. With their shared interest in genealogy these trips often provided an opportunity to trace lineage and even meet distant relatives.

In 2010 Bob met Jeanne Decker. The two became traveling companions in 2011 and maintained a relationship until 2017.

During retirement Bob developed an interest in making chainmail jewelry. He liked to cut and polish unique rocks and stones he found during his travels and include them in his jewelry pieces. Before long he was holding classes to teach chain making to others. He became an instructor at the William Holland School of Lapidary Arts for many summer sessions.

Bob was a lifelong student of the Bible and history, reading everything he could find on these subjects. He was a deeply spiritual individual who felt a solid connection to his one Source/God. His core belief in the power of Love was demonstrated in his caring attitude, generosity, and positive outlook. Bob had the heart of a teacher and he was happy to share the knowledge he gained from his extensive reading. As a Sunday school teacher he delighted in augmenting the curriculum with information from his readings to enrich the students’ understanding of the subject through historical context and other authors’ points of view.

In lieu of flowers, the family requests you donate to your favorite charity as a tribute to Dad’s generosity and giving spirit.

My heartfelt sympathy to Kae, Kip and Karen in the loss of your dad. He was an inspiring To me and to many. Would not have had privilege of knowing him had it not been for the friendship of your dear mother. My thoughts and prayers are with you.
Kay

Hi Kae,
I am sorry for the loss of your father. I am also amazed that he had a long and wonderful life. Please accept my condolence and take care of yourself.

It’s not often we are fortunate enough to meet someone as enthusiastic and out going as Mr. Kennedy. Whenever we saw him, we always enjoyed his quick wit and whatever story he decided to share with us. I was blessed to have received one of his jewelry works of art. The angels will have quie a time with him! Blessings to all his family.

Bob,was a great gentleman and friend, We had such fun in the chain making class we were in. David Cherry, D.D. Storck and I. We learned so much from Bob, and all became better friends. He will be missed, and I’m glad to have known him. Iona Heck

My deepest sympathy goes to you and your family. He has definitely left you some great memories. Take care!!!

Kae and family, I am very sorry for your loss. May the memories of the past you all share be the strength for you in the future! Hugs..Amy and Lee Ann

I am so sorry i missed this email. Our condolences. It truly was a pleasure to meet and interact with your father. Our conversations to say the least….interesting. enlightening and informative. He lived a good, long, interesting and exciting life. We are blessed to have crossed paths. God bless you and your family. Doral and Katie Paris.

Dear Kae, Kip, and Karen, Very sorry to hear of your Dad’s passing. Our Dads shared a fond friendship for many years. They both had faith that they’d be renewing it now. My sincere condolences during this difficult time, Bill Haner