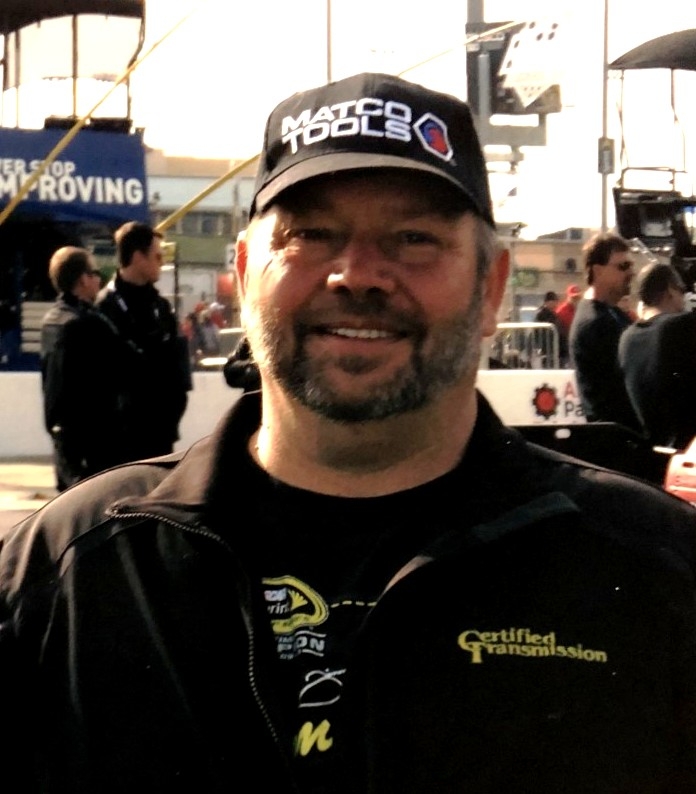 Robert “Bob” John Loegering, 55, of Lee’s Summit, Missouri, passed away on Friday, March 13, 2020 at Belton Regional Medical Center in Belton, Missouri. Funeral services are planned for 2:00 PM on Friday, March 20, 2020 at Grace Baptist Church in Lee’s Summit with visitation one hour prior to the service. The family will have a private burial at the Lee’s Summit Cemetery. Memorials and contributions are suggested to the American Heart Association.

Bob was born on September 11, 1964, in Jackson, Michigan to Donald and Anna (Bauer) Loegering. He was a lifelong racer, mechanic, avid fisherman, bowler, and loved fixing anything he could. He was well known for his blue and yellow PT Cruiser race car at Valley Speedway. He was a semi pro bowler and built his legacy at Summit Lanes, with a series of perfect games. Bob was a go to car guy. Any questions you had, he could answer over the phone.

Sorry for your loss. Prayers for all

So sorry for your loss…many wonderful memories come to mind…

Condolences to the whole family. Deepest sympathy and prayers to everyone of you deeply touched by this loss. Ray

Bobby was like a little brother to me when we were growing up. I would talk to him online from time to time and he was always talking about his kids and grandkids Rip Bobby you will be missed.

Rest in peace Bob! You will be missed.

Anna….I think of you often. So sorry to hear of the loss of your son. Prayers, my dear friend.

So sorry for your loss. My thoughts and prayers are with you! Love you all!! Mary Ann

Our thoughts and sympathy are with you and this sad time. May happy memories be with you.

Bob was a very generous man always tried to help anyone he could. Bob will be missed by all that knew him and definitely by all of us @ Valley Speedway. RIP Bob.

Our prayers go out to his family and closest friends.

I am so sorry for your loss.
It was a pleasure meeting and working with Bob. He was so knowledgeable in the automotive area. He was a hard worker.

Love and prayers to Anna, the whole family and all of Bob’s friends. We were sorry to hear of Bob’s passing. Bob and our son, Kevin, (who died over 37 years ago) spent a lot of time together and thoroughly enjoyed each other’s company. We can visualize them being together now and having great times again!

We have been praying for all.
So sorry Anna you are unable to go to Bob’ s funeral, may he Rest In Peace. May God be with all of you. Love and Prayers. Paul/ Barb

Kaitlin, Em and Jake
Thoughts and prayers with you all. I wish I had half the talent that your dad did. He was a very gifted person.
Love you Aunt Donna

Our thoughts and prayers ? to all family and friends. I have many good memories of Bob growing up as a kid. Bob will missed.

Our condolences go out to Bob’s family. He has been a vital part of our transmission business here at RAMM for many, many years. He was dependable, knowledgeable, and irreplaceable. Not only was he a friend, but he was like family to us. I know you are winning those races in heaven, Bob, coming in first will be easy and you are always number one to us.
Sincerely,
Jeff, Trish,
Terra, and Cody

This is from david and linda may. So sorry for your loss
RIP TO YOU BOB

Burt & I are so sorry for your loss and so sorry we cannot risk attending the services. We will be joining on-line however.

We were so glad to have been able to get to know Bob and will sure miss his smile and friendly conversations. We are so thankful to know that we will see him again in heaven and be able to celebrate joyously the fact that we all know Jesus as our Savior for all eternity. It was truly wonderful to watch him grow in grace throughout the time we had with him.

We enjoyed all the pictures of happy times with him & the family. We hope in time, those happy memories will be able to blot out the sadness and grief of this present time.

We have been and will continue to pray for Bob’s family.

What a beautiful tribute to Bob today. His smile is forever in our memories as well as his passion to help others. Our family was blessed by his automotive skills as he helped with our son’s car. Prayers to the family during this difficult time. May we celebrate the eternity Bob has with Christ!

Kaitlin, Em and Jake, We are so sorry ! It’s very hard to put into words. Bob will be missed, he has touched the hearts of many. We love you guys! If you need any thing let Russ and I know.
RIP Bob.