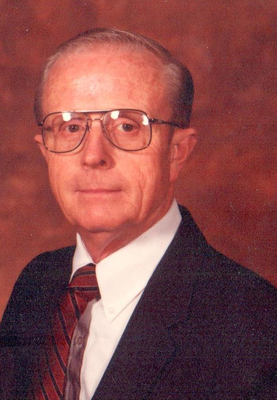 Robert S. Frye, 94, passed peacefully at home on May 10, 2018. Robert was born November 18, 1923 in Sedalia, MO to Bert & Laura Frye. He graduated from Sedalia’s Smith-Cotton High School, received a Bachelor of Science in Engineering from the University of Missouri Columbia, and his Master’s Degree from University of Missouri-Kansas City. He served in the US Navy during WWII. He worked 42 years as a District Engineer for Missouri Public Service Co and was also a contributing writer for professional engineering publications.

In 1950 he began his 60-year marriage to the love of his life Mary Catherine Palmer. Together they resided in Warrensburg & Lee’s Summit, MO and had two sons, Rick and Bob. He was a member of the VFW, American Legion, Masons, First Baptist Church of Lee’s Summit and was a founding member of the Lee’s Summit Lions Club. One of his greatest joys in life was working and spending time on his family farms.

The family is deeply grateful for the kindness & guidance provided by the many caregivers. Visitation will be held at 10:00am followed by the service at 11:00am on May 16, 2018 at Lee’s Summit’s Langsford Funeral Home. In lieu of flowers the family suggests donations to the Lions Club of Lee’s Summit or The First Baptist Church of Lee’s Summit.

Robert frye was such a nice and good man I loved getting to know him and his family I am so sorry for you lost and I hope you pull through this hard time.

So sorry to hear of your loss.

Rick, When I logged on to the Langsford Web site I was surprised to see your dads obituary. Sorry that he passed and I express my sympathy to both you and Bobby. It has been a long time since we have had any contact. I remember the vacation trip one summer that we used your Grand parents new Mercury and went to Hannibal and St. Louis. My first major leave baseball game and first stay in a hotel. I ran across a picture of you at one of my birthday parties in the late 1950’s. My wife and I live in Arlington, TX and will be returning to Lee’s Summit for my 50th high school reunion the weekend of June 8th, 9th, and 10th. Will be staying with the lady that actually rented your house on 2nd street in 1969. Her husband was my best man their daughter and son were the flower girl and ring bearer at our wedding. You were fortunate to have your parents much longer than I did. Mom died in 1972 and dad in 1998. He remarried to a woman that your mom knew. She came to Lillian’s funeral back in 2000 and we spoke briefly at that time. Feel free to contact me if you wish. Sincerely, Chuck Conine

Becky and I did not personally know Mr. Frye, but we are very well acquainted with his son, Bob. The knowledge of who he is leads us to believe that Mr. Frye was everything his obituary lauds him to be and more. Rest in Peace.

Our thoughts and prayers for the Frye Family.