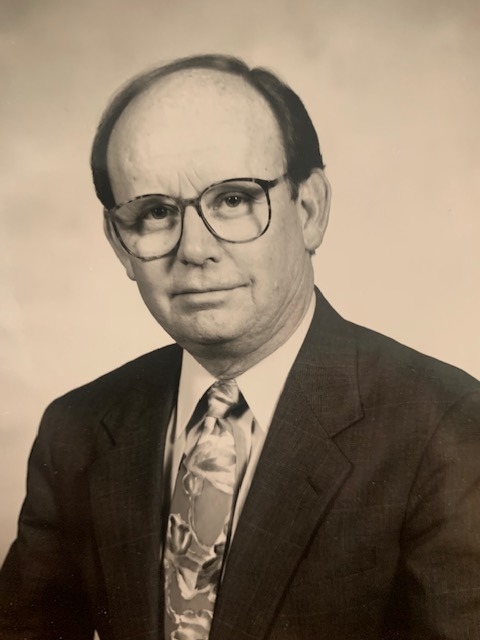 Ray went to the Miami High School, in Amsterdam MO and was employed by the Clipper Manufacturing Company shortly after. In September of 1958 he married Ruth Geiger in The Methodist Church of Kansas, Paola, KS, and they made their home in Kansas City.

Ray put himself through college, attending and receiving an Accounting Degree from Rockhurst College in Kansas City. One of the accounts he worked while employed at Price Waterhouse was The O’Brien Partition Company. He was solicited by O’Brien to be a major part of the ownership team and served as the CFO for many years. In those years, Ray mentored many and was key in growing the business, which was eventually sold when Ray retired in 1999.

Although Ray was an avid golfer during his working career, during retirement he was finally able to reap the benefits of his long hours invested in growing a business. Ray enjoyed many hours on the links, along with his wife Ruth, who was as good, if not arguably better than Ray, and their passion for the sport resulted in an achievement few golfers can claim. On June 13, 2003, Ray, 65 at the time and Ruth 62, each had a hole in one during the same round at the Shoal Creek Golf Course. They enjoyed, and revered, the notoriety of being featured in Sports Illustrated Magazine. Throughout his years of playing golf, Ray was a member of several golf clubs, but had a special place in his heart for Hillcrest Country Club.

Ray was preceded in death by his Parents; his Wife, Ruth Ann Hines; and his Siblings, Richard Dean Hines, Claude G. Hines, and Melba Pauline Crabtree.

Survivors include his Sister, Nancy Ann Hudson, and her husband Charles; Dear Friends, Holly Roberts Sodders, and husband Mark; several Nieces and Nephews and their families; and many friends who were like family, and are too many to list, living in the Kansas City area and Arizona. Ray will be remembered by many for his mentorship, competitive nature, compassion, empathy, kindness, and generosity.

Ray’s untimely passing was a great shock to me. I had spoken with him as recently as one month ago. We had a great “catch-up” conversation and made a tentative commitment to get together for a round of golf this fall.

I was lucky to meet Ray and the other executives at the O’Brien Company through my father-in-law Al Koenig, who served the company as VP of Sales alongside Ray in his CFO duties.

Ray was a class act by all accounts and fun to be around.

This great man will be missed by many. God bless you Ray!

Ray was a wonderful person, extremely smart, generous, and with a dry sense of humor. He was very good to my folks, Ed and Dixie. I will always remember him with warm thoughts.

Ray was a great person and a grand gentleman as well as a wonderful friend. We miss Ray and will always remember him fondly. We feel blessed to have had Ray in our lives. He was kind, loving, and generous to a fault. Ray was one of the good people in this world, and has earned his place in heaven.

Ray was one of the best men I have ever known. I feel blessed to have called him my friend. He was so very kind and giving to my parents, my sister and myself. He will be missed by so many.

We’re so sorry to lose such a dear friend and fellow golfer!

Ray and my husband, Kenney, shared cousins from different sides of their families. They also attended first grade together. It was a special pleasure for my husband to be a neighbor of Ray’s and, whenever together, they always had a wonderful time catching up on family and mutual friends news. Ray was a class act and will be missed by the Winterset Garden neighborhod. May he rest in peace.

I don’t even know where to start. Words cannot describe the importance he had on my life and career. He was at my wedding and was one of the first calls I made after the birth of both of my kids. He would always whistle!! He loved to eat lunch at Hillcrest Country Club and would always sneak me back a piece of pie! Sure wish I could tell him one more time how much I love him! He would always sign his emails to me as “ole Dad”. And to pay tribute to him I am going to clean my computer screen which was always one of his pet peeves to have a smudged computer monitor. Love you “ole Dad”. You will always be in my heart!!

Ray was a very good friend to us. We enjoyed going out to dinner with him and Ruth. We will be forever grateful to him for giving us Callie(the cat). She has been a blessing to us. Rest In Peace!

I had the pleasure of knowing Ray only 7 years, but they were seven enjoyable years of golf, shooting, and laughing ! What a joy it was have Ray in your foursome ! Always a smile, always your next shot was going to be the one and any day on the golf course is a great day ! No reason to complain, life is good , was his attitude! Rest In Peace Ray, see you on the other side ! The boys of Tonto Verde will miss you .

We are so sorry to hear about Ray. We are blessed that we got to be friends with him in Arizona. He was a fine man and he will be missed.
Willa and Jim

To the Hines family.
I was very sorry to learn of Ray’s passing. Ray and I worked together at Price Waterhouse for several years. We had dinner with Ray and Ruth several times but over the years as we changed jobs, we did not stay in touch. I remember Ray as very bright, a great sense of humor and very friendly. We lost a good man.

Ray was a wonderful friend and will miss you so much.

I didn’t know Ray long. I didn’t have to. He was my friend from the start. We played, we talked, we laughed. I’ll miss that because we can’t do those things anymore. God bless you, Ray!

We are truly saddened by the passing of a very good man. Ray was such a kind and generous man who we enjoyed immensely and considered to be a member of the family. It simply won’t be the same in future trips to Arizona. RIP Ray… we miss you.

Ray was a great man and will be truly missed